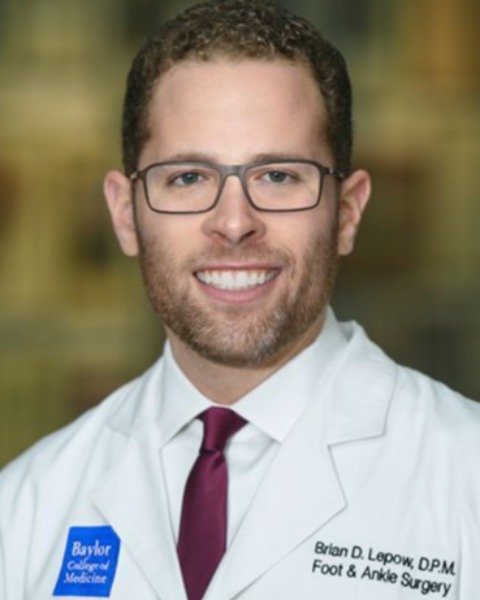 Brian Lepow, DPM is a board-certified podiatric surgeon practicing in Houston, Texas specializing in Diabetic Foot Amputation Prevention and Limb Salvage. He maintains staff privileges at all major medical institutions in the Houston area. Dr. Lepow holds dual academic appointments in the departments of Internal Medicine and Cardiovascular Surgery at McGovern School of Medicine in Houston Texas as well as at the Baylor College of Medicine in the Division of Vascular Surgery and Endovascular Therapy.
Dr. Lepow is a native Houstonian. He graduated from Westbury High School and attended the University of Arizona in Tucson, Arizona. He earned his medical degree from Barry University School of Podiatric Medicine in Miami, Florida. Dr. Lepow completed his surgical residency training at The Mount Sinai Medical Center in New York, where he served as chief resident in Podiatric Medicine and Surgery.
Following completion of his residency program he served as Fellow in Diabetic Limb Salvage and Reconstructive Surgery at the University of Arizona. In addition, Dr. Lepow held an academic appointment in the department of surgery at the University of Arizona College of Medicine.
It was during his fellowship that Dr. Lepow became acutely aware of the need for early diagnosis and formation of aggressive treatment plans in diabetics with lower extremity complications. He dedicates his participation at the Baylor College of Medicine towards improving patient outcomes in our immediate and extended communities.