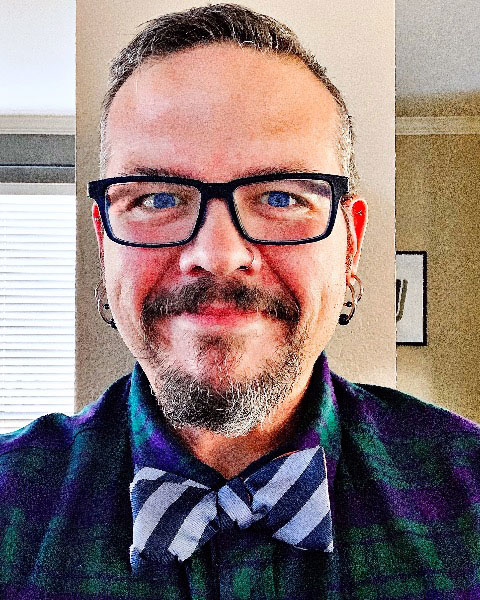 Neil Anderson-Himmelspach currently serves as Assistant Professor of Music Technology and Music Theory/Composition and is Director of the Electro-Acoustic Lab at TCU in Fort Worth, TX. Prior to coming to TCU, he served on the music faculty at Harford Community College in Bel Air, MD. He received his DMA from Florida State University, his MM from Central Michigan University, and his BM from Pacific Lutheran University.

His music has been performed throughout the US and Europe. His composition for solo alto saxophone, Vanguard, was a featured piece at the 2006 World Saxophone Congress, and his Symphony No. 1 was performed at the 2007 Southwest Regional College Band Directors Association conference. His published works include Salvador Dreams, a euphonium concerto with wind band accompaniment, Vanguard, McHenry’s Anacreonatic Song, and Symphony No. 1.

Neil has had a long-standing partnership with the animator and visual artist Dax Norman. Their scored animations have been featured at numerous venues, including the San Francisco Museum of Modern Art, Squeaky Wheel Animation Festival, Spike and Mike’s Twisted Animation, Oberhausen International Short Film Festival, a year-long installation at the Eventi Hotel’s Big Screen Project, Cartoon Brew TV, The Melbourne International Animation Festival, and the Cartoon Network. Neil was awarded the Individual Artist Award in Music Composition by the Maryland State Arts Council in 2012 and again in 2014. Additionally, he has received an ASCAP Plus Award and the Florida State University College of Music Citation for Outstanding Graduate Alumni.