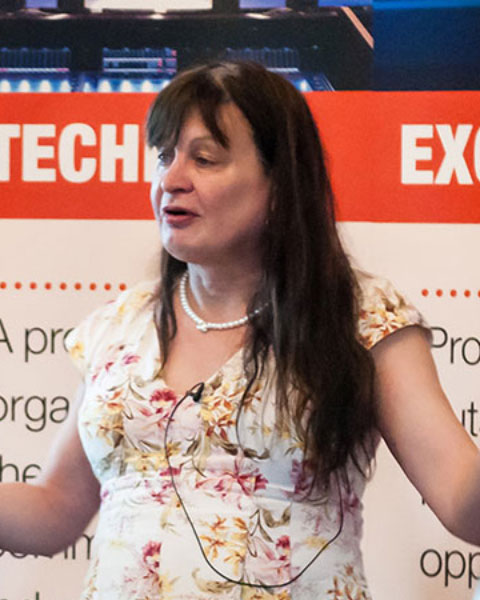 Jamie Angus-Whiteoak Is Professor of Audio Technology at Salford University.
Her interest in audio was crystallized at age 11 when she visited the WOR studios in NYC on a school trip in 1967. After this she was hooked, and spent much of her free time studying audio, radio, synthesizers, and loudspeakers, and even managed to build some!
After secondary education in Scotland, in 1973 she attended the University of Lethbridge in Alberta Canada. There, in addition to her studies in physics, music, computing, drama, philosophy, and english composition, she repaired their VCS3 synthesizer, and so obtained coveted access to the electronic music lab.
She then studied electronics at Kent (UK) doing her BSc and PhD there from 1974 to 1980. During her PhD study she became interested in A/D conversion, and worked on a sigma-delta approach, but had to give it up to concentrate on her Thesis topic of designing a general purpose Digital Signal Processor.
After her PhD she joined Standard Telecommunications Laboratories, who invented optical fibres and PCM. There she worked on integrated optics, speech coding, speech synthesis, and recognition in the early 80s, and invented a novel 32kBits speech coding method. She has been active in audio and acoustic research since then.
She was appointed as the BT Lecturer at the University of York in 1983, to develop the first integrated masters (Meng) in Electronic and Communication Engineering in conjunction with British Telecom. She then co-created the UK’s first Music Technology course in 1986 when it was considered a “silly idea”!
She is the inventor of; modulated, wideband, and absorbing diffusers, direct processing of Super Audio CD signals, and one of the first 4-channel digital tape recorders. She has done work on signal processing, analogue circuits, and numerous other audio technology topics.
She teaches audio and video signal processing, Psychoacoustics, Sound reproduction, studio design, audio and video coding, and loudspeaker and microphone design. She has co-written two textbooks and has authored, or co-authored over 200 journal and conference papers and 4 patents. She is currently investigating environmentally friendly audio technology.
She has been awarded; the AES Silver medal, an AES fellowship, and the IOA Peter Barnet Memorial prize, for her contributions to audio, acoustics, and education.
For relaxation she likes playing drums and dancing, but not usually at the same time.