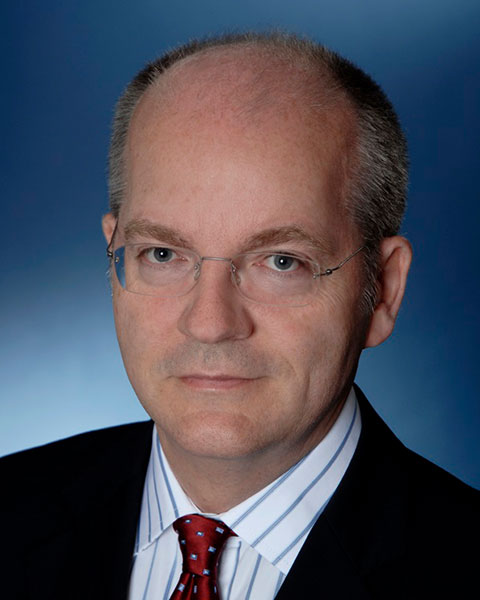 Prof. Dr. Thomas J. Vogl is Head of the Department of Diagnostic and Interventional Radiology at the University Hospital Frankfurt/'Germany.
He was born in Munich, Germany, in 1958. In 1982 he graduated from Ludwig-Maximilian University of Munich with an MD. In 1988 he obtained the degree of Assistant Professor at the University of Munich, in 1992 Associate and Full Professor of the Free University of Berlin, and in 1995 he was Professor at the Humboldt University Berlin. From 1991-1997 he worked as Senior Faculty Diagnostic Radiologist at the Virchow Clinics in Berlin. Since 12/1998 he has been Head of the Department of Diagnostic and Interventional Radiology at the University of Frankfurt. From 2007 to 2012 he was Vice Chairman of the Board of Directors at the University Hospital Frankfurt and since 2012 he has been Chairman of the Frankfurt Klinikallianz.
Prof. Vogl has mentored more than 30 undergraduate and post graduate research fellows, has published more than 500 scientific articles, had more than 1,000 presentations at national and international scientific and clinical conferences and has been awarded numerous prestigious awards, such as German X-ray Prize (Wiesbaden), Holthusen Ring of the German X-ray Society (Frankfurt), Prize of the French Association of Radiology (Straßburg), European Head and Neck Society (Karlsruhe), Magnetic Resonance Forum (Nizza), International Magnetic Resonance Prize (Garmisch), Pater-Leander-Fischer-Prize (München), Best Scientific Presentation ECR 2007. He is a member of multiple national and international radiological and oncological societies and editorial boards of journals such as Radiology, Academic Radiology, European Radiology, Radiologic Diagnostic, Radiographics, RoeFo, Radiologe, Journal of Vascular and Interventional Radiology. His scientific interest is on MDCT, MRI, ultrasound, interventional oncology, vascular procedures, evaluation of contrast agent, MR-guided procedures.