Purpose: Pemetrexed, which is used in the treatment of malignant pleural mesothelioma and non-small cell lung cancer (NSCLC) as a folate antimetabolilte, was developed as an anti-cancer drug with widely recognized efficacy and safety, and was developed as a lyophilized injection in the early stages of development. However, it has an inconvenient method of administration that has to be dissolved with a 0.9% NaCl injection prior to administration and be finally diluted with a 0.9% NaCl injection to be reconstituted. Besides, the manufacture process of freeze-drying formulations are complex and costly, and may be exposed to users during reconstitution. The following study was conducted to develop a stable liquid injection in liquid formulation but also can be used immediately without reconstitution process.

Methods: Lyophilized formulations of pemetrexed are unstable in the water solution because the main ingredient, pemetrexed disodium, is degraded by oxidative stress. In order to develop a stable liquid injection solution, antioxidants were used and a degassing process was added using nitrogen to prevent degradation by oxygen. Antioxidant screening was performed using major antioxidants which are available for injections as drug addictives. In addition, the degassing process has been confirmed by the stability studies for 6 months under the accelerated condition(40℃, 75% RH) after deaerating the dissolved oxygen and headspace(HS) oxygen in vials.

Results: Of the antioxidants, monothioglycerol(MTG) was most effective in improving the stability of the pemetrexed injection, and the optimal concentration range(0.75~1.00mg/mL) was established to enhance its effect. In order to improve the drug stability, dissolved oxygen and vial headspace oxygen limits were set not more than 1 ppm and 1%, respectively, to minimize the oxygen contact, and the impurity results also found to comply with limits for 6 months of storage under the accelerated condition. 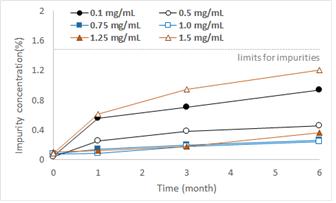 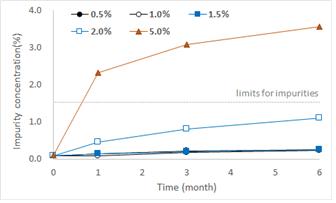