Purpose: To describe the application of Slope Spectroscopy® (measurement of absorbance at variable pathlength (1)) in the measurement of hemoglobin derivatives by multicomponent analysis. The example of bovine hemoglobin and the quantitation of hemoglobin derivative concentrations is shown.
Multicomponent analysis has been routinely used to measure concentration of antibody drug conjugates (ADC’s). The range of protein concentrations compared to the conjugated drug presents a challenge for UV fixed pathlength spectroscopy due to the spectral limitation of low concentration derivatives (2). Slope spectroscopy resolves the issues with fixed pathlength by manipulating the Beer Lambert Law and varying the pathlength to attain the ideal range of absorbance. With this approach, strong linear correlation can be achieved, and a wide range of concentrations can be measured.

Methods: Co-oximetry standards for hemoglobin derivatives (Carboxy-hemoglobin (CO-bHb), Deoxy hemoglobin (R-bHb), Oxy- hemoglobin (O2-bHb) and Met hemoglobin (Met-bHb) were generated following standard preparation methods described in the literature. Slopes of absorbance vs. pathlength were measured using SoloVPE system (Repligen Inc.) at 535, 560, 577 and 636nm. These values correspond to the maximum absorption wavelengths of major bovine hemoglobin derivatives Carboxy (535 nm), Deoxy (560 nm), Oxy (577nm) and Met-hemoglobin (636nm). The coefficients of extinction were obtained using the slope spectroscopy technique. The concentration of hemoglobin derivatives was calculated by utilizing an extinction coefficient matrix from the main fractions of purified bovine described above. The values obtained were compared to values that were measured in a standard clinical co-oximeter. Adjustments and optimization of the extinction coefficient matrix were based on multilinear regression values obtained by the co-oximeter and the SoloVPE.
To measure Met impurity in oxyhemoglobin preparations, samples of oxy hemoglobin were spiked with met hemoglobin and concentration measurements were generated to demonstrate linearity, range, precision and accuracy.

Results: Method specificity was demonstrated by analyzing blank buffer solution and sample solution. The slopes obtained for the blank buffer were less than 0.01, which is the baseline correction threshold for the SoloVPE. These results confirm that met hemoglobin is not present in buffer. The method was found to be specific.
Method precision was demonstrated by analyzing a sample in 6 replicates (Table1) of a sample containing a 2.5% excess Met spike (Cal-4, from accuracy study).
Method Linearity was evaluated by analyzing 7 standard solutions of calibrators by spiking Met hemoglobin in Oxy hemoglobin (Figure 1). The linear regression presented in Figure 1 illustrates the linear relationship of nominal spiked % Met with experimental values, the regression has a coefficient of determination = 0.9978.
Method accuracy was evaluated by assaying 3 calibrators generated in the 2.5, 3.5 and 4.5% Met. The calculated accuracy was calculated by dividing the percentage Met obtained by the method divide by the nominal met spike. Accuracy varies from 97.5% to 101.9%.
Method range for Met hemoglobin was established based in the precision, linearity and accuracy (Figure 1).
Efforts are currently being placed in determining QL and DL of the method.

Conclusion:
Slope spectroscopy with multicomponent analysis was successfully employed to measure the concentration of hemoglobin derivatives. In this work we present the feasibility to determine Met impurity in oxy hemoglobin preparations. The Met hemoglobin concentration in the example shown were around approximately 0.3 – 2.0 mg/mL in solutions at ~30mg/mL of total bovine hemoglobin.
This method is a lot simpler and cheaper than using a clinical co-oximetry device. An external calibration is not necessary and clean up does not require running cycles of proprietary buffers and standards. In addition, the SoloVPE allows for a wide range of concentrations. 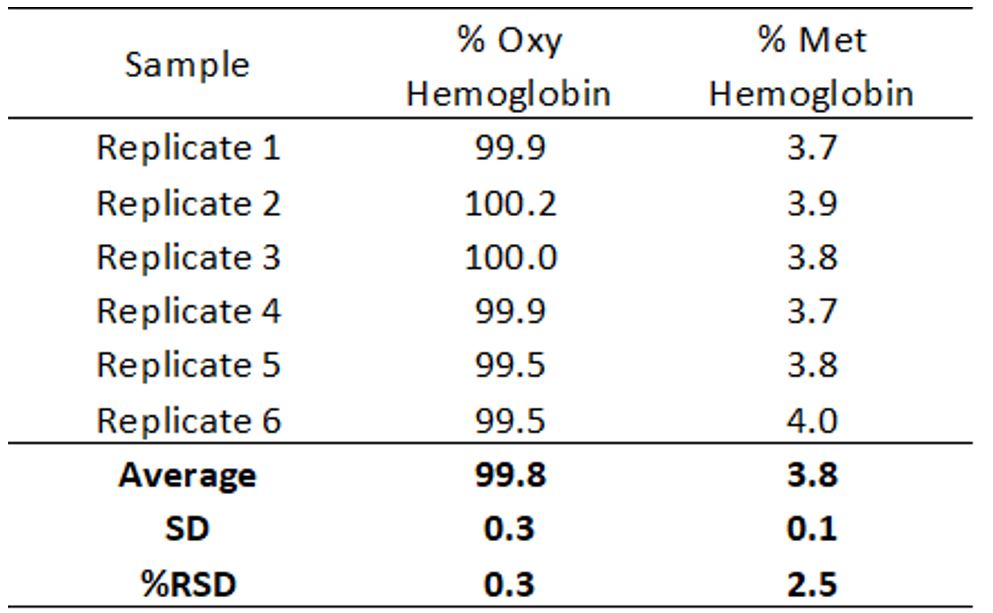