Purpose: Permeability plays a major role for oral biotherapeutic delivery and permeation enhancers can improve the intestinal permeability of poorly absorbed active pharmaceutical ingredients such as peptides and other biotherapeutics. While propyl gallate (PG) is widely used in food and cosmetics as an anti-oxidant, its bioanalysis has been rarely discussed as an excipient for oral delivery of biotherapeutics and very little has been published about PG bioanalysis and metabolism in the pharmaceutics field. Herein, we present a 10-plex, highly sensitive and robust LC-MS/MS method for the quantification of PG and its nine phase-I and phase-II metabolites in dog and human plasma.

Results: Quantitative measurement of PG and its nine metabolites in study samples was impacted by co-eluting matrix interferences. The interferences were ascribed to the administration of PG as they were not observed in samples from either the pre-dose or control/placebo groups.  Two other key challenges were chromatographic irreproducibility and insufficient sensitivity.  Optimization of the chromatographic method was performed to successfully resolve the aforementioned analytical challenges. A representative chromatogram of the 10 analytes is shown in Figure 1. Table 1 summarizes the LLOQ of each analyte. A method for the quantification of the seven phase II metabolites was qualified.  The chromatography was used in the validation of both human plasma and dog plasma methods for the quantification of PG and its two phase-I metabolites, gallic acid (GA) and 4-O-methyl gallic acid (4OMGA).  Method validation was conducted in accordance to the 2018 FDA Guidance [1]. Comprehensive evaluations of intra-/inter-assay accuracy and precision, specificity/selectivity, recovery, hemolysis and cross-analyte interference were performed to ensure method robustness.  The methods were employed to support clinical study NCT03362593 and preclinical dog studies to evaluate safety, pharmacokinetics and tolerability of PG as a novel oral formulation excipient.

Conclusion: Multiplexed, robust and sensitive LC-MS/MS methods were developed for the quantification of PG and its nine phase I&II metabolites in both dog and human plasma samples.  Several bioanalytical challenges were observed and successfully resolved.  The methods for the measurement of PG, GA, and 4OMGA in dog and human plasma were validated per 2018 FDA Guidance [1], while a method for the quantitation of seven phase-II metabolites of PG was qualified.  The bioanalytical methods have been utilized to support studies to evaluate the safety and pharmacokinetics of propyl gallate. 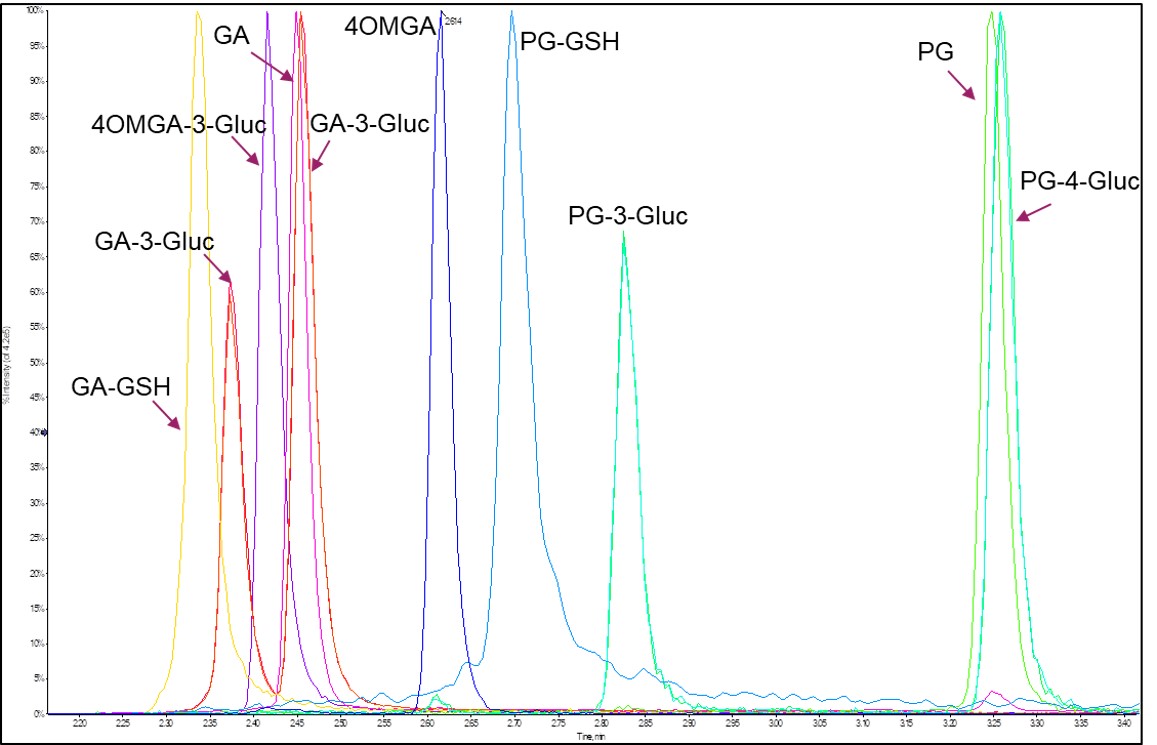