Purpose: Crystal engineering is an emerging tool for improving the physicochemical properties of drug candidates. The aim of the current investigation is to develop pharmaceutical cocrystals of hydrochlorothiazide (HCT) by a crystal engineering approach using hot-melt extrusion (HME) technology to improve solubility and permeability. The cocrystals produced via HME were compared with liquid-assisted grinding (LAG) cocrystals.

Methods: LAG cocrystals were developed by blending hydrochlorothiazide (HCT) and nicotinamide (NIC) in a 1:1 molar ratio with 100 μL of methanol in a motor and pestle for 20 min. Cocrystals prepared by LAG were evaluated by DSC and FTIR. Based on the thermal properties (DSC data) of LAG cocrystals, the physical blend of HCT and NIC in the 1:1 molar ratio was extruded in a co-rotating twin screw extruder (Process 11, Thermo Fisher Scientific, Waltham, Massachusetts, USA). Extrusion was performed at different barrel temperatures (150, 160, and 170°C) at 25 rpm screw speed. The extrudates were characterized by DSC and FTIR. The in vitro drug release studies were conducted for a sample equivalent to 50 mg of pure HCT in HCT-NIC co-crystal in 900 mL of DI water using a USP type II apparatus (SR8-plus, Hanson, Chatsworth, California, USA). The temperature of the dissolution media was maintained at 37 ± 0.5 °C with a paddle speed of 50 rpm. The samples were collected at predetermined time intervals and analyzed for drug content using UV spectrophotometry at an absorbance of 272 nm.

Results: From the DSC data (Fig. 1), HCT and NIC showed a sharp single melting endothermic peak at 272.8°C and 131.3°C, respectively, indicating their melting points and crystalline nature. The LAG sample showed a melting peak at 175.6°C indicating the formation of cocrystals. Cocrystals formed by LAG indicated the feasibility of co-crystallization with HCT and NIC. Extrudates obtained at 150°C showed two endothermic peaks in the thermograms. The peak at 124.4°C with low intensity may be due to the presence of unreacted nicotinamide in the extrudate. The other peak at 176.1°C is due to the melting of HCT-NIC cocrystals, which is in accordance with cocrystals prepared by LAG. A similar trend was observed in the case of extrudates obtained at 160°C with further reduced NIC peak intensity. The presence of two distinct endothermic peaks at 150°C & 160°C indicates incomplete co-crystallization. However, only a single endothermic melting peak of cocrystals was observed at an extrusion temperature of 170°C suggesting the complete conversion of the HCT-NIC blend into cocrystals. These findings conclude that the extrusion temperature played a significant role in production of high quality cocrystals. The FTIR spectra of HCT-NIC cocrystals showed variation compared to pure HCT and pure NIC (Fig. 2). The -NH stretching at 3360 cm-1 in HCT had red shift in the co-crystal (3376 cm-1). This red shift is due to the hydrogen bond formation between HCT and NIC within the cocrystals. In addition, cocrystal formation was confirmed by the hypsochromic shift from 1667 cm-1 (NIC) to 1657 cm-1 (HCT–NIC). This illustrates the interaction between the drug and co-former, thus leading to cocrystal formation. The cocrystal formulation demonstrated a relative improvement in dissolution compared to that of pure HCT. Further, in-vitro permeability studies will be conducted to assess the permeability of the developed cocrystals. 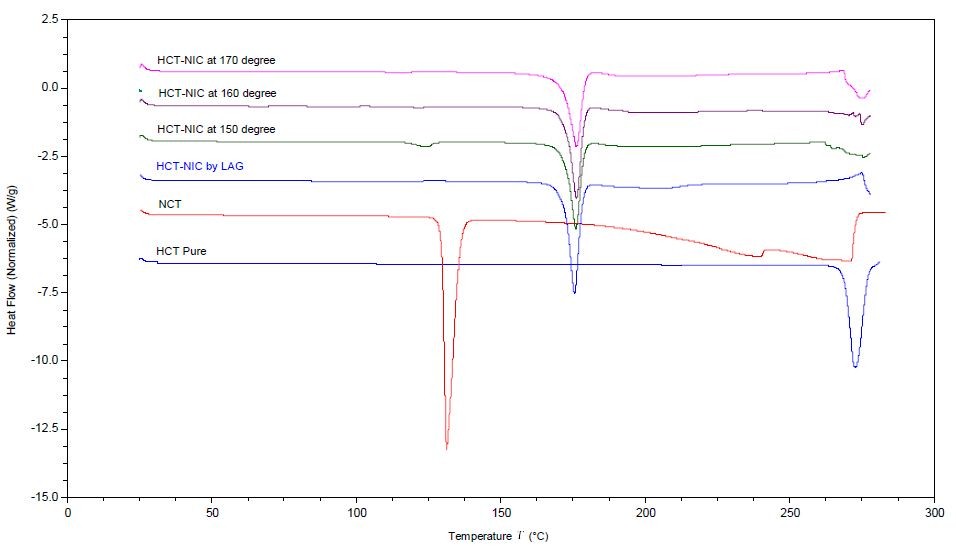 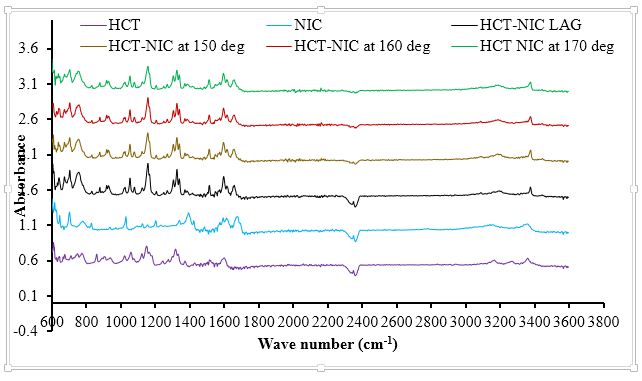