Method Validation for Quantitative Determination of the (Pseudo) Polymorphs Ratio in DS and DP Samples: Performance and Compliance

Purpose: Active Pharmaceutical Ingredients (API) often show the tendency to crystallize as solids in different structures (forms). This phenomenon is known as polymorphism or pseudo polymorphism in case of hydrates – solvates.
In general, different polymorphs show different physicochemical characteristics and properties. Therefore, the control of the API form in Drug Substance (DS) and Drug Product (DP) samples is more than critical because the API form itself has a great impact on the properties of the final DP: the form selection has ethical, therapeutic, commercial and economic implications.
X-Ray Powder Diffraction (XRPD) is an essential technique for the determination and quantification of polymorphic (or pseudo-polymorphic) forms in a given DS or DP sample in order to control the API phase purity, its potential conversion during manufacture and stability (not only in the early phase of the drug discovery process but also during the full development path, including batch release, formal stability and so on).
In this contribution the performed activities for the cGMP compliant validation of two XRPD methods to be used for the quantitative determination of the (pseudo) polymorph ratio in a UCB DS and DP (ie granules of a fixed composition) are presented.

Methods: Pure micronized API in its anhydrous (A) and n-Hydrate (H) forms plus the placebo matrix (to mime the final drug product compositions) were utilized to generate samples at known Anhydrous / n-Hydrate content (% w/w) via manual geometrical mixing procedure.
A method for the 15% w/w API drug load (DP method) has been validated. Regarding the method for the pure DS, due to impossibility to produce reliable mixtures of micronized APIs (severe electrostaticity issues), a small amount of placebo was used to overcome the mixing problems, resulting in the validation of a 95% w/w API drug load method (aka DS method, assuming a pretty good approximation of a pure DS one).
XRPD data were acquired in transmission geometry with tuned parameters and peculiar polymorph diffraction peaks were identified and integrated.
All the validation activities (Specificity, Linearity, LoD - Limit of Detection, LoQ - Limit of Quantification, Accuracy and Precision) have been performed in agreement with cGMP (current Good Manufacturing Practices), ICH Q2(R1) (International Conference on Harmonization of Technical Requirements for Registration of Pharmaceuticals for Human Use: Validation of Analytical Procedures) and were fully compliant with FDA CFR21 part 11 for data integrity (both raw data acquisition and manipulation).

Results: The methods have the aim to quantify the w/w ratio between the API in its Anhydrous form A and its n-Hydrate form H.
Good linearity of the methods have been obtained as shown in Figure 1 and 2 with r2 >0.99 (some outlier in the method linearity were identified and excluded with the usage of a robust and validated SAS based statistical analysis).
Method performances in terms of LoD and LoQ (calculated from the linearity parameters according to ICH Q2(R1)) are shown in Table 1, with very good values especially for the low LoD - LoQ for the DS (aka 95% DP) method.
Moreover the methods reliability (in terms of accuracy and precision) were identified to be in agreement with the acceptance criteria stated in the validation protocol.

Conclusion: The obtained methods showed good linearity and performances (in terms of LoD, LoQ, accuracy and precision), in agreement with the expectation stated in the validation protocol.
All the activities (Specificity, Linearity, LoD, LoQ, Accuracy and Precision) have been performed in agreement with cGMP and ICH Q2(R1) and were fully compliant with FDA CFR21 part 11 for data integrity (both raw data acquisition and manipulation).
This work ended up in fully validated and compliant analytical methods based on XRPD for quantitative determination of the (pseudo) polymorph ratio in DS and DP samples to be used in any phase of the DS and DP development, batch release, formal stability and regulatory filing. 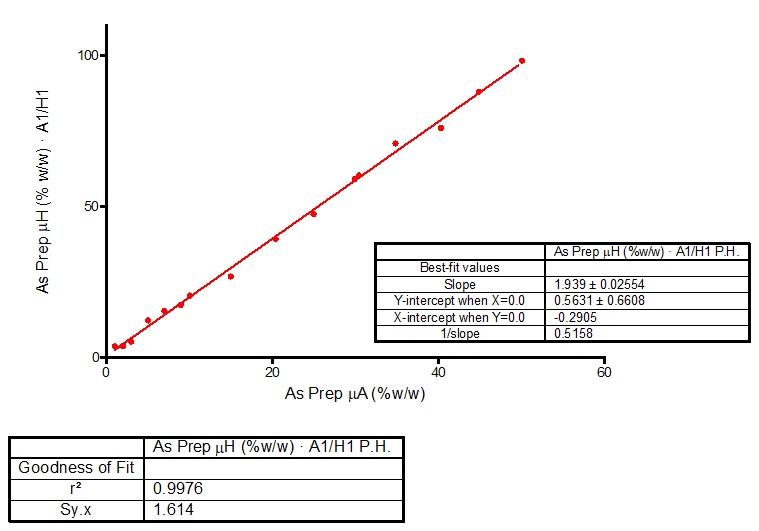 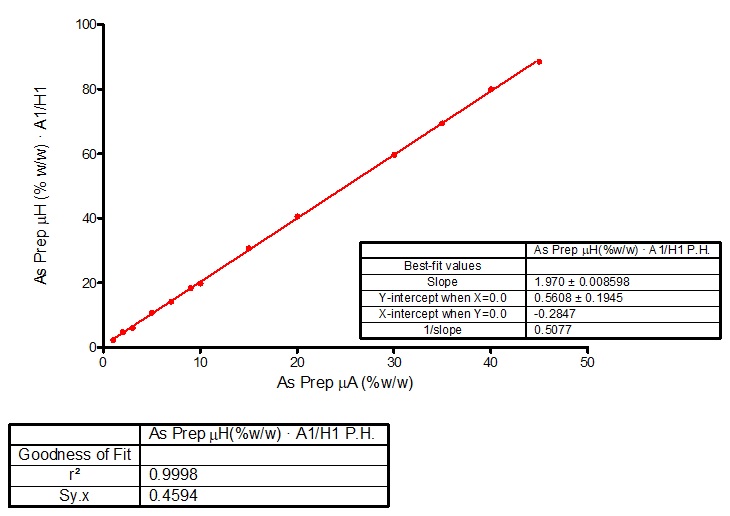