Multi PEGylation Can Increase the Potency In Vivo Despite Loss of Potency In Vitro: A Case Study of PEGylated G-CSF

Purpose: PEGylation is a proven technology to improve the pharmacokinetic profile of protein therapeutics that can be performed in variety of approaches such as: mono-PEGylation at N-terminal or cysteine site-specific and multi PEGylation with random attachments (1). Granulocyte colony stimulating factor (G-CSF) is approved for the treatment of neutropenia in patients undergoing chemotherapy with currently available marketed drug name as Filgrastim. PEGylation technology was deployed to improve its pharmacokinetic properties, that resulted in the extended acting version of G-CSF, Pegfilgrastim.  PP-103 was developed using a different PEGylation approach to obtain a novel multi-PEGylated G-CSF drug with improved pharmacokinetic and pharmacodynamic properties. Comprehensive biophysical characterization was performed to determine the PEGylation profile of the product. The average PEG number of PP-103 was observed to be in the range of 4-5. The biological activity of the product was studied both in vitro and in vivo.  PP-103 exhibited a lower potency compared to Pegfilgrastim when tested by an in vitro cell-based assay. Typically, in vitro assays are performed to identify a highly active most active versions lead candidate before in vivo testing. PP-103 was included despite a low in vitro value as a PEG# control. Surprisingly, PP-103 displayed significant potency in vivo as compared to Pegfilgrastim.  The results showed an inverse relationship of PEGylation on biological activity determined through concomitant in vitro and in vivo testing. Parallel In vivo pre-clinical testing may provide more accurate potency than in vitro alone specifically for complex, multi-PEGylated proteins.

Methods: PEGylation of G-CSF to produce PP-103 was performed by reaction of activated PEG with G-CSF protein in phosphate buffer with optimal pH and temperature conditions.
Cation-exchange (CIEX) chromatography using SP-STAT column (4.6 mm x 100 mm) in acetate buffer at pH 4.0 was performed to determine the identity of PP-103.
Size-exclusion chromatography coupled with multi-angle light scattering detector (SEC-MALS) method using YMC Diol column (7.8 mm x 300 mm) was used to determine the extent of PP-103 PEGylation. Astra software from Wyatt was used calculate the PEG number. Agilent bioanalyzer analysis was performed for corroboration of PEG# by SEC-MALS as well as heterogeneity for CIEX-HPLC method.
in vitro Potency of PP-103 was determined by the M-NFS-60 cell proliferation assay typically used for filgrastim products. M-NFS-60 cells were treated with indicated analytes for approximately 48 hours prior to measuring cell proliferation via change in optical density of a colorimetric reagent.
In vivo potency of PP-103 was conducted in male Sprague Dawley rats pretreated with cyclophosphamide (90 mg/kg) at least 24 hours to promote chemotherapy induced neutropenia.  Following, animals were treated with PP-103, Pegfilgrastim or formulation buffer (FB). Blood samples were collected at various time points for hematology testing. Individual rats were dosed with either 100 µg/kg of PP‑103, 100 µg/kg of Pegfilgrastim or FB. Absolute Neutrophil Counts (ANC) were determined at each time points and plotted as a function of time.

Results: Cation-exchange chromatography of PP-103 displayed multiple peaks based on charge separation showing the heterogeneity of the product that resulted from attachment of PEG at different sites and different ratios (Figure 1). SEC-MALS showed, the extent of PEGylation was calculated to be approximately 5 PEGs to protein based on the MW of PEG used in the manufacturing of the product (Figure 2a). Bioanalyzer profile of PP-103 displayed a pattern showing 4-6 PEGs in the attached to the protein (Figure 2b).
In vitro assay: Serial titration of both PP-103 and Pegfilgrastim was conducted to determine cell proliferation EC50. The EC50 value was 6.0 ng/mL for PP-103 and 0.009 ng/mL for Pegfilgrastim that showed a marked decrease in potency of the multi-PEGylated PP-103 product (Figure 3a).
In vivo assay: PP-103 and Pegfilgrastim (100 µg/kg) ANC values were determined by subtraction of FB  values. Both products displayed biphasic response curves.  PP-103 and Pegfilgrastim showed similar ANC trends in the first phase attributed to initial release of existing neutrophils from the bone marrow. In the second phase, PP-103 displayed significantly higher ANC values compared to Pegfilgrastim due to de novo synthesis of neutrophils (Figure 3b). These findings were further supported by CD34+  ex vivo maturation assays (data not shown).

Conclusion: PP-103 was manufactured and characterized using different analytical techniques. The heterogenous but reproducible profile arising from the manufacturing process was confirmed by cation-exchange and Bioanalyzer methods whereas the average PEG number was determined by SEC-MALS. The in-vitro assay indicated a loss of potency ( >600-fold) with multi-PEGylation. In contrast, the in vivo assay results showed an increased potency (4-fold) with multi-PEGylation. These findings prompted the selection of PP-103 for clinical development. Complex heterogeneous biologicals may present with unique activity profiles when compared to simpler mono-conjugated versions and earlier screening in animal models may be warranted to improve lead candidate selection. 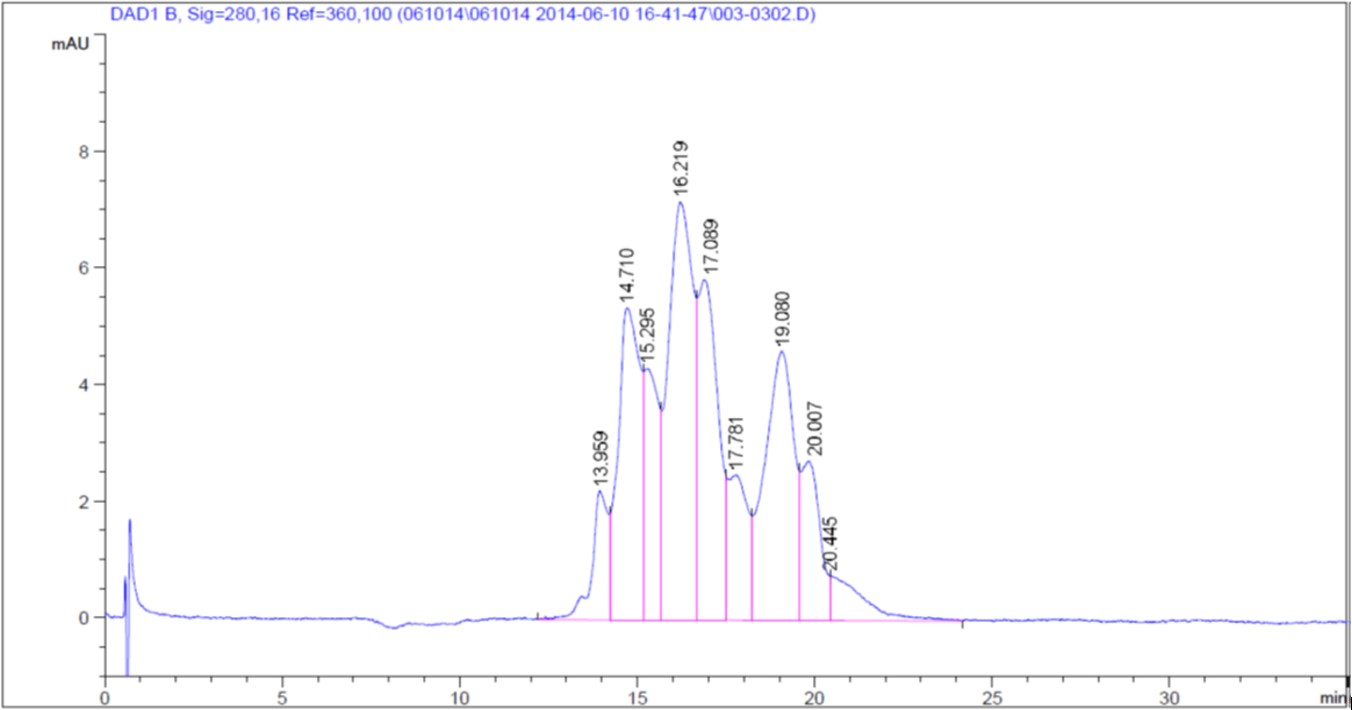