Purpose: Our research aim is to assess the performance of intranasal nano-formulations in vitro, particularly for CNS targeting delivery via the uppermost region within the nasal cavity. For the first time and in order to achieve, deep penetration into nasal cavity, this project is focussed on the delivery of nanoparticles via a liquified propellant contained within a pressurized metallic canister. The design of the nanocarriers in terms of their shape, size, surface charge and functionalization will be optimized to enhance the efficiency of carrier/drug in vitro deposition in the olfactory region. In addition, aerosol/device-related parameters as well as administration instructions (cast tilting and actuator tip orientation) will also be investigated for nasal regional localization.

Methods: Seed-mediated gold nanoflowers (AuNFs) was prepared following the protocol of (Ong et al., 2017) with slight modifications. Firstly, spherical Au seeds were synthesized: 100 mL of HAuCl4.3H2O aqueous solution was boiled for 2h and then the reducing agent sodium citrate dihydrate was added with continuous stirring to produce a rose wine type solution, referring to the citrate capped seed’s formation.
AuNFs were prepared in a 10 mL vial of ultra-pure water by adding specific amounts of the pre-prepared seeds followed by HAuCl4.3H2O, silver nitrate as a shape directing agent, methoxy-PEG thiol as stabilizing agent and dopamine as both a reducing agent and model therapeutic, followed by stirring for two hours. The resulting dark blue color solution reflected the successful growth of gold nanoparticles, which were concentrated by evaporation (F1) or freeze-drying (F2) to be further suspended within metallic canister (Figure 1) with a hydrofluoroalkane propellant and delivered via a bespoke nasal device. Upon actuation, the spray jet nozzle creates high velocity droplets for the transportation of the therapeutic particles into the nasal cavity.
Glass collection apparatus (Copley Scientific, UK; Figure 1) was used to test the integrity of the AuNFs formulations after filling within the cans. F1 and F2- filled canisters were tested with the following procedure:

The spray mist was collected on a mixed cellulose ester membrane located at the top of the tube to receive the fired shot. A piece of mica and carbon grid was stuck on the membrane for SEM and TEM analysis, respectively.

Results: Both gold nanosuspension F1 and F2 were characterized and compared before and after the filling and spraying by the metered dose device. Figure 2A illustrates the concentrated gold nanosuspension, which is dark blue in color. DLS measurements showed that both formulations had a size range of 132.6 ± 0.95 nm and 137.8 ± 0.7 nm and were highly monodisperse, with PDI of 0.003 to 0.017, and positively charged (Z.P 5.42 ± 0.24 mV). These results were further confirmed with TEM imaging (Figure 2B and C). Interestingly, no changes were observed in terms of the shape and the size of the prepared particles following the filling within the propellant system (Figure 2E and F). However, very few particles could be detected on the TEM grids, so SEM-EDX analysis of the upper membrane was carried out to investigate elemental gold within the receiver membrane. Figure 3 shows tiny fluorescent dots distributed throughout the membrane and belong to Au element.

Conclusion: Aerosolized AuNFs were successfully prepared as a pioneer nasal system for further brain targeting. Their simple preparation, flexible morphologies together with high stability within the propellent based devices make them excellent candidates for nose to brain drug delivery studies. 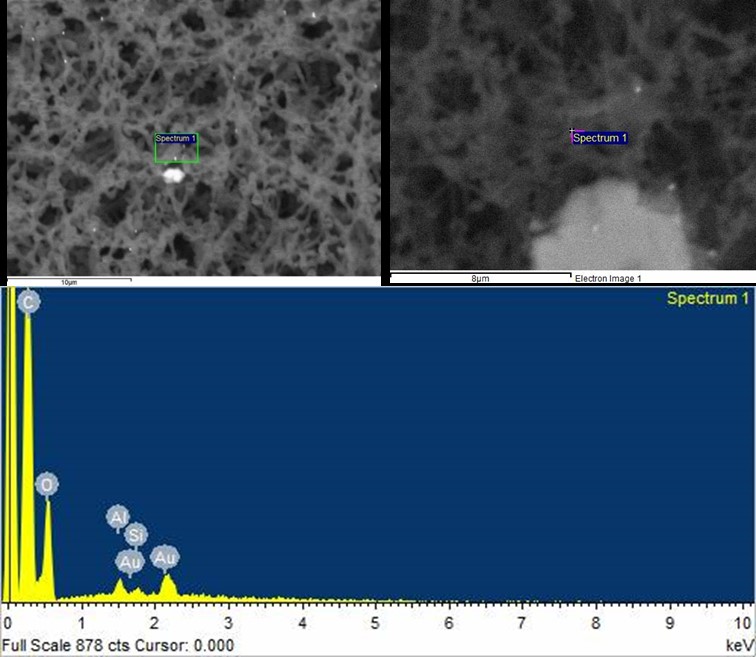 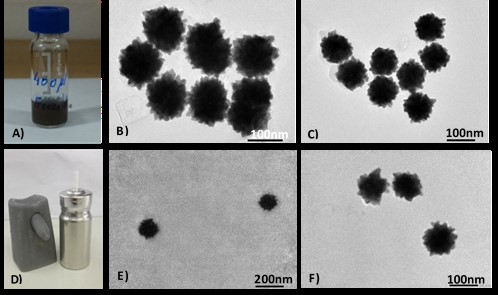