Purpose: This poster will focus on the method development part of nitrosamine impurity detection and quantitation using LC-HRAM method developed on Orbitrap ExplorisTM 120 (OE120). With OE120’s fast scanning speed and HRAM detection capability, we could resolve any potential isobaric interferences from the matrix without relying heavily on the chromatography. As a proof of concept, we present using HRAM method to mass separate NDMA from co-eluting DMF for reliable and accurate NDMA quantitation in ranitidine API extract.

Results: The current HRAM method is capable of quantifying 10 target nitrosamines in the extracted excipient matrix at 1ng/ml with high confidence, which is equivalent to 0.03 ppm in the drug substance and product. The LOQ is between 0.2 to 1ng/ml, and linearity up to 50ng/ml with coefficient of correlation all above 0.99. Reproducibility and accuracy of 5 replicate injections of check standard at 1ng/ml are well within 15% RSD and 15% difference respectively. Sample recovery was evaluated by comparing the peak area of the standards extracted from the excipient to the spiked excipient sample at 1, 2, and 5 ng/ml. The resultant recovery for all nitrosamines is between 90 to 115% with repeatability all within 15% RSD on 6 replicates at each concentration. NDMA were quantified in both ranitidine API and tablet extract at 30mg/ml, the amount detected in both cases were above 50ng/ml, which is outside the linear calibration range evaluated.

The current HRAM method operates in mixed targeted selective ion monitoring (tSIM) and targeted tandem mass (tMS2) mode with polarity switching. NDMA/NDEA/NMEA/NPIP/NPYR/NEIPA are analyzed in positive tMS2 mode, NDIPA/NDPA/NDBA are analyzed in positive tSIM mode, and NMBA is analyzed in negative tSIM mode for best sensitivity and selectivity. Even with 2 dalton extraction window in both tSIM and tMS2 mode, we did not observe any interferences in the excipient matrix. Orbitrap ExplorisTM 120 is capable of operating at 120K resolution with a cycle time around 3Hz, and 1.5Hz with polarity switching, we are able to obtain sufficient sampling points across the peak for accurate and reliable quantitation of all nitrosamines in excipient extract, and the resultant quantitation is unaffected when we perform the analysis at 120K versus 60K resolution.

One of the challenges in accurately assessing the NDMA concentration in drug product is the potential interference by co-eluting dimethylformamide (DMF) (reference 1). Not only that the precursor ion falls within the 2 dalton extraction window, the most predominant product ion at m/z of 46.0650, is exactly the same for NDMA. Moreover, DMF N15 isotope (m/z 75.0570) is only 25ppm apart from NDMA (m/z 75.0552); hence, the minimal resolution required to mass separate the two species is 40K. As a proof of principle, we are able to accurately detect about 1.5% of DMF co-eluting with NDMA in the ranitidine API extract using the Orbitrap ExplorisTM 120 at 60K resolution.

Conclusion: The results demonstrate that OE120 is capable of detecting and quantifying 10 target nitrosamines down to the minimal acceptable uptake level as imposed by the FDA and other regulatory agency guidelines. We also demonstrated that adequate mass resolution and tolerance are needed for reliable quantitation of NDMA in presence of co-eluting DMF in the ranitidine API extract. 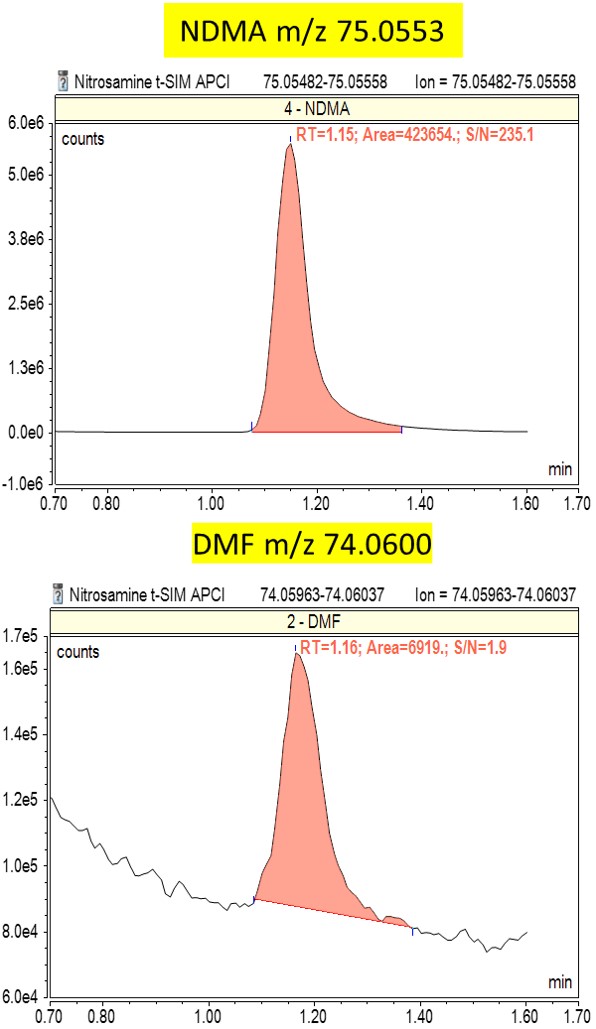 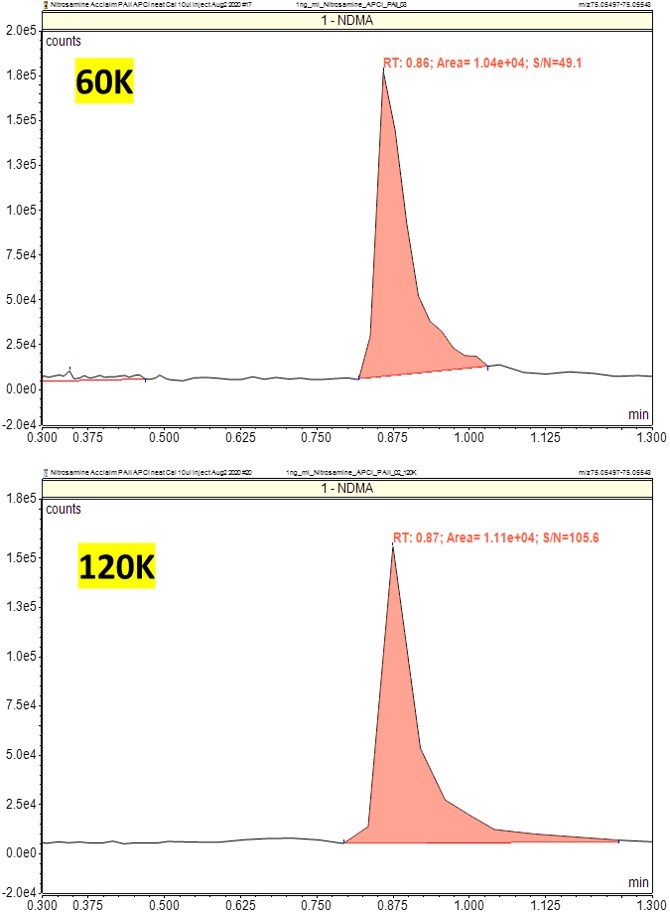 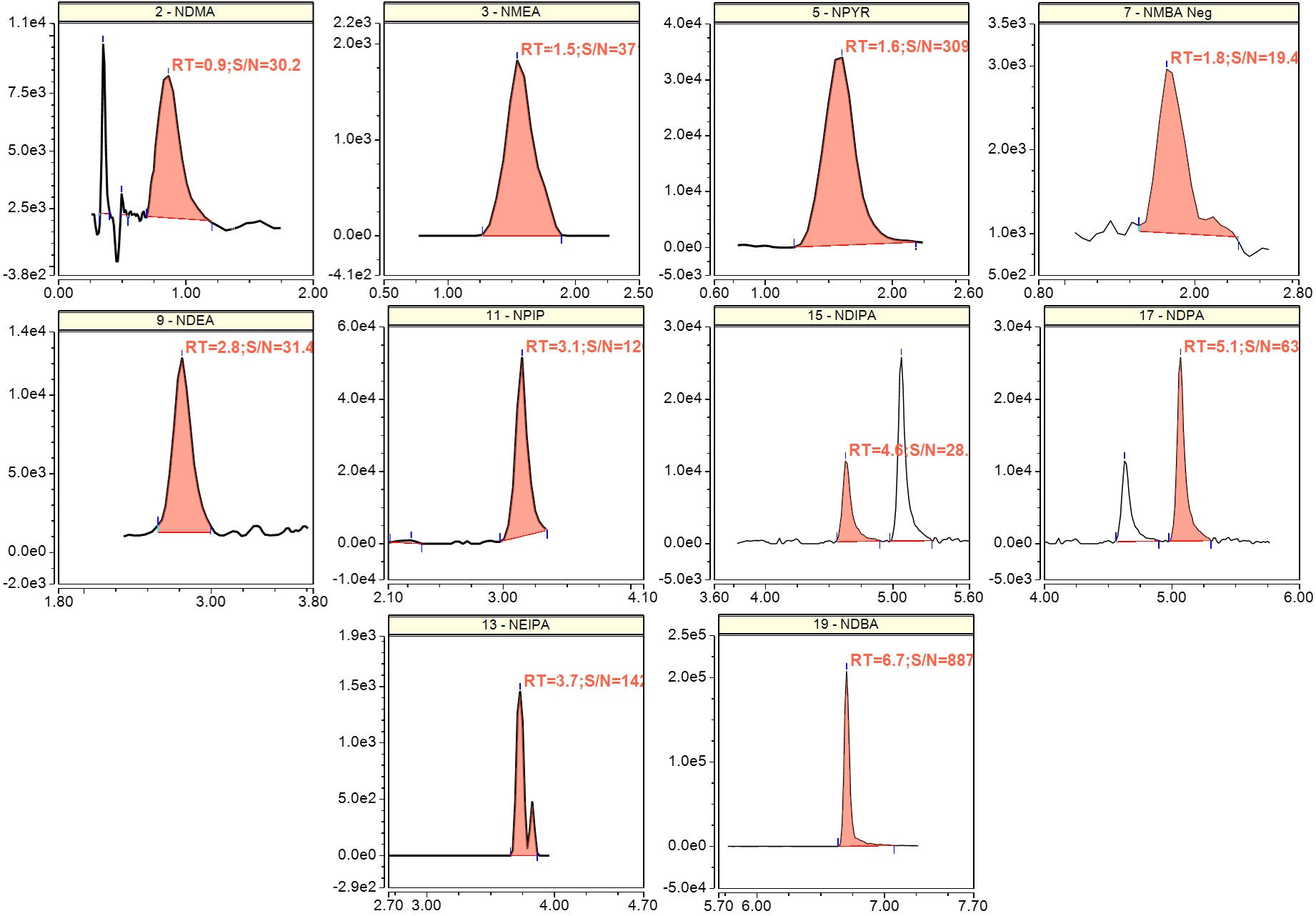