Purpose: Testing for alpha-defensin (AD) and human neutrophil elastase (HNE) biomarkers in synovial fluid is now a routine practice in a comprehensive pre- and intraoperative diagnostic workup of patients suspected of periprosthetic joint infection (PJI) of the knee and/or hip in accordance with Musculoskeletal Infection Society criteria1. Over 180,000 synovial fluid (SF) specimens have been processed at one clinical laboratory since the deployment of two qualitative ELISA-based laboratory developed tests in 2014 (AD) and 2015 (HNE). Each diluted sample is tested in two adjacent wells and their absorbance values are averaged, a standard practice in immunoassays to curtail assay variability. However, singlet testing of stringently validated and robust diagnostic tests is an entrenched long-standing practice in clinical diagnostics.
In this retrospective study, the analytical variability and agreement in clinical result between duplicate and singlet measurements in the AD and HNE diagnostic tests were evaluated to provide data-driven evidence to guide a decision onto whether to embrace singlet testing.

Methods: The dataset consisted of 240 microtiter plates (MTP) of each AD and HNE ELISA tests. Dates of collection of MTP data were randomly selected within each year between 2016 and 2019 and spanned several manufacturing lots. A full-MTP consisted of duplicates of 44 clinical samples, one calibrator, and QCs (QC1 negative, QC2 high negative, and QC3 positive). This encompassed 10,560 duplicate sets of clinical samples and 240 of each calibrator and QC level per ELISA test. For the purposes of this analysis, first and second wells of the replicate pair were designated as replicate 1 and 2, respectively. The analysis between duplicate and singlicate measurements included descriptive statistical methods of signal-to-cutoff (S/CO) values (absorbance of sample or QC divided by absorbance of the calibrator), percent positive and negative agreements, Bland-Altman plots, and Lin’s concordance correlation coefficient.

Conclusion: The above metrics suggest excellent agreement between singlet and duplicate analysis and support the adoption of singlet testing for the qualitative detection of AD and HNE in synovial fluid samples of patients suspected of PJI. 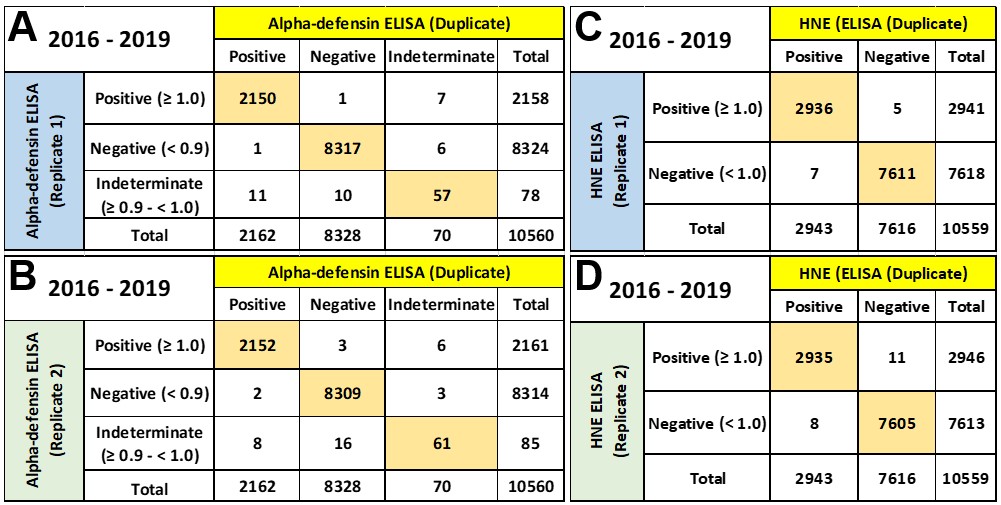 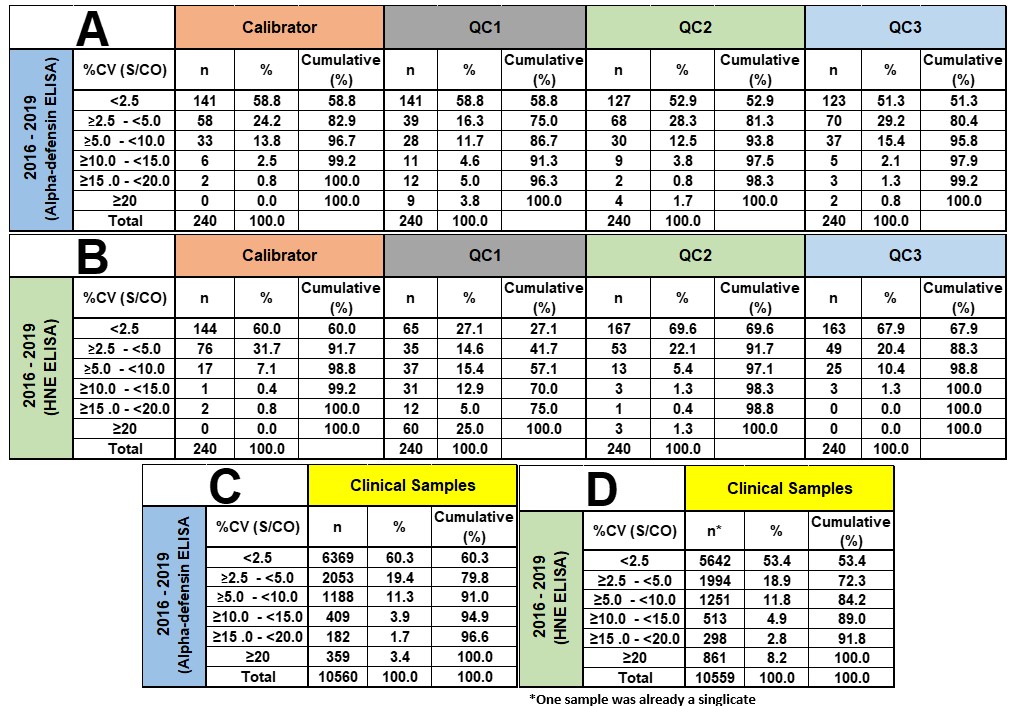