Purpose: As intraarticular (IA) injectables undergo rapid clearance from the joint into the surrounding blood and lymphatic vessels, the true duration of action of the drug is physiologically limited. Therefore, the effective joint residence time of a therapeutic agent represents one of the key challenges to overcome in drug formulation development.
IA injections are generally applied to pathologic joints, which involve an altered synovial permeability. The divergent clearance of an inflamed joint should therefore be considered when evaluating new formulations.
A porcine explant-based model was developed for permeability studies of differently sized potential drug candidates to gain new insights into their permeability behavior through both normal and inflamed synovial membranes.

Methods: A porcine synovial membrane served as the diffusion barrier within the transport experiments. Fluorescein-labeled dextrans (10, 20, 40, 70, 150 kDa) and fluorescein sodium (SM) were utilized as easily traceable markers. 0.2 ml analyte (2.5 mg/ml) was applied on the luminal side of the membrane. In a custom-built diffusion model, samples were drawn over 48 h at predetermined intervals from the basolateral chamber and quantified via fluorescence. All experiments were carried out using freshly excised synovial membrane with or without inflammation. Inflammation was induced by incubation with 10 µg/ml lipopolysaccharides (LPS) for 24 h. 150 kDa sized dextran was additionally tested with explants inflamed with ascending LPS concentrations from 1-20 µg/ml. Inflammatory response was evaluated by cytokine quantification, histopathology and tissue viability.

Results: Synovial diffusion was found to strongly depend on molecular size of the analyte. While fluorescein sodium (a small molecule) appears to freely cross the synovial membrane, the larger dextran transport rate is decelerated by steric exclusion. After LPS incubation, a distinct inflammatory response was observed. Inflammation was found to affect the tested solutes’ permeability in a size dependent manner. While fluorescein sodium showed no significant difference in transport rate, changes became significant with increasing molecular size of dextran. The transport rate of 150 kDa dextran approximately doubled in inflamed synovial membrane compared to a normal membrane, suggesting that biologicals with similar molecular size are expected to have less residence time inside a joint with synovitis. Additionally, severity of inflammation and consequent transport rate was observed to increase with use of ascending LPS concentrations.

Conclusion: The synovial membrane was shown to restrict diffusion of macromolecules by steric exclusion, which is believed to derive from the dense extracellular network and enmeshed proteoglycans. Ex-vivo induced synovitis appears to induce tissue barrier defects, leading to a reduced size selectivity of the synovial membrane. The explant model offers the possibility to investigate solute transport mechanisms with close resemblance to biological structure of the joint with an more isolated view on permeability, offering a promising tool for rational formulation development. 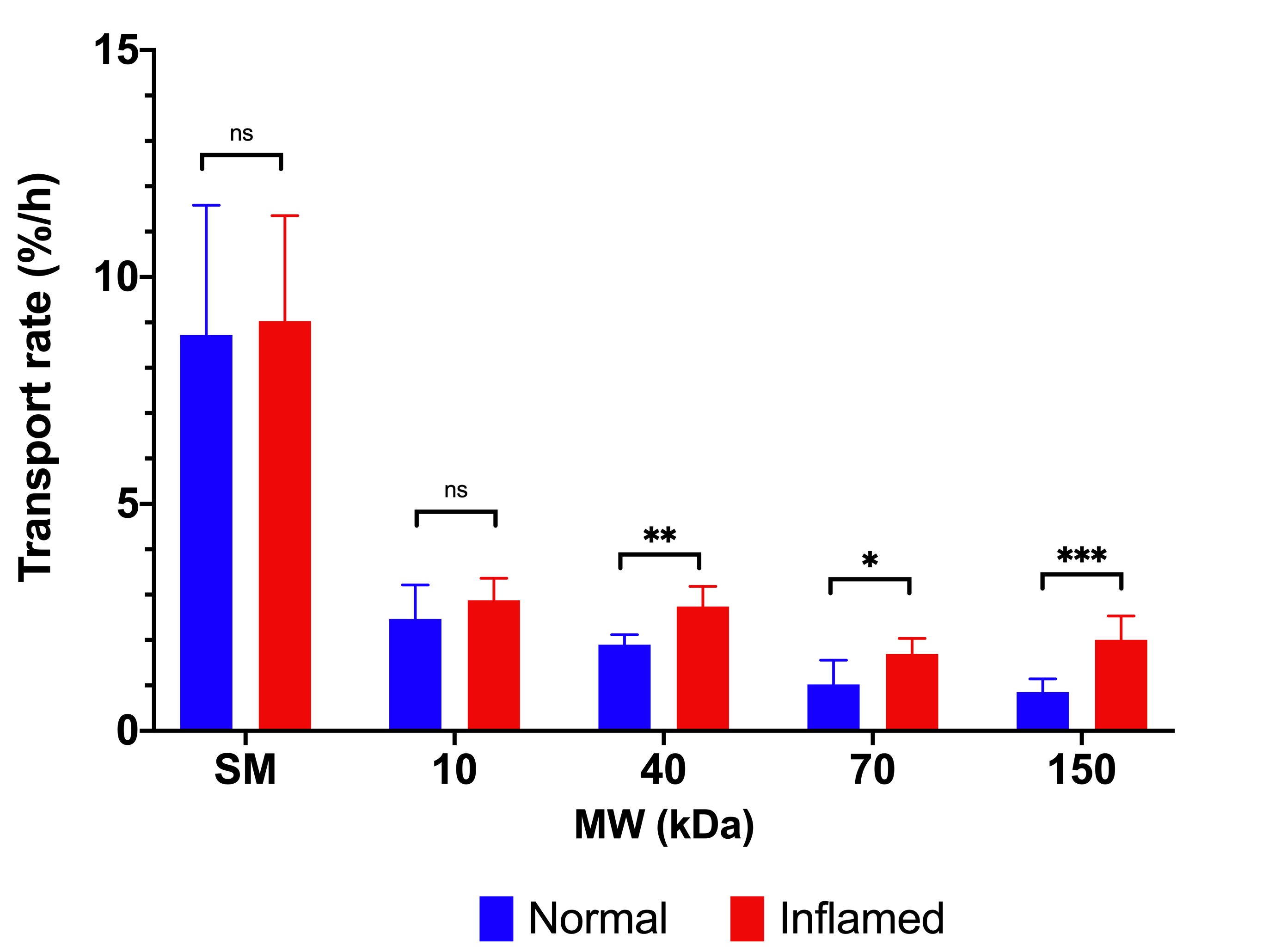 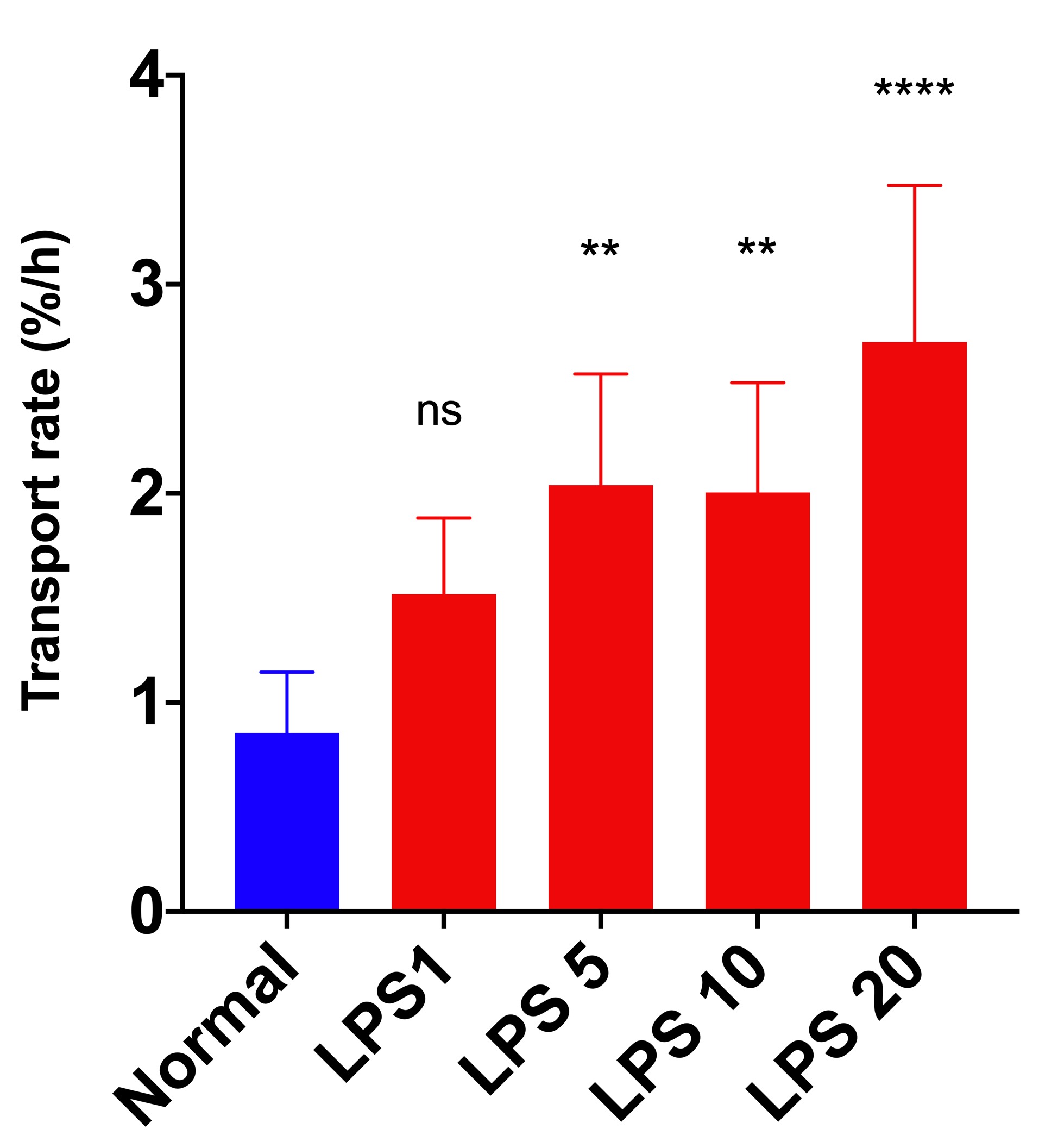