Purpose: In 2019-2020, ranitidine products were voluntarily recalled worldwide by pharmaceutical companies due to contamination by N-nitrosodimethylamine (NDMA), which is classified as a probable human carcinogen. Finding the origin of the impurity in the ranitidine products is important to mitigate risk and/or take regulatory measures. The intrinsically unstable nature and tertiary amine structure of ranitidine and early FDA reports on elevated NDMA levels following GC-based analysis suggested that the identified NDMA was a degradation product of ranitidine. It is of particular interest whether NDMA is formed during the storage of the active pharmaceutical ingredients (APIs) or solid formulations. We thus examined the effects of exposure to and storage at high temperatures of ranitidine tablets and reagent powder on the potential for NDMA formation.

Methods: The amount of NDMA in ranitidine tablets and reagent powders was measured using headspace GC/MS or LC-MS/MS. The GC/MS analysis was performed on a 7890B/5977B system equipped with 7697A headspace auto-sampler (Agilent Technology). The headspace oven temperature was operated isothermally within the range of 80°C–110°C for 10 min. For the LC-MS/MS analysis, LC separations were performed on a Nexera LC-40 UHPLC system (Shimadzu) with a Shimpack ARATA C18 column (3.0 × 75 mm, 2.2-µm particle size, 12-nm pore size). Mass spectrometric detection was performed on a Shimadzu LCMS8060 tandem mass spectrometer with an electrospray ionization source in the positive ion mode.
Ranitidine tablets in push-through packages and ranitidine reagent powders in glass vials with hermetic caps were stored in a storage chamber controlled at 40°C/75% RH or 50°C/75% RH for up to 8 weeks and then subjected to NDMA measurement. The effects of storage conditions (moisture and oxygen) on NDMA formation was also studied by storing ranitidine reagent powders in open, closed, or vacuum vials at 60°C/75% RH for 1 week.
The amount of nitrite in the samples was analyzed by ion chromatography using a Dionex Integrion HPIC System equipped with an IonPac AS19-4 µm anion exchange column and a UV detector (214 nm). The mobile phase was produced using an electrodialytic potassium hydroxide eluent generator.

Results: A rapid forced-degradation study of ranitidine at high temperatures was performed using headspace oven of the GC/MS system. Brief (10 min) heating of ranitidine at 80–110°C induced temperature-dependent formation of NDMA (Fig.1). The results indicated that the reported formation of NDMA occurring during the GC/MS analysis depended on the measurement conditions. In the subsequent experiments, we performed LC-MS/MS analysis to avoid heat treatment-induced sample decomposition during measurement.
Storage of different brands of ranitidine tablets under accelerated condition (40°C/75% RH) for up to 8 weeks substantially increased the amount of detectable NDMA (Tablet A; 0.19 to 116 ppm, Tablet B; from 2.89 to 18 ppm, Fig. 2). In addition, more NDMA was produced in ranitidine tablet A under storage conditions of 50°C/75% RH and exceeded 500 ppm after 8 weeks. The amount of NDMA formed exceeded the acceptable daily intake limit of 0.32 ppm in ranitidine, as defined by the ICH-M7 criteria, during the accelerated storage conditions. This clearly supports the risk of NDMA formation in ranitidine formulations is attributable to storage under ambient conditions.
In order to clarify the impact of factors affecting NDMA formation, ranitidine reagent powders were stored in open, closed, or vacuum-sealed vials at 60°C/75% RH for 1 week. Absence of air in the vials resulted in smaller amounts of newly formed NDMA detectable during storage conditions (Fig. 3). These data suggested that the formation of NDMA in ranitidine formulations was triggered by exposure to both atmosphere conditions (e.g., moisture and oxygen) and to high-temperature conditions. The variation in the rates of NDMA formation observed on storage of tablet A and B (Fig. 2) can be partially explained by their different coatings and/or packaging, which determined the exposure to moisture and oxygen. For example, both tablets were film-coated, but different excipients were used. Storage of ranitidine tablets and reagent powders at high temperatures also increased nitrite levels, which is considered to be one of the factors influencing NDMA formation.

Conclusion: Temperature-dependent formation of NDMA occurs during the storage of ranitidine powders and tablets. The formation of NDMA as a degradation product rather than as a result of contamination during the API manufacturing process indicates that there will be difficulty in controlling product quality. Clearly, further investigation of NDMA formation pathways and how these are influenced by various factors (e.g., temperature, atmosphere, excipients, nitrite ratio) is necessary to mitigate the safety risk of these products throughout their lifecycle. 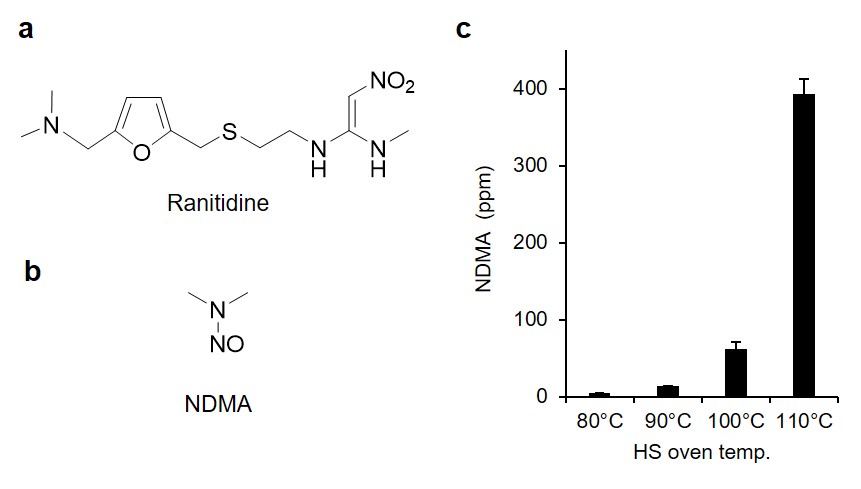 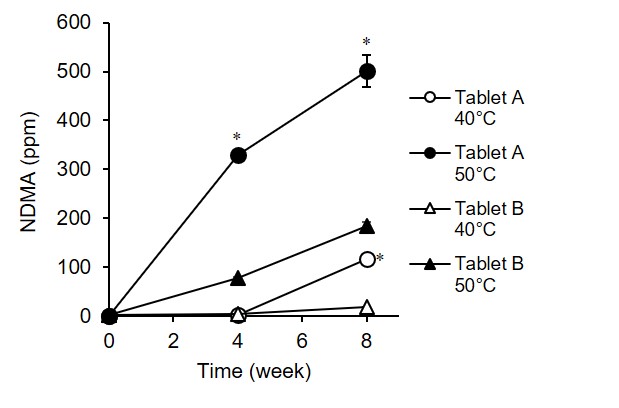 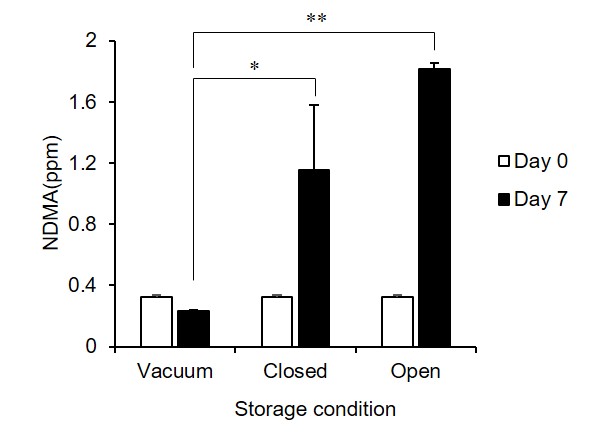