Purpose: In the manufacture of capsules external lubricants are applied after production to prevent capsules from sticking together and to facilitate processing in a capsule filling machine1. It was found that HPMC capsules are less deformable than gelatin capsules, but retain their elastic properties over a wider range of humidity2,3. HPMC capsules conditioned under particularly dry conditions, formed more regular openings and fewer fragments4. Other studies showed that the force required to deform HPMC capsules is significantly lower than for gelatin capsules. The stiffness of capsules was tested at different relative humidities (RH) and it turned out that gelatin capsules had higher values at lower RH, which only decreased again when RH was increased5. For both capsule types, HPMC and gelatin, the storage conditions and the moisture content showed a considerable influence on the stiffness of the capsules6. The question raises of how the subsequently applied external lubricants influence the puncturing properties and whether different salts or waxes could influence the mechanical properties of the capsules. It was attempted to understand the effect of external lubrication on the piercing behaviour of hard capsule shells, gelatin and HPMC, in relation to different working humidities in automated and manual puncturing mechanisms.

Methods: Hard capsules of gelatin (QG) and HPMC were provided by Qualicaps (Qualicaps Europe, Spain). All capsules were externally lubricated with magnesium stearate (MgSt), sodium lauryl sulfate (SLS) or carnauba wax (CW) after production. One capsule of each type was provided without lubricant (w/o). Capsules were stored in desiccators over saturated salt solutions (11%RH over lithium chloride, 22%RH over potassium acetate 51%RH over magnesium nitrate) for 7 days to gain equilibrium moisture state.
Two different ways to puncture capsules were tested. First, the capsules were punctured manually with a Plastiape RS01 device (n=3), which punctures the capsules with a needle at their domed ends and creates an opening on each side of the capsule. Second, an automated puncturing method was applied. The needle from the Plastiape RS01 was mounted on the force transmission arm of an Instron 5943 (Instron, US), which measured the forces while moving with 0.5mm/sec. The Instron punctured the dome of the capsule lid and recorded the used force (n=3).
Photographs of the openings were taken and the images were evaluated using ImageJ software.The sizes of the openings were compared to the diameter of the Plastiape RS01 needle and expressed as a percentage of the needle diameter (n=3).

Results: When the force of the Instron on the capsules increases, a slight deformation of the capsule occurs. At the maximum force load, force suddenly breaks off when the needle breaks through the capsule shell. At the same time a flap is formed and the friction between flap and needle is responsible for the force needed after the break through4.
Differences in  the piercing force of gelatin or HPMC capsules under the same storage conditions were observed and have been partially evaluated before4. However, the external lubricants applied in small quantities didn’t  show significant (p< 0.05) differences within one capsule material. Exception to this is HPMC w/o stored at 11% RH, which needed significant higher puncturing force (5N±0.54N) compared to SLS (4.01N±0.64N; p=0.016), CW (4.03N±0.44N; p=0.007) and MgSt (4.13N±0.51N; p=0.012). Although trends show that for both, gelatin capsules and HPMC, the required force decreases with higher humidity during storage, the results are only significant in a few cases.
Formation of opening was different for the automatic puncturing compared to the manual puncturing. During automated puncturing, gelatin capsules showed little difference in opening size regardless of conditioning and the use of external lubricants. A significant reduction of the opening size by the lubricants is visible in manual puncturing on gelatin. Gelatin w/o exhibited 20% higher opening areas compared to the lubricated capsules using Plastiape RS01. However, influence of humidity on the opening size of gelatin capsules was not very dominant for both devices.
During automated puncturing, HPMC capsules showed smaller openings on capsules w/o and SLS compared to CW and MgSt at all RH conditions and no visible trends could be observed with increased RH.
Using manual puncturing, there is a decrease in opening size going from 11%RH to 51%RH, which is the most dominant for capsules lubricated with SLS .
An optical examination of the capsules reveals that gelatin capsules have more circular openings under all conditions than HPMC capsules. The elasticity of HPMC capsules seems to increase to such an extent with increasing storage RH that the opening closes immediately after puncturing, especially for HPMC capsules with SLS7.

Conclusion: For gelatin capsules, the external lubricant layer on the capsule surface  influences the puncturing behaviour when using Plastiape RS01. This is not the case when capsules are punctured with Instron. HPMC capsules by contrast are affected by both lubrication and RH conditions. 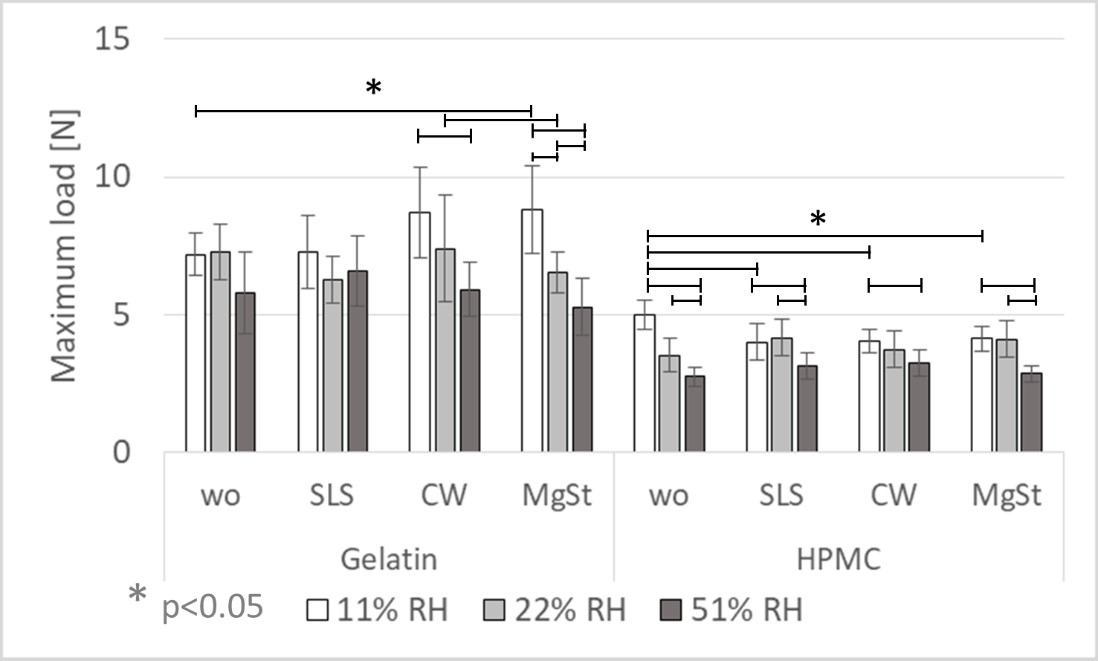 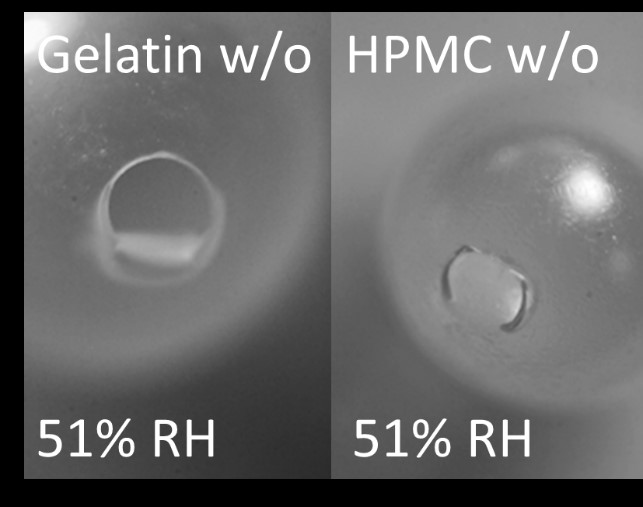 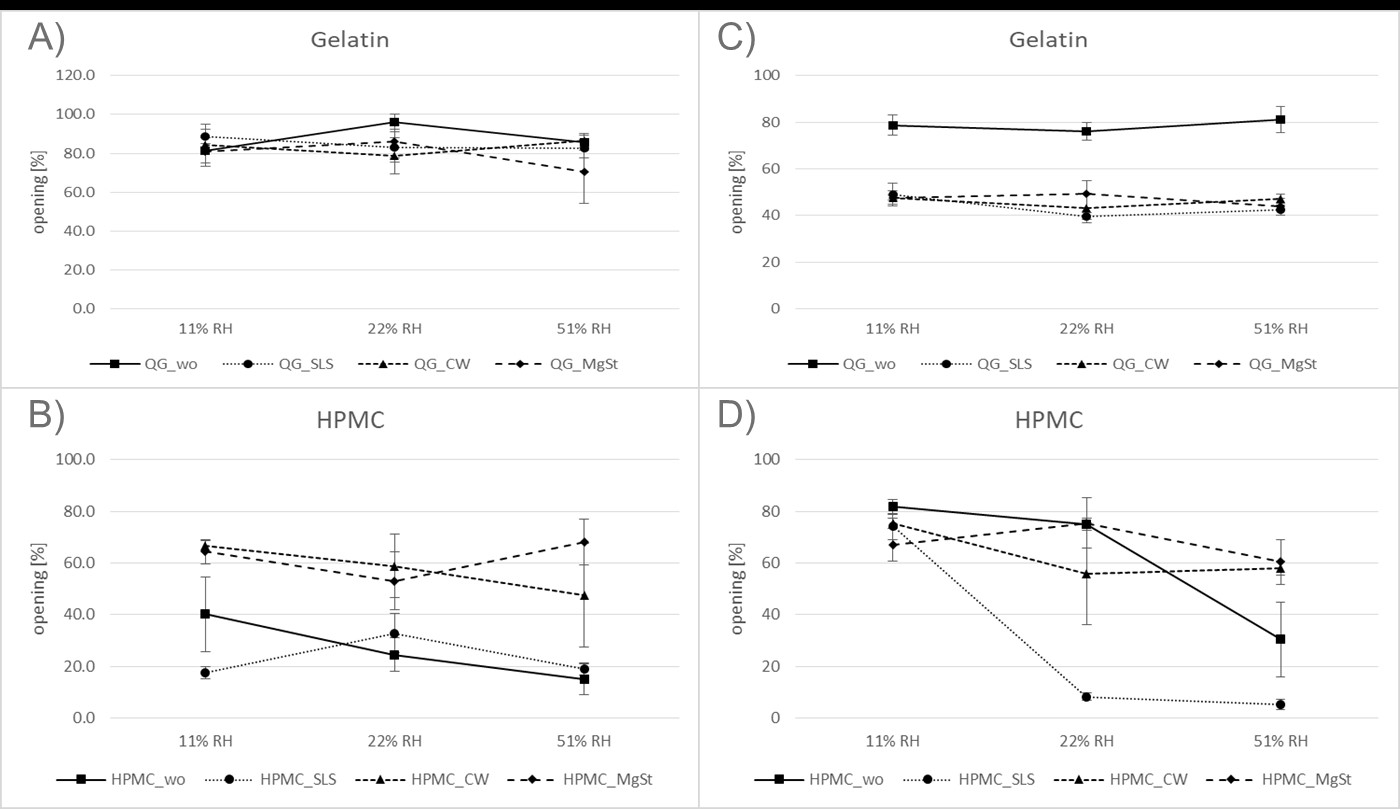