Purpose: Sepsis, a condition caused by severe infections, affects more than 30 million people worldwide every year and remains the leading cause of death in hospitals. Moreover, antimicrobial resistance has become an additional challenge in the treatment of sepsis, and thus, alternative therapeutic approaches are urgently needed. Traditionally, sepsis has been viewed as an uncontrollable inflammatory response to pathogens. However, recent clinical data reveal that more than 60% of septic patients survive through the initial inflammatory storm but rapidly progress to a longer immunosuppressive state, which is characterized by the paralysis and death of immune cells, leading to an inability to clear infections. Macrophages are one of the most efficient pathogen scavengers. Indeed, in septic patients, impaired macrophages seem to be primarily responsible for insufficient antimicrobial defense. Nevertheless, immunostimulatory agents for reversing deactivated macrophages did not significantly improve patient survival in clinical trials. This may be explained as follows. First, immunostimulatory agents can not completely restore the function of impaired macrophages. Second, invaded bacteria are usually trapped in macrophage phagolysosomes, where reactive oxygen/nitrogen species and lysozymes work synergistically to clear bacteria. However, many bacteria, such as S. aureus and E. coli, have evolved immune escape mechanisms for thwarting phagolysosomal killing. Third, although antibiotic therapy is the standard treatment in the sepsis clinical guideline, 70–80% of sepsis death is related to persistent infections, thus indicating the prevalence of antibiotic resistance and the paucity of effective antimicrobial agents. Based on these research findings, we hypothesized that the adoptive transfer of macrophages containing antimicrobial peptides linked to cathepsin B in the lysosomes (MACs) may enable the immunocompromised sepsis host to boost innate immunity, prevent bacterial immune evasion, and eliminate multi-drug resistant (MDR) bacteria.

Methods: To test our hypothesis (Fig. 1a), we first designed the AMP-CatB mRNA encoding an antimicrobial peptide IB367 (AMP-IB367), a cathepsin B (CatB), and a CatB-sensitive linker. AMP-IB367 is a broad-spectrum AMP with rapid bactericidal activity. CatB, an endogenous lysosomal protein, is first translated as an inactive precursor in the cytoplasm. After translocation into the lysosome, the precursor is processed into mature CatB. Here, the CatB is incorporated to transport the AMP-IB367 into lysosomes, where the linker is cleaved by CatB and thus the APM-IB367 is released. When phagosomes encapsulating bacteria fuse with lysosomes, the ingested bacteria are exposed to both pre-stored AMP-IB367 and lysosomal antimicrobial components. Although immune evasion strategies may protect MDR bacteria from phagolysosomal killing mechanisms, the AMP-IB367 is able to kill these bacteria. In order to equip macrophages with the AMP-CatB mRNA, we synthesized a series of vitamin-derived lipid nanomaterials (VLNPs, Fig. 1b). We found that the mRNA delivery efficiency of VCLNPs was 10-fold better than Lipofectamine 3000 and 50-fold better than electroporation in RAW264.7 macrophages (Fig. 2a). After optimizing the molar ratio of VC-Lipid:DOPE:Cholesterol and the mass ratio of VC-Lipid:mRNA, we identified the optimal VCLNPs formulation with improved mRNA delivery efficiency over 7-fold than its initial formulation. To test whether CatB was able to transport the payload into the lysosomes, we constructed enhanced green fluorescent protein (eGFP)-CatB mRNA and delivered it into RAW264.7 macrophages using VCLNPs. Confocal images exhibited that eGFP-CatB co-localized with LysoTracker in lysosomes, with a Pearson's correlation coefficient of 0.93 (Fig. 2b), indicating that CatB carried its payload into lysosomes. Because VCLNPs were also effective to deliver mRNA in bone-marrow-derived macrophages (BMDMs), we chose BMDMs for further antibacterial studies because of the clinical translatability.

Results: In vitro bactericidal results showed that MACs eliminated over 80% multi-drug resistant Staphylococcus aureus (MDRSA) or multi-drug resistant Escherichia coli (MDR E.coli) at 12 h. Next, we tested the therapeutic effects of MACs in MDRSA-induced sepsis mice with immunosuppression. MACs rescued 58% of mice from immunosuppressed sepsis compared with only 10% rescued by PBS-BMDMs. Because sepsis hosts are usually exposed to mixed bacterial infections, a formidable challenge for curing sepsis, we established a mouse sepsis model with infections by both MDRSA and MDR E.coli. Analysis of blood at 24 h showed that MACs were more effective in cleaning bacteria than PBS-BMDMs (Fig. 3a). Furthermore, survival rate of MACs (83%) was significantly higher than that of PBS-BMDM group (40%, Fig. 3b). After 30 days of post-treatment, all the mice treated by MACs showed undetectable levels of bacteria in their blood and major organs.

Conclusion: In summary, we have developed macrophages containing antimicrobial peptides linked to cathepsin B in the lysosomes (MACs) via VCLNPs-mediated delivery of mRNA. Our results prove the concept that adoptive transfer of MACs beneficially reduce bacterial burden and improve survival in MDR bacteria-induced sepsis mice with immunosuppression by restoring innate immune defense, preventing bacterial immune evasion, and eradicating infections. 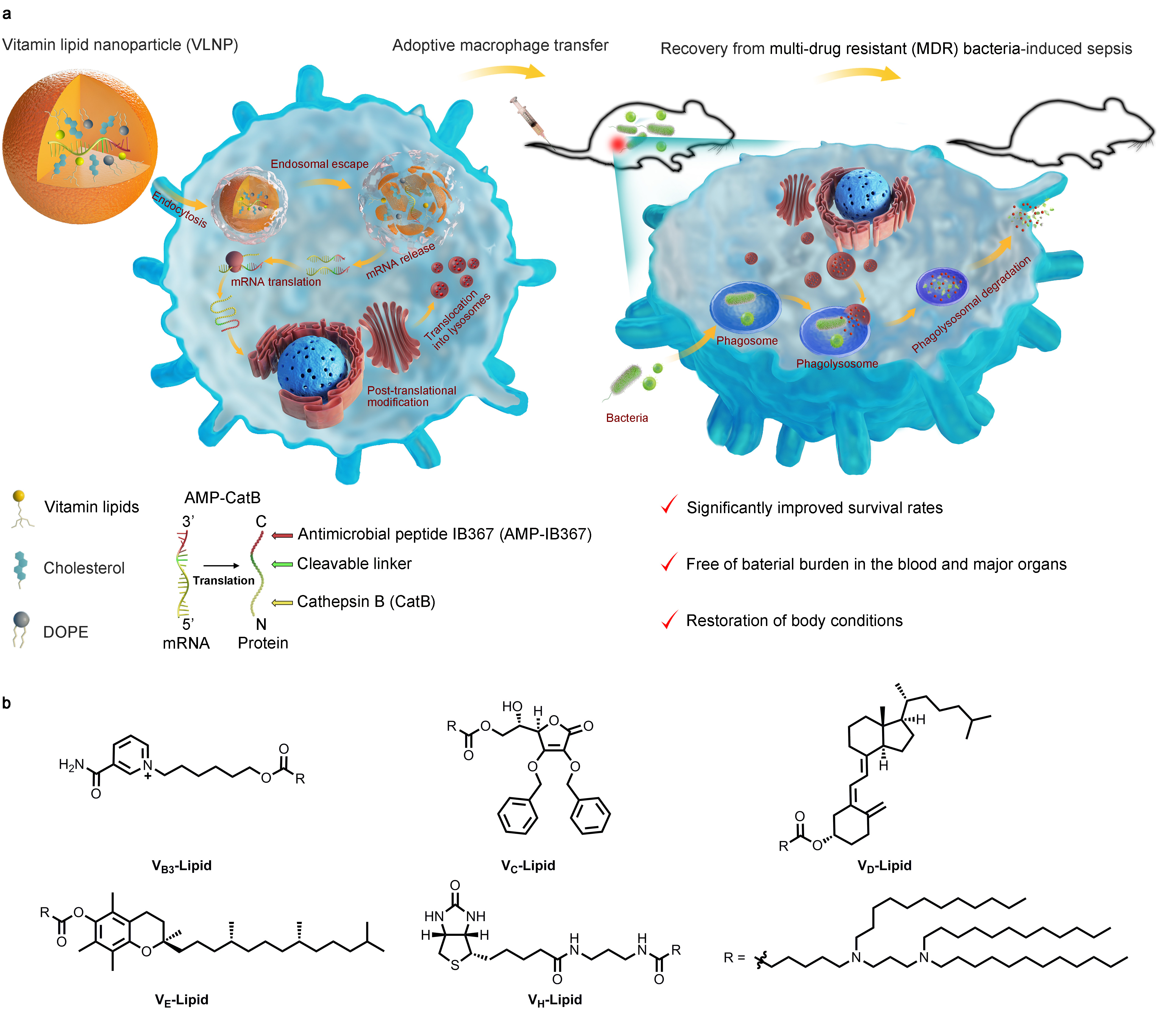 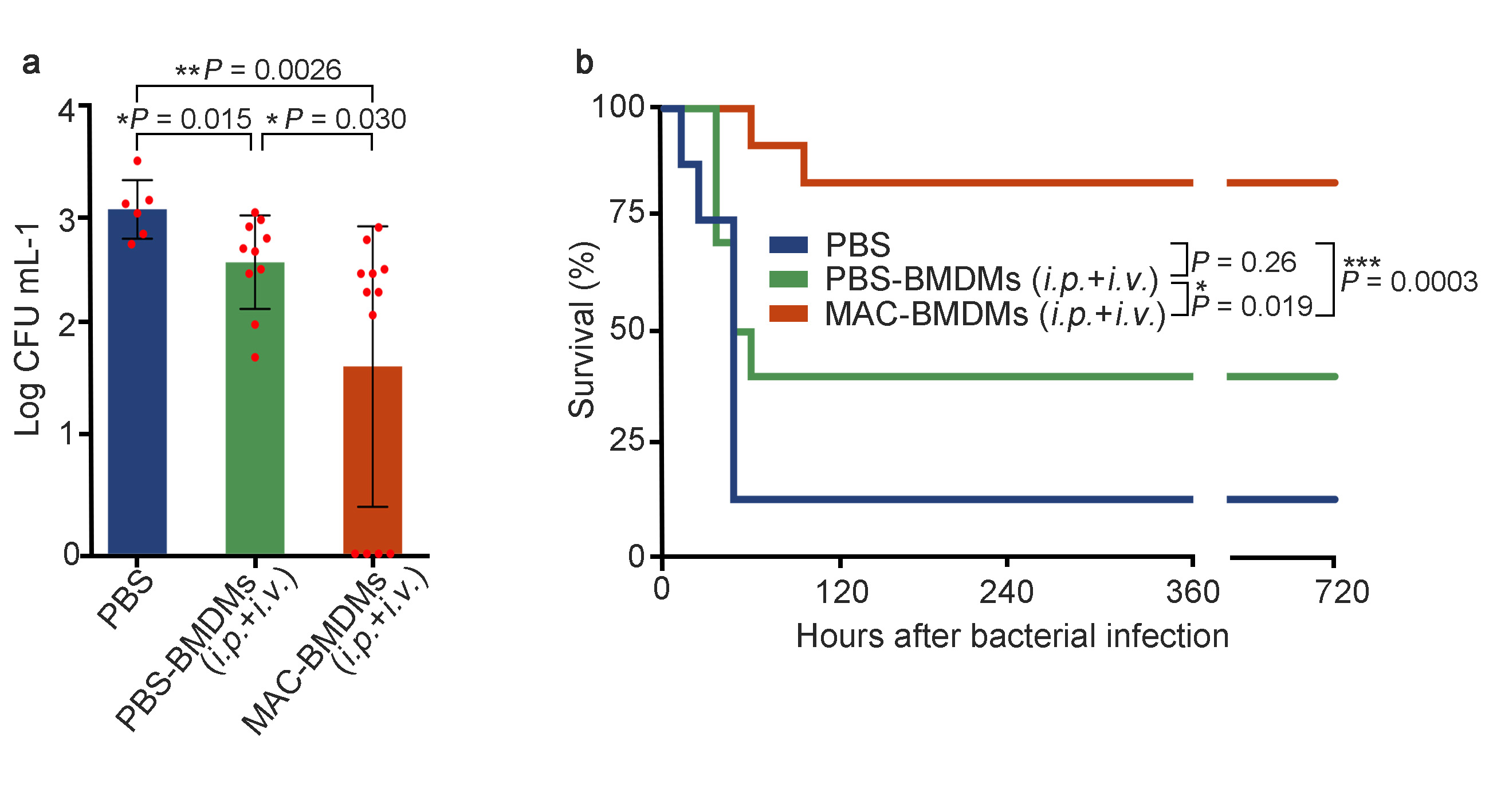