Purpose: Bioanalysis of larger protein-based therapeutics widely focuses on the enzymatic digestion of the protein and quantitation of surrogate peptides (bottom-up approach). This approach can lead to the misinterpretation of the actual concentration due to unknown biotransformation in biologic matrices and the introduction of artifacts during extensive sample preparation. The quantitation of large proteins such as monoclonal antibodies (mAb) at the intact level using accurate mass spectrometry (MS) can circumvent these risks. However, data analysis strategies for intact protein quant create additional challenges as the signal is distributed over a wider range of charges with increasing molecular weight. Quantitation of proteins based on reconstructed masses instead of extracted ion chromatograms of a given charge state offer a solution to overcome these challenges.

Methods: Rat plasma was processed using an immunoaffinity capture approach. NIST mAb was spiked into the processed rat plasma in different concentrations as an intact antibody analyte model. Samples were injected onto an analytical flow liquid chromatography (LC) setup equipped with a reversed-phase column. MS detection of the intact antibody was performed with electrospray ionization and quadrupole-time-of-flight (Q-TOF) technology. Data were processed in a compliant-ready way using vendor’s software including the reconstruction of masses.

Results: LC and MS settings were optimized. The analysis of the NIST mAb samples under denaturing conditions using reversed phase chromatography, resulted in a charge state envelope ranging from approximately m/z 2,000-4,000. Since the model antibody sample was not deglycosylated, several glycoforms were detected for each charge state.  For the mass reconstruction, the whole charge state envelopes were taken into account for all concentrations. The most abundant glycoform of the mAb (G0F/G1F) from the so-called zero charge state after reconstruction was used for determining the area being used for quantitation. The limit of detection of the intact sample in matrix was determined at 0.1 ug/mL. A linear dynamic range of three orders of magnitude was achieved for the workflow with tight accuracies within 85% and 115%. In addition, the intact quantitation workflow is meeting Good Laboratory Practice (GLP) and CFR part 11 criteria while being easy to use. 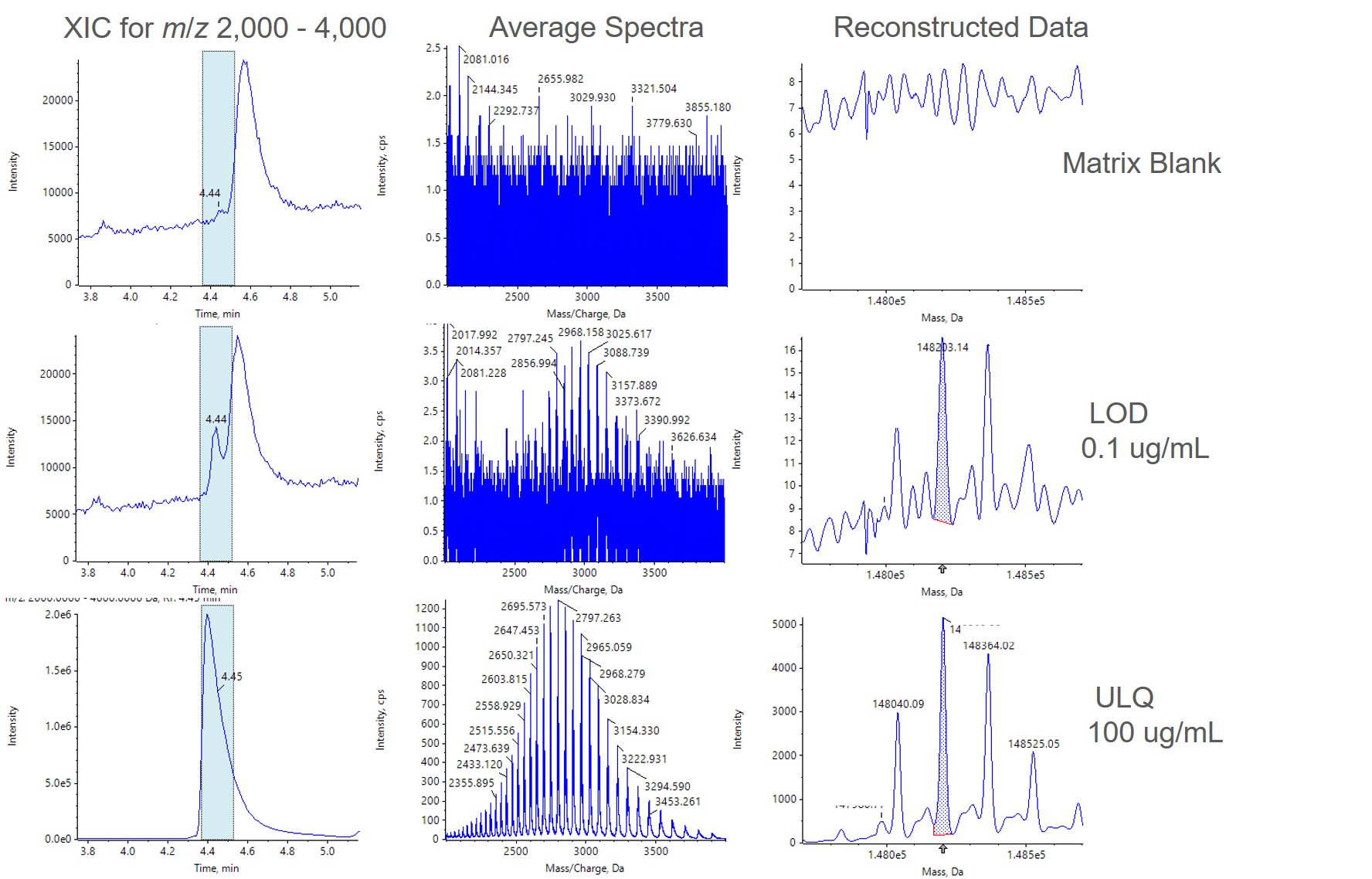