Correlation between Mucoadhesion and Surface Energy Properties of HPMC Compacts

Purpose: Mucoadhesion is defined as the adhesion between a polymer and mucous membrane in the presence of a biological fluid. The mechanism of mucoadhesion consists of two important stages: contact stage and consolidation stage. The mechanism of contact stage can be studied by the surface energy analysis from a thermodynamic point of view. Lewis acid-base approach from Van Oss et al. [1] can be used to interpret the principles related to the thermodynamic surface properties of solid. The progenitor of this approach was the division of surface free energy into Lifshiz-Van der Waals (LW) interaction (γLW) and acid-base (AB) interaction (γAB). The surface parameter of AB interaction is expressed by two terms: electron acceptor (γ+) and electron donor (γ-). For a surface of interest, these surface parameters (γLW, γ+ and γ-) can be quantified by contact angle measured with three specific liquids (one non-polar liquid and two polar liquids), and the free energy of adhesion (ΔG) in a ternary system can be further calculated. Hydroxypropyl methylcellulose (HPMC) was selected and directly compressed into polymer compacts.
The purpose of this study are: (1) to measure the force of mucoadhesion between mucous membrane and different viscosity grades of HPMC compacts; (2) to conduct the Lewis acid-base approach to reveal the mucoadhesion mechanism of HPMC compacts; and (3) to correlate experimentally determined force of mucoadhesion and the computed surface parameters using the Lewis acid-base approach.

Methods: Seven grades of varying viscosity (K3, E3, E5, E50, K4M, E4M and K15M) were prepared into compacts (10 mm in diameter) using a Carver Press by direct compression by applying a load of 5 metric tons, and pressing for 30 sec. The average weight of the compacts was 500 ± 5 mg.
Contact angles of the compacts were measured using goniometer by placing aliquots water, glycerol (GL) and diiodomethane (DIM) (~5μL) on the surface of polymer compacts. Surface energy parameters of LW and AB interactions of the polymer compacts were calculated based on contact angles of two polar liquids (water and GL) and one non-polar liquid (DIM). The  values of compacts were determined in a ternary system, which consists of mucin, polymer and corresponding mediums (gastric fluid, saline, and intestinal fluid) [2].
Force of mucoadhesion was measured by using CT-3 Texture Analyzer. The mucous membrane (porcine buccal, sublingual, stomach or intestine) was rinsed with simulated body fluid and put in contact with the compacts at the force of 1 g, contact time of 60 s and probe speed of 0.5 mm/s.

Results: The force of mucoadhesion measured on different types of mucosal surfaces showed an increase with the increasing viscosity of HPMC compacts (Fig.1). The oral region exhibited better mucoadhesive performance, while the intestinal region showed the lowest mucoadhesive force. This suggested the viscosity of HPMC have impacted its mucoadhesive performance.
The surface energy analysis (Fig.2), using LW component of free energy (ΔGLW) did not show considerable variation, while the AB component of free energy (ΔGAB) and the total free energy of adhesion (ΔGTOT), both exhibited a similar increasing trend, which indicated ΔGAB is a critical contributor to the overall ΔGTOT. The values of ΔGAB increased with the increasing viscosity of HPMC. Increasing ΔGAB indicated the potential of forming adhesive bonds attributed to AB interaction was decreasing. For HPMC, the fluctuation of AB interaction can only be contributed by the amount of hydroxyl groups. Therefore, it is reasonable to infer that the decreasing AB interaction with increasing viscosity of HPMC was due to the reducing amount of hydroxyl groups in HPMC.
As shown in Fig.3, a strong positive correlation was found between ΔGTOT and the force of mucoadhesion on various mucosal surfaces. Higher value of ΔGTOT commonly suggests lower potential of forming adhesive bond, in this case, a disagreement was found between the increasing and the increasing mucoadhesive force. Therefore, the calculated ΔGTOT might has some limitations of interpreting the mucoadhesive property of HPMC, and it seemed to be inappropriate to interpret the mucoadhesive performance only from the surface energy properties.

Conclusion: A positive correlation was found between the viscosity of HPMC and the force of mucoadhesion. Thermodynamic analysis of mucoadhesion was conducted on seven grades of HPMC compacts via Lewis acid-base approach for the purpose of predicting the driving force of mucoadhesion. Less amount of hydroxyl groups in higher viscosity grade of HPMC possibly resulted in the decreasing contribution of AB interaction to the ΔGTOT. Moreover, the calculated ΔGTOT showed a disagreement with the measured force of mucoadhesion, which implied the limitation of only using surface energy analysis to interpret the complex mucoadhesion process. 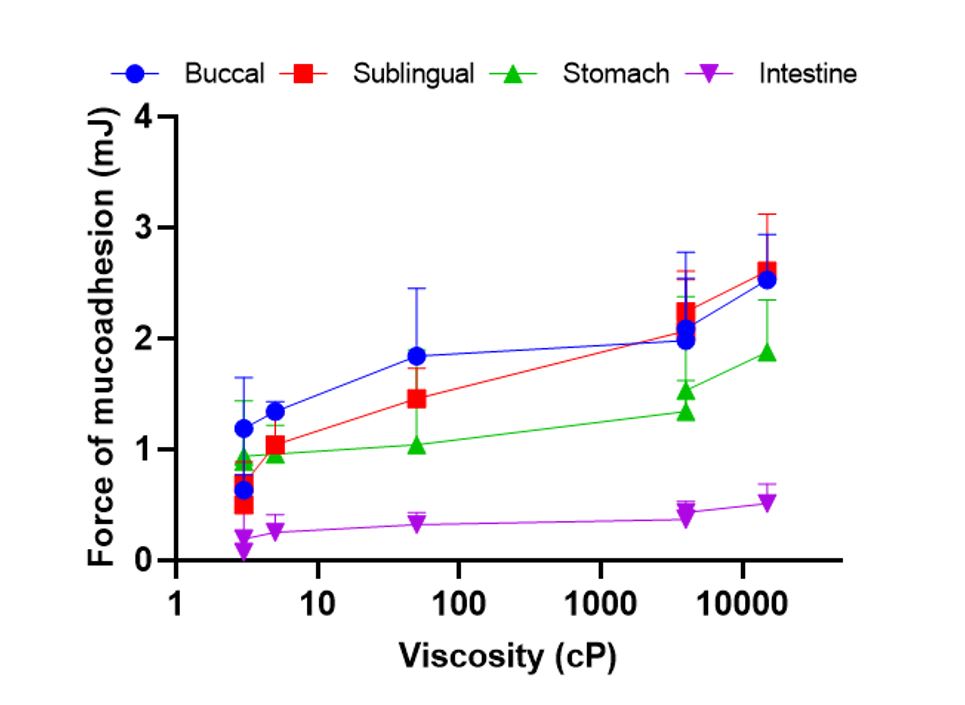 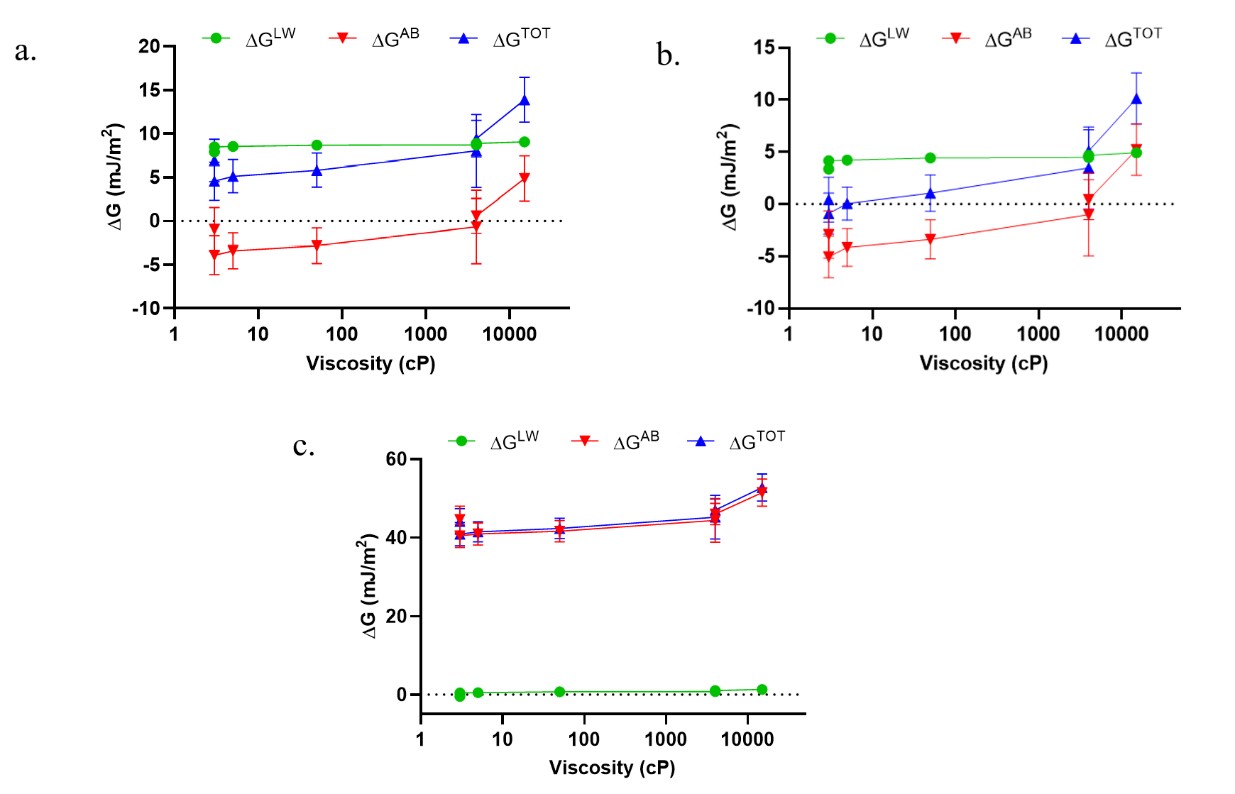 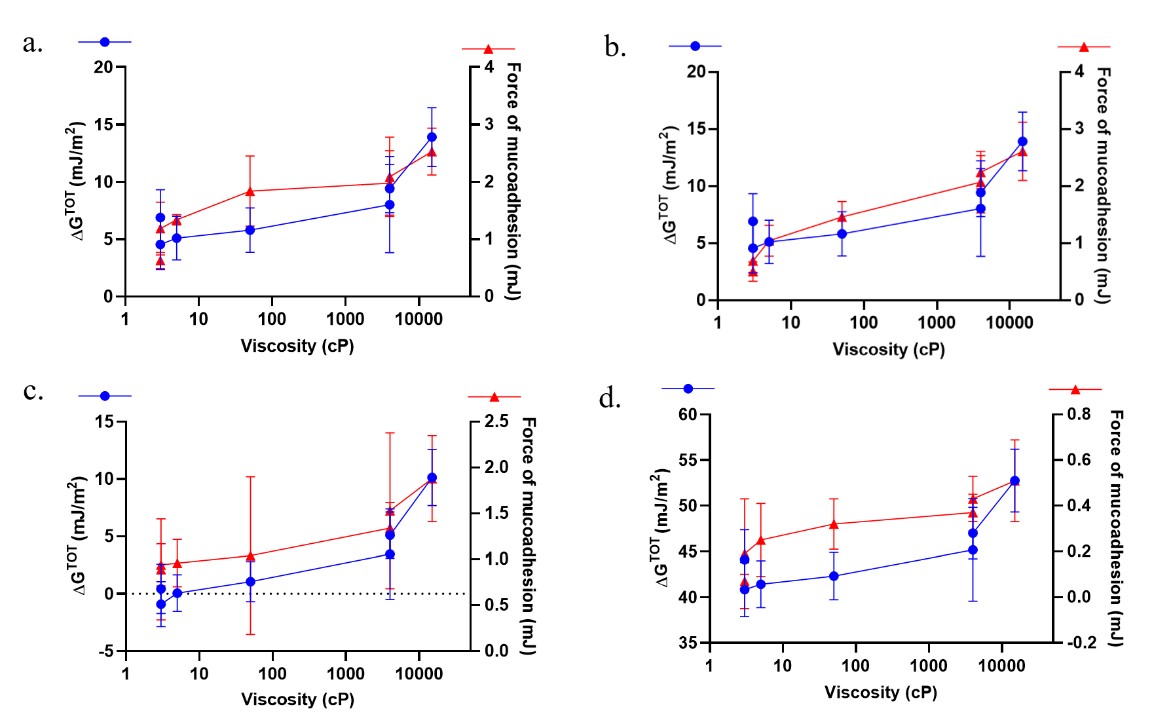