Purpose: The main aim of current research is to investigate the development of solid crystal suspensions (SCS) of carbamazepine (CBM) to improve dissolution by solvent free Hot-melt extrusion (HME) techniques. The hydrophilic crystalline carriers xylitol (XYL) and mannitol (MAN) were investigated to assess the formation of SCSs.

Methods: Thermal analysis was performed for CBM, XYL and MAN by Differential scanning calorimetry (DSC) (TA Instruments, New Castle, DE, USA), coupled with an RCS90 cooling device. The physical mixtures of CBM with varied drug loads (10% & 20%) and either of the carriers XYL or MAN were prepared by blending for 10 min at 20 rpm in V-blender (GlobePharma, MaxiblendTM). The extrusion process was performed using a counter-rotating mini extruder (Haake MiniLab II, Thermo Electron, USA) at a screw speed of 50 rpm and at a processing temperature of 96°C & 170°C for XYL and MAN, respectively. The collected extrudates were cooled at room temperature, milled, sieved and stored in a desiccator until further evaluations. All the prepared formulations (CBM-MAN and CBM-XYL) were characterized by DSC and FTIR. The in vitro dissolution study was performed for all the formulations and the pure drug in 900 ml 1% SLS dissolution media using USP type II apparatus (SR8-plus, Hanson, Chatsworth, California, USA). Aliquot of samples were collected at predetermined time intervals and the absorbance was recorded using UV-visible spectrophotometer (Genesys 180, Thermoscientific) at 288 nm.

Results: The thermal analysis data (Fig. 1) of CBM, MAN, and XYL showed a sharp, single endothermic peak at 193.25°C, 168.9°C and 97.51°C, respectively, indicating their melting point and crystalline nature. Based on the melting temperature of the carriers, extrusion of various formulations were performed above the carriers melting points. All the extrusion experiments were performed successfully with normal torque values. The extrudate material obtained was collected as a molten mass, which recrystallized into a solid immediately. In the case of CBM-MAN formulations (10% and 20%), a single melting endothermic peak was observed which is slightly lower than the melting endotherm of MAN. The absence of a drug melting peak can be attributed due to solubilization of CBM in the molten hydrophilic carrier. Similar results were observed for formulations of XYL containing 10% drug load. However, increasing the drug load to 20% resulted in a small melting endothermic peak of drug at 161.82°C. Depression in the melting endotherm of the drug can be attributed to poor solvating capacity of XYL. FTIR data revealed the presence of characteristic peaks indicating no interactions between the drug and carriers studied. These results suggest that the drug is in its crystalline nature in SCS formulations. However, the crystallinity of CBM in the solid crystal suspension will be confirmed using XRD analysis. Dissolution profiles of pure CBM and crystal suspensions are shown in Fig. 2. The MAN and XYL based formulations demonstrated relatively improved dissolution compared to that of pure CBM. The initial dissolution was high in SCS formulations of 10% CBM-MAN (63.2%) and 10 & 20% CBM-XYL (92.0% respectively) compared to pure CBM (41.8%).

Conclusion: CBM-MAN and CBM-XYL solid crystal suspensions were successfully prepared by hydrophilic carriers using HME. Studies revealed existence of formulations in crystalline form with no interactions. Furthermore, SCS was identified as a promising approach for enhancing solubility and dissolution of poorly soluble drugs. 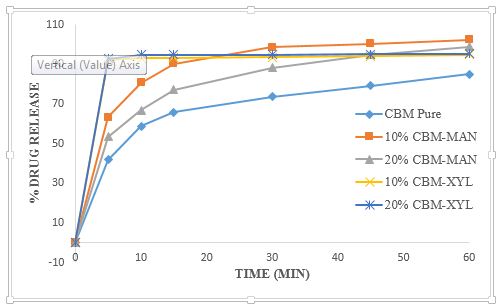 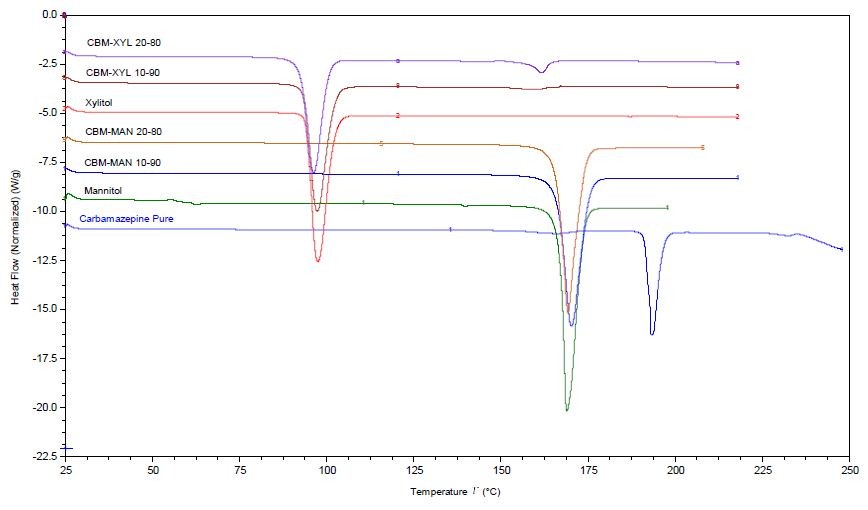