Purpose: Effective delivery of drugs into brain is a major limiting factor in the treatment of several neurological diseases including brain tumors, due to two major barrier sites: (1) blood-brain barrier (BBB) and (2) blood-cerebrospinal fluid barrier (BCSFB) comprising of the arachnoid barrier (AB) and choroid plexus (CP). Both BBB and BCSFB express ATP-bound cassette (ABC) drug efflux transporters which play an important role in regulating CSF concentration of their substrates. Primary among them is P-glycoprotein (PGP) that plays a significant role in therapeutic resistance of its xenobiotic substrates due to its expression and efflux function in target tissues/organs including the brain barrier sites. PGP is expressed in the basolateral membranes of BBB and AB to prevent blood-to-brain and blood-to-CSF drug movement respectively. We recently determined that there is a major species difference in PGP expression at the CP. Although we found abundant PGP expression at the apical membrane of five individual human CP samples, mouse CP epithelial cells completely lacked Pgp expression. This species difference in PGP expression is important because (1) mice are the most frequently used species to elucidate the role of transporters in estimating brain drug penetration, (2) CSF is frequently used as a surrogate for estimating drug penetration into brain/interstitial fluid, and (3) using mice as models to determine blood-to-CSF penetration of PGP substrates and their anti-tumor efficacy against tumors in contact with CSF such as choroid plexus carcinoma, myxopapillary ependymoma and leptomeningeal metastasis would presumably underestimate human CSF and tumor exposure of systemically administered PGP substrates. In our current study, we developed and characterized a transgenic knock-in mouse model expressing mouse Pgp exclusively at the CP apical membrane.

Methods: The 6.267kb mouse transthyretin (mTTR) promoter, a gene specifically expressed in CP, but not AB or BBB, of brain, was cloned upstream of a mouse Pgp-EGFP sequence in pCDNA3.1 vector. The Mlu1/Kas1 digested linearized sequence (mTTR-Pgp-EGFP) was injected into the pronucleus of a fertilized FVB mouse egg to create a transgenic mouse that expressed Pgp at the CP (CP-Pgp-EGFP transgenic (TG) mice).

Results: Fluorescent in situ hybridization (FISH) analysis revealed that the transgene hemizygously inserted at chromosome 18C-E1 of the mouse genome. Whole genome sequencing (30X coverage) revealed six copies of the transgene inserted in the reverse orientation at chr18:56102845 of the mouse genome. In situ hybridization revealed that the TG mice, but not wild-type (WT) mice, expressed Egfp and Abcb1a mRNA in the CP. Immunohistochemical analysis further confirmed that, while absent in WT mice, the EGFP protein was specifically expressed in TG mice only in the apical membrane of CP epithelial cells, but not in other brain barrier sites (AB or BBB). Endogenous Pgp protein expression was absent in CP, but present in AB and BBB of WT mice. However, Pgp was found to be expressed in all three barrier sites (CP, AB and BBB) of the TG mice. Importantly, the CP Pgp in TG mice was uniformly expressed in all ventricles of brain and across different ages (6 to 37 weeks), with higher expression in homozygous than heterozygous mice. Interestingly, Pgp expression in CP of the TG mice was found to be greater in male compared to female mice. No differences in endogenous Pgp expression between WT and TG mice was observed in peripheral organs such as liver and kidney. The functionality of Pgp in the CP of TG mice was verified using its ability to efflux Rhodamine 800 (Rho800), a fluorescent PGP substrate. Thirty minutes after intravenous administration of Rho800 (0.8 mg/kg) to mice, Rho800 fluorescence was found to be lower in the excised CP tissues of TG mice, compared to WT mice. In addition, ex vivo incubation of CP tissues from TG mice with 5 µM Rho800 for 30 mins exhibited decreased Rho800 fluorescence, compared to those from WT mice, which was reversed by pre-treatment of the CP tissues with 5 µM Cyclosporine A (a Pgp inhibitor) in the TG, but not WT mice. These results indicate that, in WT mice, lack of Pgp expression in CP epithelial cells leads to accumulation of its Pgp substrate, Rho800 in CP tissue. However, reduced accumulation of Rho800 in CP of TG mice suggests a possible efflux function of the expressed Pgp transporter at CP.

Conclusion: Overall, our findings demonstrate the development and characterization of a unique transgenic knock-in model expressing Pgp at the mouse CP. This model can be used to better predict blood-to-CSF penetration of PGP substrates in humans and may facilitate more effective delivery of PGP substrate chemotherapies used to treat certain CNS tumors. 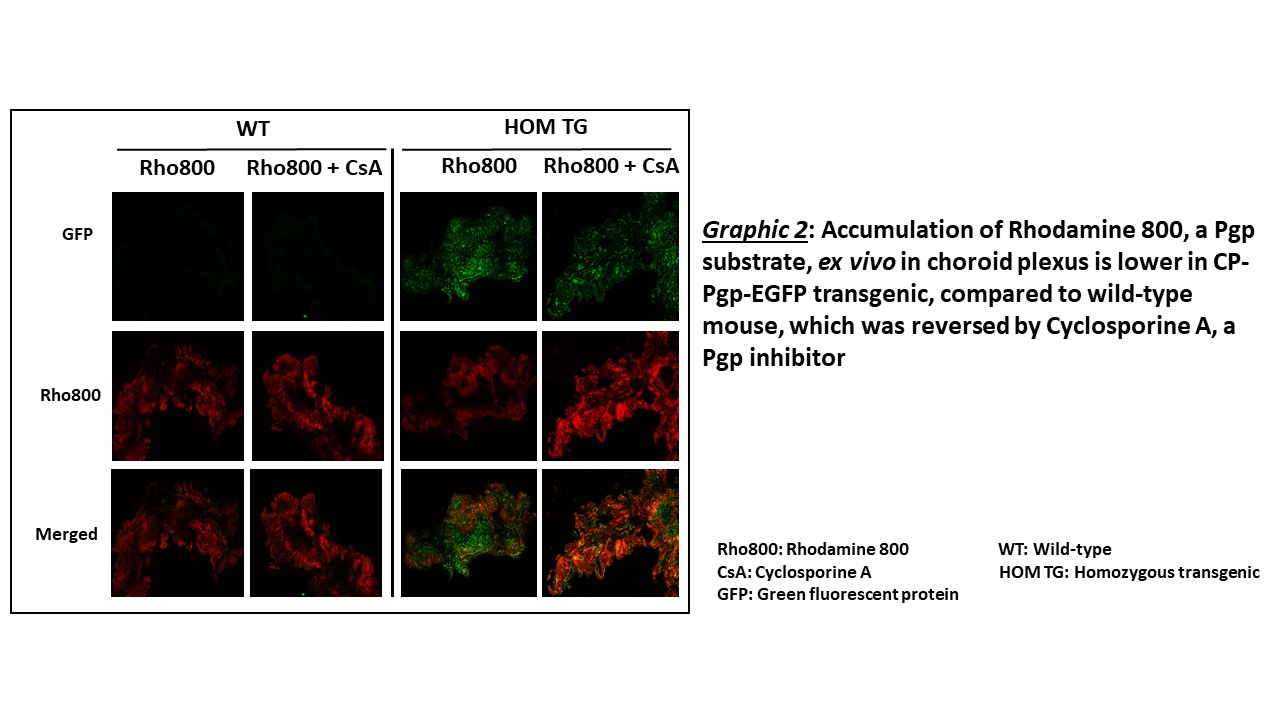 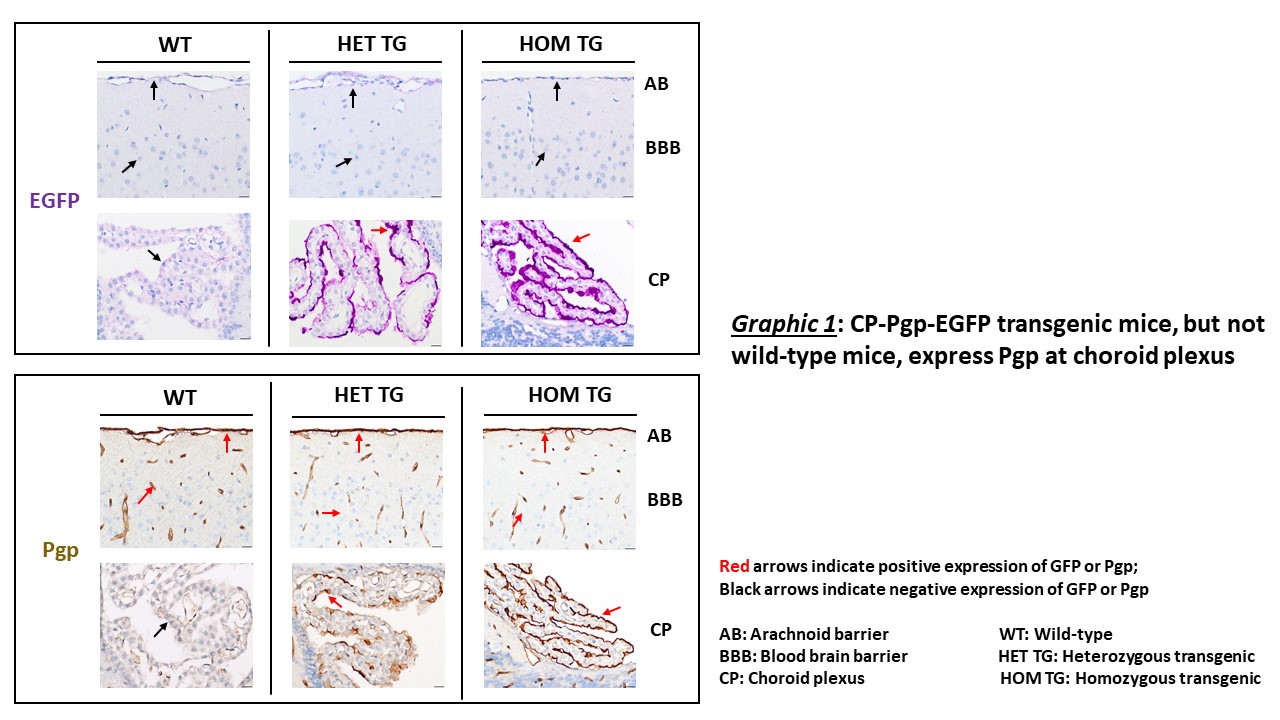