Purpose: SDD (spray dried dispersion) is one of the most popular approaches to improve in-vitro and in-vivo dissolution. However, the application of water-soluble polymers as the carriers such as PVP (polyvinylpyrrolidone), HPMC (hydroxypropylmethycellulose) and HPC (hydroxypropylcellulose), generally, around 1 to 5 times the amount of API, can results in challenging issues, such as poor tablet disintegration and slow dissolution due to gelation of fine polymer particles, which impedes water penetration into the tablets. The incorporation of a considerable amount of disintegrant and/or some inorganic salts helps alleviate this concern to some extent, in the condition that the polymer content is less than 10% in the tablet formulations. Although formulation development can be performed by using the traditional trial-and-error approach, it may be less effective and quite time-consuming, particularly, when the tablets are prepared at higher strength and larger dimension, without appropriate selection and optimization of formulation components. Fractional or full factorial design has been widely employed to identify CPPs and their design or control spaces. Yet, it has often been used incorrectly in formulation development DOE in the industry as the predefined formulation components are literally interdependent on one another rather than independent, i.e., when the percentage of one component changes the other components must be adjusted accordingly. Mixture design, as a special sort of response surface methodology, accounts for the dependence of response on proportionality of formulation components and has been successfully attempted to troubleshoot high PVP-K29/31 polymer loading tablet formulation platform development with poor disintegration in this study.

Methods: Per prior knowledge and experience, fillers, disintegrants and PVP K29/31 (a typical SDD polymer) were selected. Inorganic potassium and sodium salts were also incorporated as disintegrating agents in the formulations (Table 1). Those components and disintegration time were regarded to be the formulation factors and response, respectively. A total of 24 runs were generated from Mixture Design of Design Expert with the predetermined constraints of composition (Table 2). The compacts (11 mm, round, 600 mg weight) were prepared by direct compression at the same main force of 15 KN, followed by quality attribute characterization, which includes hardness, disintegration time and friability. The predictive model of immediately disintegrating formulations was established by statistically correlating the data with factors such as disintegration time. Three of the predicted formulations were selected at random for model validation and optimal formulation screening.

Results: The model terms and model were significant, as implied by the “p-value of Prob. > F" less than 0.05. The final equation in terms of significant factors was described as Disintegration=+122.9*A -4.28*B +40.45*C -14.77*D -8.79*E +17.91*F -15.88*G +191.65*H -143.56*AB -271.22*AC -96.61*AD -51.00*AE -180.92*AF -132.75*AG. R square 0.99 was indicative of fit model sufficiently accounting for the correlation between factors and responses. The insignificant difference between Adj R-Square 0.99 and Pred R-Squared 0.86 further showed worthwhile attempt to predict the optimal formulations using this fit equation. Externally Studentized Residuals followed normal distribution and were distributed randomly between the upper and lower confidence control limits (red solid lines). Given that the predicted values of disintegration time were likely to deviate positively from the actual values (note that negative deviation is beneficial to the actual experimental outcomes). In an effort to attenuate its impact, the disintegration time target was set as 0.1-3 min. 3 out of 24 predicted solutions were randomly selected and implemented, and the actual disintegration times were in accordance with the predicted range of 0.1-3 mins.

Conclusion: These fit models are capable of predicting PVP-K29/31 polymer loading formulations with fast disintegration time, which can potentially aid early phase SDD tablet formulation platform development. It is suggested that, in combination with prior knowledge and technical expertise, Mixture Design is a good optional tool to facilitate understanding of complex formulations with many interdependent variables and by fitting data from Mixture Design a predictive model could be established to help design SDD tablet formulation with high PVP level. 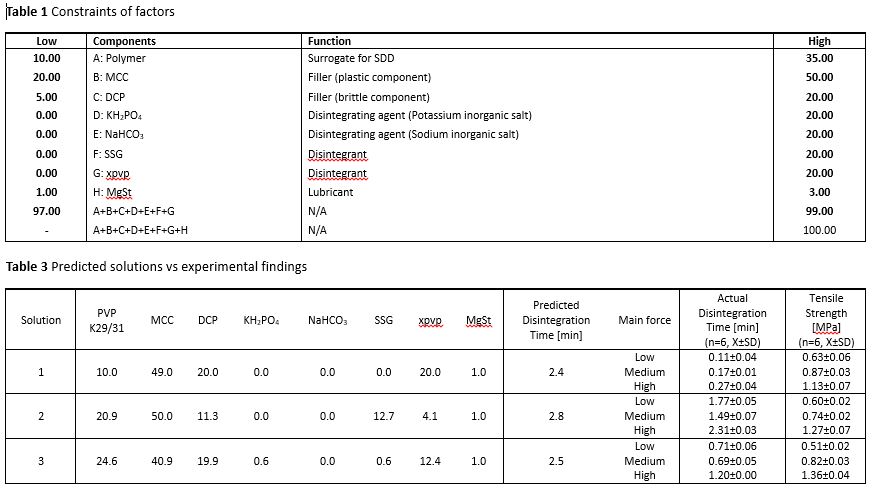 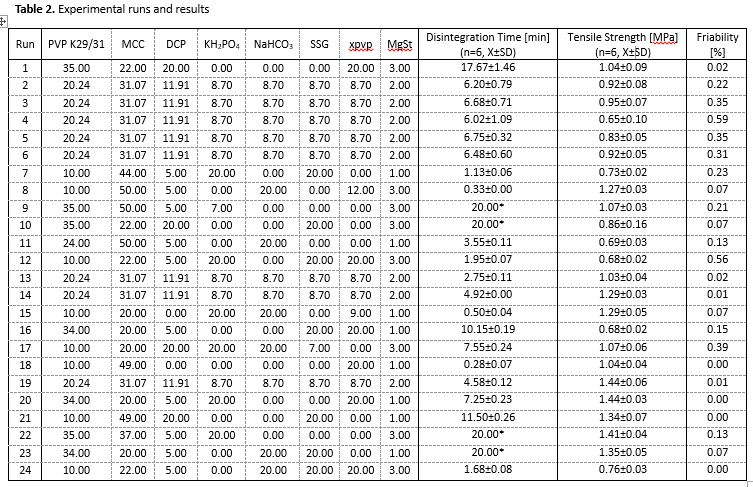 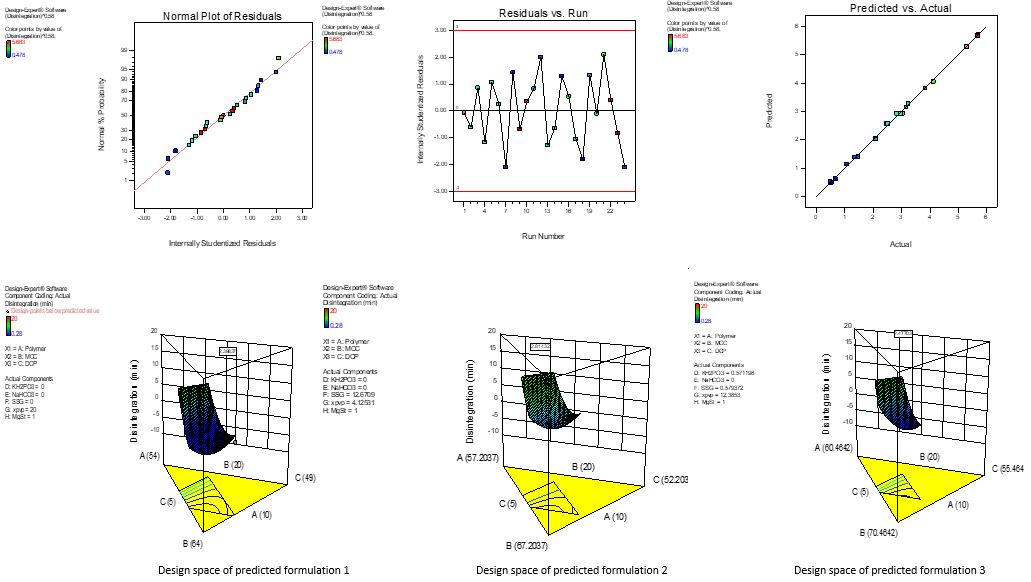