Purpose: Amorphous solid dispersions (ASDs) are gaining increasing interest as a solubility enhancement strategy for poorly aqueous soluble compounds. While the number of drug products formulated as ASDs is increasing in market, the dissolution mechanism of such formulations is still poorly understood. Recently, it has been noted that the fast release of drug from ASDs in aqueous media occurs when the drug and the polymer release congruently (simultaneously), and the release rate is controlled by the hydrophilic polymer. Generally, congruent release is only observed at low drug/high polymer loadings which ultimately leads to a high pill burden and hence, poor patient compliance. The maximum drug loading at which the drug and polymer release congruently and completely is termed limit of congruency (LoC). The purpose of this work was to understand if and how pH and ionization state on increase the LoC of ionizable compounds using atazanavir (ATZ), a weak base (pKa=4.5) as model compound and polyvinylpyrrolidone/vinyl acetate (PVPVA) as polymer.

Methods: Preparation of ASDs: ASDs of ATZ-PVPVA with various drug loading were prepared. Desired amounts of drug and polymer were weighed and dissolved in methanol such that the solid loading was 10% w/v. The ASDs were prepared by rotary solvent evaporation followed by vacuum drying and milling to yield powder. ASD powder was then sieved to give particles in the size range of 150-250 microns.

Dissolution of ASD tablets: Dissolution study was carried out at 37°C using a Wood’s intrinsic dissolution rate apparatus. 100 mg of the ASD powder was tableted in an 8mm die using a Carver hydraulic tablet press at a force of 2000 lbs. The die containing the tablet was mounted on the shaft of the overhead stirrer and then immersed into 100 mL of buffers of different pH conditions from pH 1 to pH 6.8. A stir rate of 100 rpm was used. 1 mL of the dissolution medium was aliquoted at desired time points and replaced with neat buffer. Samples were then analyzed for drug and polymer amount. Reverse phase high performance liquid chromatography (RP-HPLC) was used for determination of drug concentration whereas, polymer concentration was determined by size exclusion chromatography (SEC). Release rate of drug alone and polymer alone tablets were also obtained for control.

Results: At pH 6.8, where the drug is unionized, LoC was ~8%. 10% drug loading ASD performed drastically poor with API release of < 10%. At pH 4.5, where the drug is 50% ionized the dissolution profiles did not show any improvement. Only when the pH of the medium was decreased to 3 (97% ionization) meaningful increase in release was observed with ~50% API released at 10% drug loading compared to < 10% at pH 6.8. When the pH of the medium was further lowered to pH 2 (99.7% ionization), a significant enhancement in release was observed with LoC of 40%. The release rate was found to be influenced by both drug and polymer. At low pH 1 (99.9% ionization), dissolution rate of drug became faster than the polymer. Polymer was found to actually deter drug release from ASD solids. The results suggest that the gains in dissolution follow exponential trend with ionization. These findings are important to our understanding of ASD dissolution and their formulability in order to achieve high drug loadings. Knowledge of pH dependent behavior can aid us in 1) designing formulations with excipients that can alter the microenvironment pH of the formulation, leading to better release at higher drug loading and 2) taking advantage of the varying pH in the gastrointestinal tract to achieve desired release from ASDs.

Conclusion: Increase in ionization of the drug can result in fast and complete release of drug from ASD with relatively high LoC. The release rate is influenced by both drug and polymer. At pH where extensive ionization occurs, dissolution rate of drug becomes faster than the polymer. Polymer can in such cases deter drug release from ASD solids. Fast release at high DL in an ASD may be achieved by adding excipients that can alter its microenvironment pH. 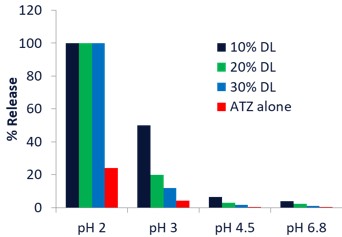