Purpose: The purpose of this study was to benchmark strategies to mitigate poor powder flow typical for spray dried amorphous solid dispersions (ASD) during downstream processing. The tested strategies were: S1) Mixing the ASD with a glidant during the secondary drying step in an agitated dryer, S2) Replace standard microcrystalline cellulose (MCC) in tablet formulation by a silicified microcrystalline cellulose grade. Both strategies can be implemented without changing the composition of the final tablet. These strategies were compared to standard process in which ASD is post-dried in a tray dryer, blended with standard tableting excipients and processed by dry granulation and compression (S3RC).

Methods: The ASD was manufactured by spray drying in a Buchi 290 and post-dried to remove traces of organic solvents to levels below ICH limits (1). Secondary drying was performed in a tray oven (S2, S3) or in a laboratory agitated dryer (S1). For S1, the total quantity of glidant required for tablets manufacture was charged in the agitated dryer together with the ASD.Blends were prepared in a turbula blender. FT4 powder rheometer was used to evaluate basic specific energy (SE) and conditioned bulk density (CBD), FT4´s shear cell was used to determine powder cohesion and flow function coefficient (FFc). Shear cell measurements were performed using a 6kPa pre-shear. Angle of repose and minimum orifice were determined using a BEP2 powder flow testing station, equipped with a Mitutoyo height gauge. The tests were performed and evaluated according to USP monograph < 1174 > (2). The same batch of MCC that was used in S1 and S3 was evaluated as well as a reference for a directly compressible material (3). Tablets were compressed on a Riva Piccola tablet press. S3 tablets were produced by direct compression and slugging to solid fraction of ~0.55 and milling followed by direct compression. Performance was characterized by dissolution test using an USP-2 apparatus with HPLC finish.

Results: The formulation as is (S3) shows poor powder flow, documented by cohesion (cohesive) angle of repose (passable flow – may require assistance) and minimum orifice values. Pre-mixing the ASD with glidant during secondary drying and use of silicified MCC lead to improved powder flow, especially in terms of improvement in cohesion (easy flowing) and FFc (free flowing). Decreased angle of repose (fair flow) and minimum orifice were observed. Despite the observed improvements, flow of these blends was still inferior to that of MCC and milled sluggs.

Processability was further evaluated in terms of powder tabletability. The linear portion of the tabletability plot, where the tablet target hardness is situated, was not affected by different ASD processing methods. A slightly decreased tabletability, similar to that observed after slugging, was detected when using silicified MCC. Tablet weight variation obtained when processing S1 and S2 tablets was superior to that observed after dry granulation. Only a minor impact on dissolution performance was detected using alternative downstream processing methods. The dissolution profiles are similar to those obtained by standard process – S3RC (Similarity factor f2 = 63 and 75 for S1 and S2, respectively).

Conclusion: Poor powder flow of ASD-containing blend could be partially mitigated by pre-processing the ASD with glidant already during secondary drying step or by substituting standard MCC for silicified MCC, without adverse impact on tabletability and dissolution performance. Despite the blend flow improved, the improvement was not comparable to that obtained by dry granulation. 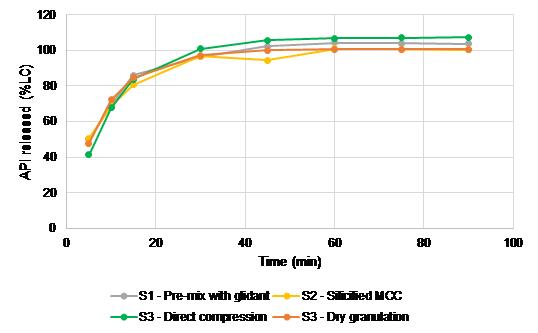 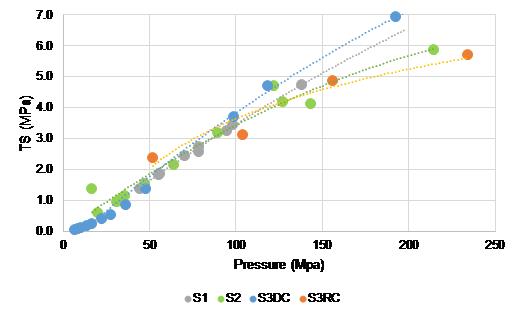