Methods: This is a retrospective regulatory submission and literature analysis of the characterization of human AME of irreversible TCI drugs approved by the FDA in an oncology indication.  The objectives of this review were: 1) to understand the challenges for human AME characterization of TCIs, 2) to review the outcome of the available studies, and 3) to identify trends in regulatory expectations to assess human AME of TCIs.

Results: Based on a review of the compilation of CDER new molecular entities, eight new irreversible TCIs were approved since in 2012 for oncology indications (Table 1).  From these 8 drugs, seven are oral tyrosine-kinase inhibitors (TKIs), while carfilzomib is a second generation proteasome inhibitor administered intravenously.  A human AME study was performed for the seven tyrosine-kinase inhibitors but not for carfilzomib, a modified tetrapeptide epoxyketone rapidly metabolized by peptidase cleavage and epoxide hydrolysis.

Human mass balance studies were performed in healthy male volunteers for all seven TKIs, with inclusion of female subjects in the acalabrutinib study only (Podoll et al, 2019).  All studies enrolled a minimum of 6 subjects (up to 8). The single dose of unlabeled drug administered was lower than the therapeutic dose for four (4) of the seven (7) TKIs, with a microdose of radioactivity (14C) used for three (3) of the studies. Per highlights of prescribing information, mean plasma half-life for the parent drugs ranged from 0.9 h (acalabrutinib) to 70 h for dacomitinib, and as such, collection of excreta varied from 7 to 84 days in the human AME studies. At the end of the studies, total radioactivity recovery (TRA; urine and feces combined) was >80% in all cases (Figure 1).
While in general, recovery of unchanged parent was < 1% of TRA in urine, that percentage varied from 1% (ibrutinib) to 85% (afatinib) in feces.

In addition to more classic elimination pathways, such as oxidation via CYP3A4, inclusion of non-traditional clearance pathways due to potential for direct (non-enzymatic) or GSH-S-transferase mediated conjugation with glutathione was observed for a majority of these TCIs, albeit at a negligible/minor level for afatinib and ibrutinib (Scheers et al, 2015; Stopfer et al., 2012). Another non-traditional excretion pathway reported for these drugs was via covalent binding to proteins, such as albumin, leading to relatively slow excretion in bound form, as observed for afatinib and osimertinib (Dickinson et al., 2016; Stopfer et al., 2012).  Ex vivo or in vitro evaluation of covalent binding to plasma proteins was unfortunately not included in all TCI AME studies, thus understanding of the fraction of the drug bound covalently to albumin remains unknown for a subset of these drugs.

Conclusion: In conclusion, as for non-oncology drugs, human AME can be performed in healthy volunteers for non-genotoxic and cytotoxic TCIs, with dose selection guided by the drug pharmacokinetic and safety profiles. Despite the challenges associated with non-traditional pathways of excretion and potential for covalent binding to macromolecules, well designed human AME studies can achieve adequate recovery and allowed for determination of the route of elimination and major clearance pathways of TCIs. 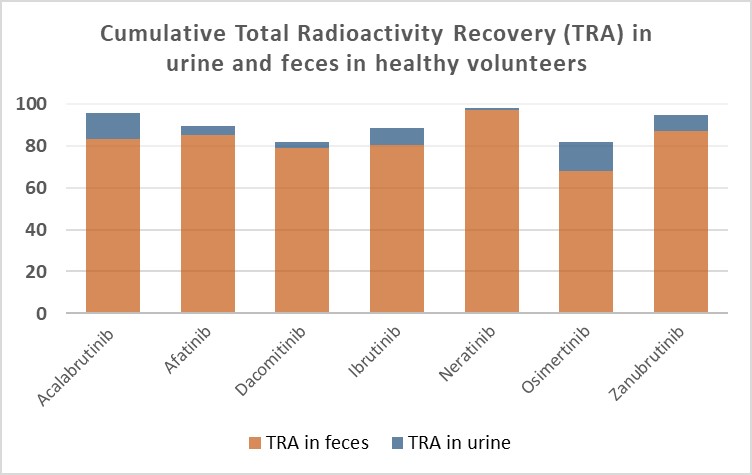