Purpose: In this study, a practical solution was provided to formulate a direct compression orally disintegrating tablet (ODT) formulation by selecting a functional super disintegrant to achieve fast disintegration and utilizing ion exchange technology to properly mask the bitter taste of active pharmaceutical ingredient (API). The superdisintegrant that is used in this study was Ac-Di-Solâ SD-711 NF, a very well established superdisintegrant in the pharmaceutical industry and is widely used to accelerate disintegration rate of tablets.  AMBERLITE™ IRP88 ion exchange resin (IER) was selected as a taste masking agent and an additional aid in disintegrating the tablet.

Methods: Five formulations were prepared using dextromethorphan (Dex) as model drug (Table 1). Formulations F1 and F2 were prepared through simple blending of all dry ingredient. Formulations F3 and F4 had a resinate synthesis first step. The resinates were synthesized using aqueous solutions of drugs with resin added at room temperature. Isolation was achieved by filtration and they were washed and dried.  The resinates were assayed and compared to calculated figures created with a loading calculator. AMBERLITE™ IRP88 resinates were then blended with the other dry ingredients to prepare the final formulation.
For each formulation, all ingredients were weighed and blended in a V-blender for 15 minutes. Tablets were compressed using a Stokes 512 tablet press with four stations. Standard 7/16” concave punches and corresponding dies were used. Target tablet weight was 300 mg. Disintegration times of tablets were determined using Distek 3100 disintegration tester. The test was conducted at 37°C in a medium of simulated intestinal fluid (SIF) at pH6.2. Six tablets per sample were analyzed and the mean is reported. Buccal dissolution experiments were run using a novel patented flow-through buccal dissolution test. The same SIF was used as the dissolution medium to show the taste masking efficacy of loading a bitter drug onto an ion exchange resin. The residence time in the cell was determined by the flow rate and volume of the cell.  The flow stream was split 2:1 to allow solids to be removed from the cell via a dip tube and to be analyzed either by flow through UV or fractions for HPLC.  The results were reported as a time concentration curve.

Conclusion: Ac-Di-Solâ SD-711 can be used to formulate ODTs and effectively disintegrate tablets within seconds. The formation of complexation between AMBERLITE™ IRP88 and dextromethorphan achieved significant taste masking. The combination of Ac-Di-Solâ SD-711 and AMBERLITE™ IRP88 enables the successful formulation of ODT to be produced via traditional tableting process. 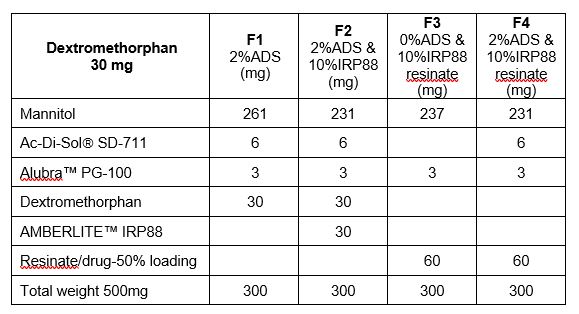 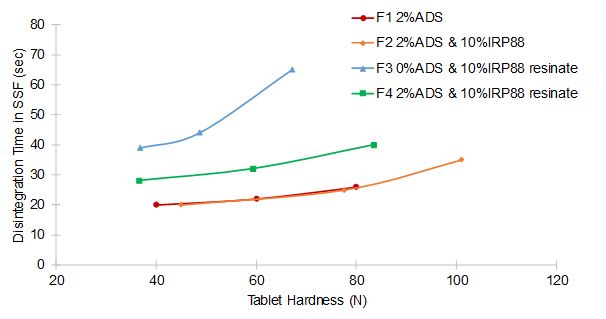 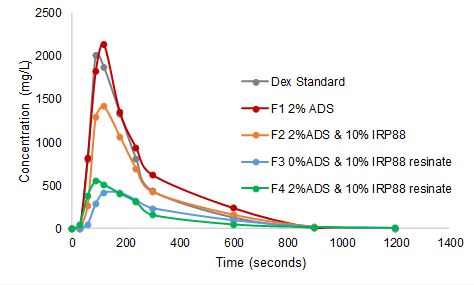