Purpose: Solubility and permeability are important characteristics of active pharmaceutical ingredients (APIs) since they directly impact bioavailability. For solubility-limited APIs, formulation of supersaturating drug delivery systems (SDDS) may enhance their bioavailability by increasing absorption. Formation of nanodroplets in SDDS during dissolution has been suggested to be beneficial for bioavailability. Moreover, it has been suggested from in vitro and in vivo data that the greatest benefit is obtained when smaller nanodroplets are formed.1–5 The purpose of this research was to investigate the mechanism of nanodroplet size stabilization by four different surfactants, sodium dodecyl sulfate (SDS), polysorbate 80 (TWN), d-α-tocopheryl polyethylene glycol 1000 succinate (TPGS), and cetrimonium bromide (CTAB) using clopidogrel (CPD) as a model API that forms nanodroplets at a low drug concentration.

Methods: Clopidogrel drug-rich nanodroplets were produced by adding a small amount of pre-dissolved drug in methanol into phosphate buffer 50mM pH 6.8 containing the surfactant to be evaluated. The final concentration of CPD was 70µg/ml. The size of the drug-rich nanodroplets was monitored by nanoparticle tracking analysis (NTA) and dynamic light scattering (DLS) for four hours. The interaction of surfactant and clopidogrel was evaluated by 1H nuclear magnetic resonance (NMR) spectroscopy and by zeta potential measurements. All experiments were conducted at 37°C except NMR experiments were conducted at 37°C or 50°C.

Results: The concentration needed to stabilize nanodroplets is surfactant dependent (Figure 1). For SDS, 50µg/ml was necessary to maintain a constant size for four hours, while for TPGS and TWN 4µg/ml and 5µg/ml were sufficient respectively. CTAB was not effective at any of the tested concentrations at stabilizing the nanodroplets to size increase. Ionic surfactants, SDS and CTAB, produced an increase in the Z-potential magnitude as expected (Figure 2). This suggests that ionic repulsion might be contributing to stabilization by SDS; however, in the case of CTAB, there was an increase of Z-potential but nanodroplets agglomerate (Figure 2). For the nonionic surfactants, TWN and TPGS, a reduction of Z-potential suggests that steric rather than ionic repulsion perhaps contributes to nanodroplet size stabilization.NMR results for CPD showed two sets of CPD peaks in buffer at 50°C; one set of peaks is derived from dissolved CPD in the aqueous phase, while the other peaks originate from CPD in the CPD-rich nanodroplets (Figure 3). The dissolved CPD peaks did not shift in the presence of SDS, indicating that the chemical environment of CPD was not significantly changed by adding SDS. In contrast, the dissolved CPD peaks shifted upfield in the presence of CTAB, indicating a more hydrophobic environment. The upfield shift could be the result of solubilization of CPD into a hydrophobic core of CTAB micelles. The chemical shift and shape of phase-separated CPD peaks were not changed in the presence of SDS and CTAB. Thus, SDS and CTAB did not affect the molecular state of CPD in the nanodroplets. The dissolved CPD peaks largely shifted upfield in the presence of TPGS 50µg/ml (Figure 3). The change of chemical environment of the dissolved CPD toward a more hydrophobic environment could be due to the solubilization of CPD into TPGS micelles. In contrast, the phase-separated CPD peaks shifted downfield indicating a more hydrophilic environment which may be the result of partitioning of TPGS into the CPD nanodroplets. The dissolved CPD peaks shifted upfield in presence of TWN 50µg/ml most significantly compared to other surfactant solutions, indicating that a large amount of CPD was solubilized into TWN micelles (Figure 3). Furthermore, most of the dissolved CPD peaks were so broad that they merge with the baseline. A possible explanation is the mobility suppression of CPD by solubilizing into TWN micelle and/or the peak broadening derived from the chemical exchange of the dissolved CPD peaks and CPD nanodroplet covered by TWN. When the nanodroplet concentration was increased (CPD concentration 220µg/ml), the nanodroplet peaks became stronger and were clearly observed in the NMR spectrum. The phase-separated CPD shifted downfield in TWN solution compared to buffer, indicating the partitioning of TWN into the nanodroplets. 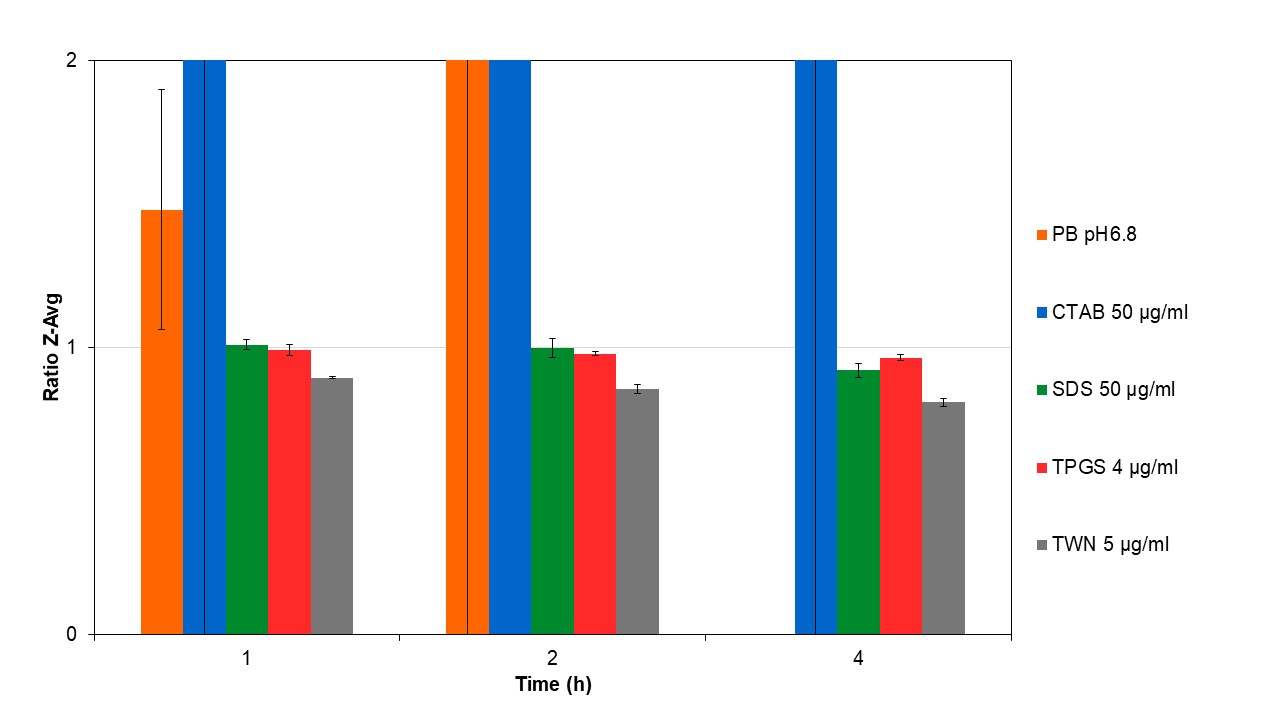