Purpose: Delayed-release formulations are defined by the United States Pharmacopeia as deliberately modified products (e.g., including enteric coating) in order to avoid release of the drug substance in the stomach and thus to protect acid-labile drugs from the gastric environment or to prevent adverse events such as irritation. These formulations have been widely applied in tablets, and to a lesser extent in capsules, where the enteric properties are secured by the application of an enteric coating. During formulation development, the coating material formulation, multilayer structure, and application process must be developed and customized to the core drug. The coating manufacturing process adds additional processing steps and complexity, which is a burden during early stages of drug formulation development. Additionally, some therapeutic moieties are not suitable for tableting and are better candidates for encapsulated formulations that offer enteric protection from gastric juices.

To date, hard capsules made from gelatin or HPMC have been used primarily for immediate-release products. When delayed-release is required, hard capsules are coated to provide enteric protection but as yet little success has been achieved in the production of a capsule shell that exhibits enteric properties without further application of an enteric polymer coating. Therefore, an uncoated two-piece hard enteric capsule, conformable to the strict criteria in the pharmacopoeia, i.e., less than 10 % dissolution after 2 hours in pH 1.2 medium and simultaneously securing immediate-release in pH 6.8 medium, is desired in which the shell film itself comprises a commercially available pharmaceutical-grade anionic enteric coating materials.

Methods: The enteric capsule shells were prepared by a cold gelling dipping method without any polysaccharide gelling agents or gelatin. The capsule shells were dipped from an aqueous suspension consisting of a well-known anionic enteric polymer and a neutral and water-soluble film-forming polymer-, and then dried at room temperature. Since the capsule shell contains only a residual amount of non-volatile alkali metal, i.e., less than 1 wt%., and no organic solvents no hazardous risk of or adverse influence on stability was expected.

Dissolution tests were performed using a dissolution apparatus with a fiber-optic UV detection system (Opt-Diss, Leap Technologies Inc., United States), which referred to Japanese Pharmacopeia or United States Pharmacopeia. The capsules were filled with a formulation consisting of 20 % acetaminophen. In some cases, the joint part of the cap and body was sealed with a similar solution (band-seal) of the capsule shell material to avoid undesired solution penetration.

Conclusion: This study showed that a novel uncoated enteric two-piece hard capsule showed excellent enteric profile in vitro and in vivo study. The capsules did not rupture in the stomach. Disintegration began only after the capsules had passed into the small intestine of the beagle dogs. 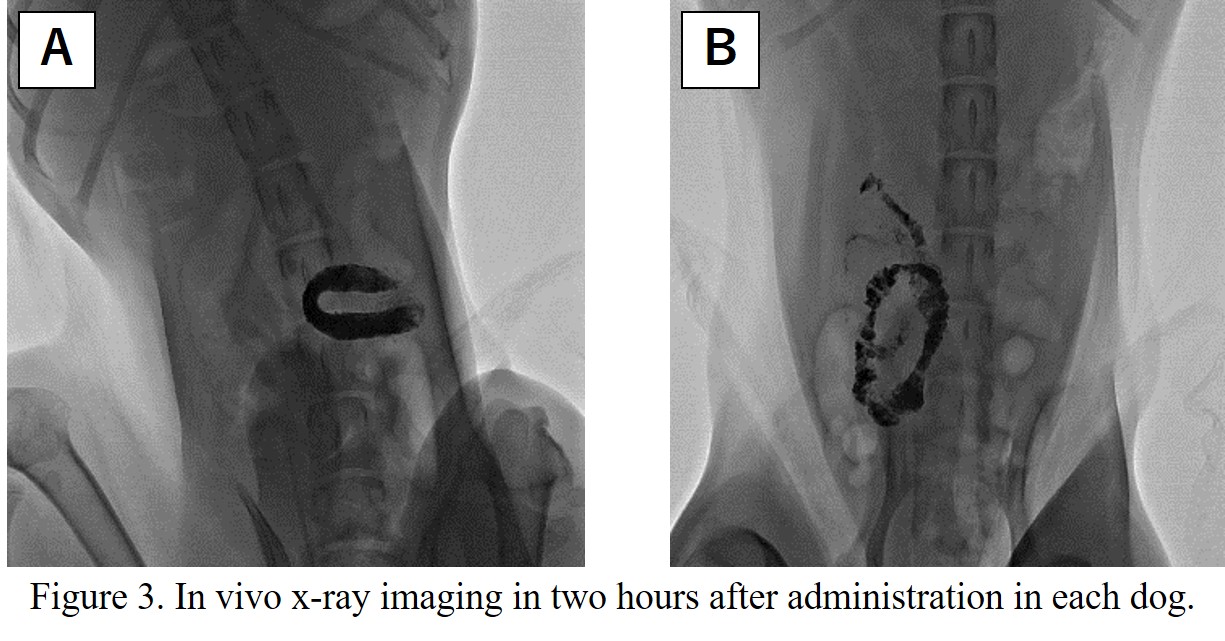