Purpose: During cancer therapy, patients often suffer from stomatitis. The complication of stomatitis is characterized by trouble eating, drinking, swallowing or even speaking, resulting from the significant pain caused by ulceration of the oral mucosa. Stomatitis has a direct impact on quality of life and may affect continuation of therapy; therefore, the treatment and management of stomatitis is clinically important. Mouthwash is recommended for oral cleanliness and moisturizing. Further, mouthwash with solutions of drugs, e.g., dexamethasone and allopurinol, has been reported to be effective in the prevention and treatment of stomatitis induced by cancer chemotherapy. However, pain caused by irritation from gargling, and risks of choking and aspiration, can occur with mouthwash, which may lead to reduced adherence to its use.
Foam has low density and is easily spread; thus, allowing it to be applied across a wide area. Due to these properties, foam formulations containing drugs for the treatment of stomatitis are considered beneficial for application in the oral cavity, as they can reduce pain and the risks of choking and aspiration. Furthermore, the expected duration of the drug in the mouth is longer than that of mouthwash, and the drug can be retained in the oral cavity. However, to our knowledge, there are currently no reports about the preparation and use of foam formulations for the application of drugs to prevent and treat stomatitis, and that also show the relationship between the physical properties of foam formulations and their palatability, which has affected acceptance of and adherence to the use of these formulations.
In this study, we aimed to develop foam formulations for use in the treatment of stomatitis. We first prepared foams from different concentrations of the various types of methylcellulose, then evaluated the relationships between their physical properties and palatability.

Methods: We prepared 25 different foam formulations from five different concentrations of the five types of methylcellulose (SM-4, 25, 100, 400, and 4000, Shin-Etsu Chemical Co., Ltd., Tokyo, Japan; Figure 1). Methylcellulose was diluted with water. The foams were prepared by discharging from a Pump Foamer (F7, Daiwa Can Company, Tokyo, Japan). We measured the viscosity of the methylcellulose solutions, density and weight of foam discharged on one pumping. Each foam (5.0 g) was put in a funnel, and the collapsed foam solutions were collected. The foam collapse ratio (%) was determined by the weight of the collected solutions at 60 min.
To evaluate the disappearance time and overall palatability of 12 foam formulations (Figure 1), 15 healthy young volunteers (7 males, 8 females; age 23.1 ± 0.9 years, mean ± standard deviation) participated in a randomized crossover trial. The study protocol was approved by the Ethics Committee of the University of Shizuoka (Shizuoka, Japan). The volunteers were asked to take one push of foam from the Pump Foamer into their oral cavity and to hold the foam until they felt it had disappeared. The disappearance time of foam in the oral cavity was measured. Then, they spat out the residue of foam and evaluated the palatability of each formulation using a visual analogue scale (VAS) in which a score of 100 indicated “Good palatability”. 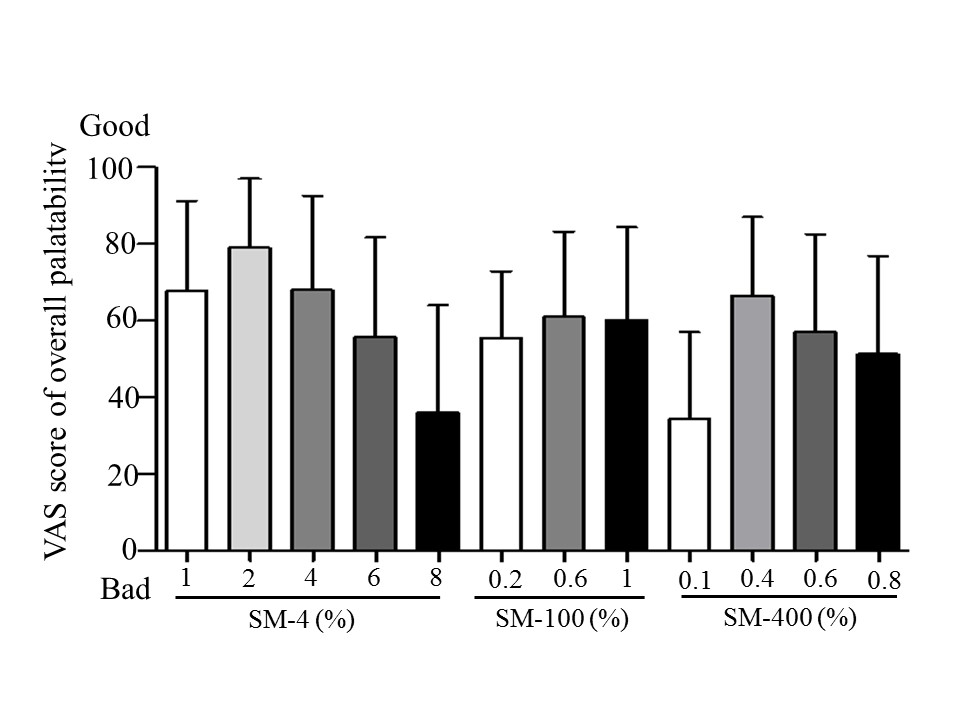 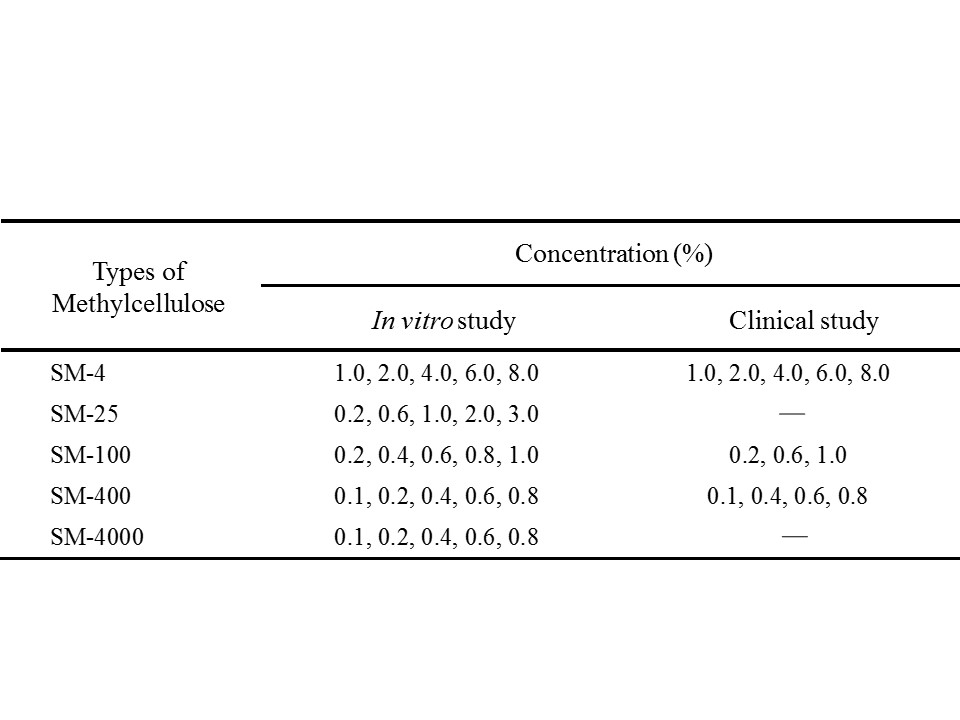