Purpose: Down syndrome (DS, trisomy 21) is the most common survivable chromosomal aneuploidy in humans. Persons with DS are at increased risk for the development of comorbidities through the lifespan (e.g., thyroid dysfunction, respiratory tract infections, arthritis, and Alzheimer’s disease). Comorbidities in persons with DS necessitate pharmacotherapeutic management with various drugs. Routine utilization of therapeutic monoclonal antibody drugs (mAbs) in persons with DS is difficulted due to the lack of pharmacological data derived from this population (1). The neonatal Fc receptor (FcRn) plays a key role in controlling the traffic and recycling of IgG, albumin, and mAbs (2). The dynamics of FcRn-mediated endosomal sorting and trafficking are crucial to the salvage of molecules containing Fc-domains. Persons with DS have widespread cellular protein trafficking defects. Endosomal-lysosomal abnormalities in individuals with DS are linked to the altered expression of the chromosome 21 gene APP (3, 4). We hypothesize that APP-mediated endosomal defects impact the sorting and recycling of FcRn-IgG/mAbs complexes. The purpose of this study was to examine FcRn-mediated traffic and recycling of IgG in the context of DS.

Methods: Studies were performed in fibroblast cell lines derived from donors with DS and diploid lines (NDS) from age- and sex-matched subjects. FCGRT and APP mRNA expressions were analyzed by QRT-PCR. The impact of APP on the expression of FCGRT was investigated by transfections with an anti-APP siRNA pool. The dynamics of IgG uptake and intracellular transport was evaluated by live-cell imaging with a spinning disk confocal microscope and quantitative image analyses. Cellular IgG recycling was examined with ELISA.

Conclusion: These data suggest that FCGRT expression is linked to expression of the key chromosome 21 gene APP. Altogether, our results suggest that endosomal-lysosomal abnormalities in the context of DS impact on the intracellular traffic of IgG. This study contributes new data to define the mechanistic contributions of the APP-Rab5 pathways to FcRn-mediated sorting and recycling of IgG and therapeutic mAbs in DS. 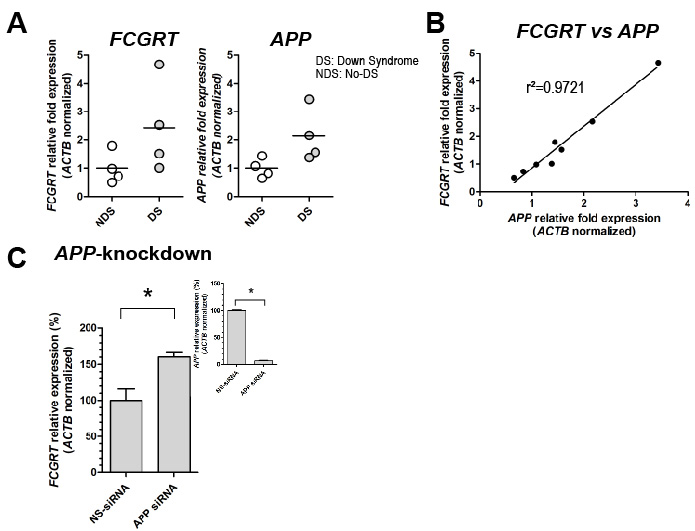 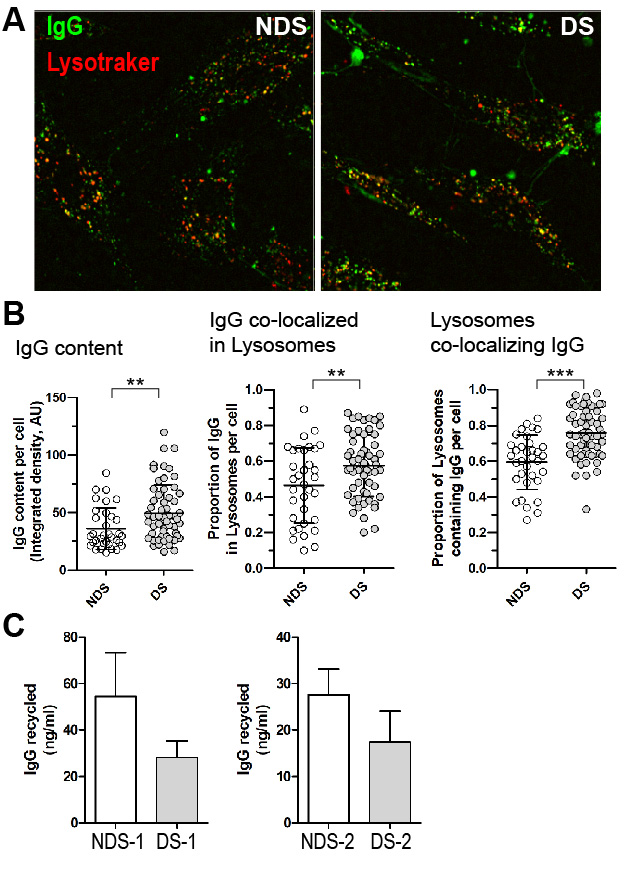