Purpose: Undesirable taste is one of the important formulation problems associated with bitter taste drugs. Effective taste masking can be achieved by various reported approaches such as fluidized-bed coating, supercritical fluids, complexing agents, or pro-drug approach. However, lipid-based formulations have gained interest in recent times and are applied for numerous purposes such as controlled release, improvement of swallowability, moisture protection, and taste masking applications. The objective of the current study was to investigate the potential of different lipids in masking the unpleasant/bitter taste of caffeine citrate by hot melt extrusion technique.

Methods: Caffeine citrate was used as a model drug. Two lipids, glyceryl dibehenate (Compritol® 888 ATO) and glyceryl palmitostearate (Precirol® ATO 5) with similar melting ranges and different compositions were investigated in the study. Caffeine citrate was blended individually with Compritol® and Precirol® at a drug load of 20% and 30%. The physical mixtures of drug and lipids were extruded using an 11mm co-rotating twin-screw extruder (Process 11 twin screw extruder, Thermo Fisher Scientific) utilizing Thermo Fischer standard screw configuration. The extrusion was performed over the melting range of 70-75 °C for Compritol® formulations and 50-60 °C for Precirol® formulations at a constant screw speed of 50 rpm. Solid-state characterization of the extrudates was performed by Differential Scanning Calorimetry (DSC). Dissolution studies were performed on the milled extrudates using USP apparatus I (50 rpm) in 500mL of simulated salivary media (pH 6.8) to assess the extent of drug release in the salivary pH.

Results: Thermal behavior of the physical blend and the extruded formulations were examined by differential scanning calorimetry (DSC). For Compritol® formulations, DSC thermograms of the extrudates showed the presence of two characteristic endothermal peaks one at 168°C which shows the presence of crystalline caffeine citrate and the other at 72.9°C (Compritol® melting point) as shown in figure 2. Similarly, for Precirol® formulations, there were two characteristic peaks observed, one at 168°C and the other at 52°C (Precirol® melting point). These observations reveal that caffeine citrate is in crystalline form. Dissolution testing using salivary media (pH 6.8) was used as a primary screening method for assessing the taste masking ability of the formulation. All the formulations showed low drug release (1%-2%) in simulated salivary media (Figure 1). Further other characterization studies such as solubility, bitter threshold dissolution in pharmacopeial media, and FTIR will be performed. 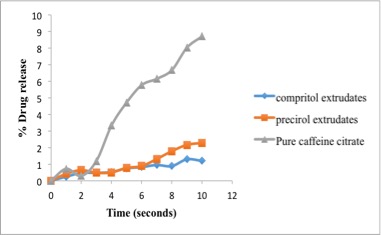 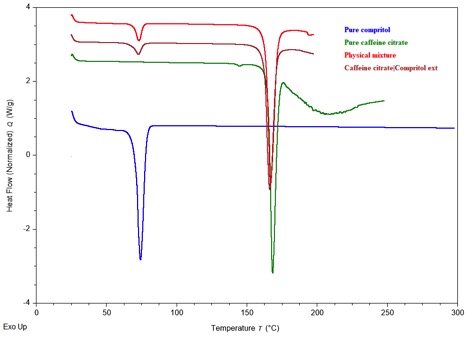