Purpose: Amorphous solid dispersions (ASDs) are molecular mixtures of amorphous drug and carriers which are often used as a promising strategy to improve the bioavailability of poorly water-soluble compounds. It is. The carriers in ASDs can enhance the physical stability and bioavailability of an amorphous drug through inhibiting crystallization in both solid and liquid states [1]. Thus, the selection of carriers and ratios plays an important role in optimizing the physical stability and further manufacturability of the ASDs. In this study, the physical stability of spray-dried dispersions containing indomethacin (IND) was studied. Three polymers, Poly(vinylpyrrolidone) (PVP) K30, hydroxypropyl methylcellulose acetate succinate (HPMCAS) L and H grade, were used as model carriers. In addition, the physicochemical properties and compaction behaviors of the model ASDs with different carrier type and drug loading were evaluated.

Preparation of ASDs: Dispersions were spray-dried using Buchi mini spray dryer B-290. IND was dissolved in a 2:1 (w/w) mixture of methanol and acetone followed by the addition of the polymer. The drug ratios were 10, 30, and 50% (w/w) of the total solid content in the solution. The total solid concentration in the final solutions was 10% (w/w). The dispersions were dried under vacuum overnight and the resultant materials were used for further analysis.

Powder characterization and compaction: Particle size distribution, surface area, and true density of spray-dried dispersions were measured. The compaction properties were tested using a Styl’One compaction simulator at compression pressure ranging from 25 to 125 MPa under 5 mm/sec compaction velocity. Five replicate tablets were made. After compression, each tablet was weighed and measured for thickness, diameter, and hardness with the use of MT50 hardness tester immediately following the ejection. Tabletability, compressibility, compactibility, elastic recovery, and Heckel analysis were analyzed using the Analis™ software. The entire process is shown in Figure 1.

Results: All ASDs were confirmed to be in the amorphous state by modulated DSC. Physical stability of ASDs before and after water uptake was investigated by FT-IR and modulated DSC. The preliminary data shows the Tg continuously decreases as the amount of IND increases, which suggests that a higher drug loading is associated with higher molecular mobility and lower stability. This result is consistent with the data of the physical stability study. Moreover, we observed that the ASDs with relatively strong drug-carrier interaction did not show any crystallization or phase separation compare with other ASDs (Figure 2). This indicates that the strength of drug-carrier interaction may play a dominant role in ASD stability rather than the hygroscopicity of the carrier. According to the physicochemical measurement, the particle size of dispersions was determined as around 10 μm. The ASDs containing 10% of drug loading exhibited the highest surface area compare with ASDs of high drug loading (Table 1). Compaction behavior of ASDs was studied to assess the effect of carrier type and drug loading on the mechanical strength of ASD tablets. In the compaction study, an increase in the tensile strength of all the materials directly correlated with an increase in compression force. The tabletability decreased with increasing drug loading. According to the compressibility results, the compact porosity of ASDs decreased with an increase in the compression force. However, the drug loading did not affect the compressibility of ASDs significantly. The compactibility study shows that the compact tensile strength increased, and porosity decreased with an increase in the compression force. This implies that particle bonding strength decreased as drug loading increased in the ASDs. The tabletability profiles of ASDs with different carriers showed a slight difference, which may due to the differences in the particle sizes and the interactions between API and different carriers.

Conclusion: All carriers appeared to reduce the crystal growth rates of amorphous IND. The study shows that the physical stability of ASD is highly influenced by the drug loading. The strength of drug-carrier interaction plays an important role in ASD stabilization. Meanwhile, the drug loading may affect the surface area of ASD which could further impact the compaction behavior and dissolution profile of ASD. Furthermore, both carrier type and drug loading contribute to the compaction behavior of ASD. Therefore, the selection of carrier type and drug loading is critical in developing ASD formulation and its final dosage form. 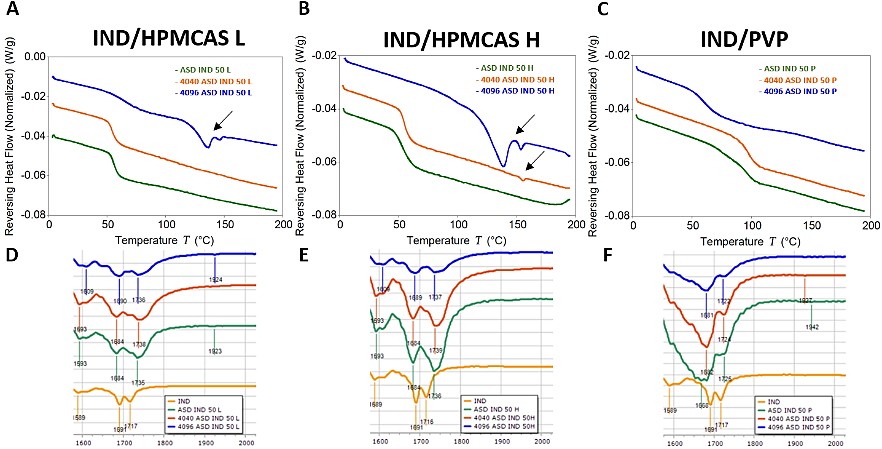