Purpose: Dissolution of amorphous solid dispersions (ASD) under non-sink conditions is complex with the possibility of several phase transitions within the dissolving medium and the ASD matrix.1 Recent studies have observed two dissolution regimens.2 At lower drug loadings, the release of drug from an ASD has been reported to be polymer-controlled while at higher drug loadings, the dissolution is generally drug-controlled.2 Ritonavir is commercially available as the ASD (Norvir® tablet) with copovidone at 15% w/w drug load. Indulkar et al. has shown that release of ritonavir from the ASD is polymer controlled at this drug loading.1 The release of ritonavir was found to be congruent with polymer (copovidone) release up to 25% drug load, but switched to drug-controlled release at around 30% drug load, and higher.1 In the current research, we modelled polymer controlled drug release from ASDs using a Particle Population Balance (PPB) model implemented in the Simcyp Simulator V19. This model enables simultaneous consideration of release from two moieties / solid states from the dosage form. As an alternative, ritonavir was also simulated as an amorphous drug without inclusion of polymer controlled release for comparison.

Methods: Figure 1 illustrates the two approaches investigated in this work. In order to simulate polymer-controlled dissolution of ritonavir (Approach 1) from Norvir® tablets, solid state 1 (SS1) and solid state 2 (SS2) were parameterized as copovidone and amorphous ritonavir respectively. Since the release of ritonavir and copovidone was found to be congruent at the drug loading in the Norvir® tablet1, the in vitro dissolution profile of ritonavir from Norvir® in FaSSGF was used as the input release profile, under the assumption that the in vivo dissolution of ritonavir is likewise is controlled by the solubility of copovidone (SS1) in water ( >100 mg/mL). In the simulation, dissolved ritonavir precipitates solely to amorphous ritonavir (SS2) in accordance with two-stage in vitro pH shift experiments. Key parameters of amorphous ritonavir such as free base amorphous solubility, bile-micelle partition coefficients and in vivo precipitation parameters were either obtained from the literature or estimated by modeling in vitro biopharmaceutical experiments using the Simcyp In Vitro data Analysis (SIVA 3) Toolkit. For comparison, ritonavir was also simulated as a single moiety with input parameters of the amorphous state (Approach 2). These two scenarios were simulated using 10 trials of 27 individuals dosed with 100 mg Norvir® tablet under fasting conditions in accordance with the study design applied by Ng et al.3

Results: Figure 2 and Table1 show the results of the two approaches. Mean predicted and observed Cmax and AUC0-t parameters were predicted within the bioequivalence limit (0.8-1.25) for fasted state in healthy volunteers using both approaches. However, Cmax was better captured when polymer-controlled ritonavir release was applied. This is due to the greater extent of absorption of ritonavir from the upper gastrointestinal tract in Approach 1 than in Approach 2.

Conclusion: Although both simulation approaches were able to adequately capture exposure of ritonavir in the fasted state, we believe Approach 1 is more mechanistically correct and in line with the in vitro observations.1 The modeling approach described here warrants further verification/validation with additional ASD drug products. 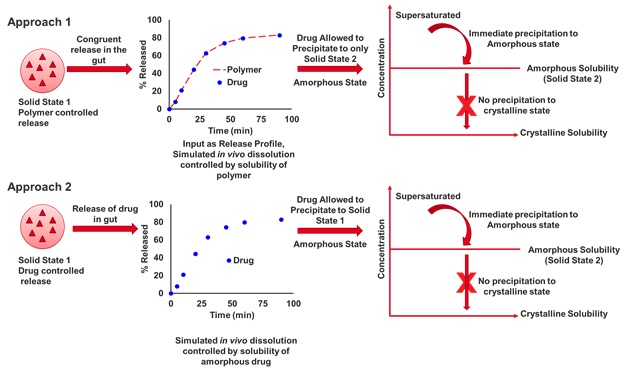