Purpose: Mesalamine (5-aminosalicylic acid, 5-ASA) is used in the treatment of mild-to-moderate ulcerative colitis. It acts locally on the colonic mucosa, and therefore, pH-dependent coating of solid oral dosage forms is commonly used for oral delivery of the drug to the colon. The pH of gastrointestinal tract increases progressively from stomach (pH2.0 - 3.0), through small intestine (pH 6.5 - 7.0) to the colon (pH 7.0 - 8.0). The purpose of this work was to impart acid resistance to the dosage form in pH 1.2 and pH6.0, while achieving complete drug release at pH7.2 as per the USP monograph for mesalamine delayed release (DR) tablets.

To evaluate enteric protection, coated tablets were tested for dissolution performance using a USP dissolution bath and below dissolution media sequence at 37.0±0.5ºC:

Coated tablets were packaged in HDPE bottles and stored at 30°C/65% RH and 40°C/75% RH for 6 months and evaluated for stability following the same methodology.

Results: Enteric performance testing of mesalamine tablets showed that tablets remained intact during the acid stage (0.1 M HCl) and buffer stage I (buffer pH 6.0) followed by rapid disintegration in buffer stage II (buffer pH 7.2).  The assay content and total impurities for mesalamine tablets were 102.0% and 0.012% (t0), respectively. Dissolution testing indicated that the drug loss was less than 1% after 2 hours in the acid media (0.1N HCl) and 1 hour in the buffer stage I. This was followed by rapid release of drug in phosphate buffer, pH 7.2 (Figure 2).

The results at 1, 3 and 6 months showed no significant change in enteric performance, assay content (99.8 – 106.2%), total impurities (0.012 – 0.033%) and release profiles regardless of storage conditions, confirming that the final dosage forms were stable in accelerated conditions. 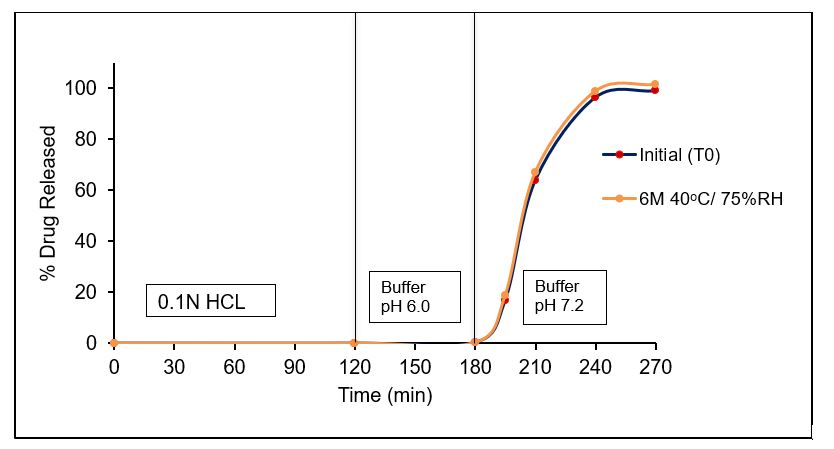