Purpose: Warfarin is a commonly prescribed anticoagulant agent, which exists in two enantiomeric forms, S- and R-warfarin. Supra- or sub-therapeutic doses of warfarin may result in substantial morbidity and mortality due to failure to prevent thromboembolism or bleeding complications. Warfarin has a very narrow therapeutic window, which may lead to a very large variation in the optimal international normalized ratio (INR) with small variations in the dosage administered. S-warfarin has been reported to have a higher anticoagulant potency (3–5 times) than R-warfarin. However, the quantification of individual enantiomers of warfarin in biological fluids is necessary to understand its pharmacokinetics profile. It would be ideal and highly valuable to have a simple analytical method that could determine the warfarin enantiomers (S and R) in human plasma samples for clinical patient care. The purpose of the present study was to develop a suitable, simple, precise, fast, cheap, accurate, robust and reproducible chiral AGP–HPLC–DAD for a reliable simultaneous quantification of warfarin enantiomers (S and R) in human plasma samples using naproxen as an internal standard.

Methods: In this study, the effect of slight deliberate variation in chromatographic parameters such as mobile phase composition, pH, ion-pair reagent concentration and gradient elution on retention time and resolution factor was evaluated systematically. S- and R-warfarin plasma concentrations were measured using chiral α1-acid glycoprotein column on high performance liquid chromatography coupled with diode array detector (APG-HPLC-DAD) method. The validation of APG-HPLC-DAD method was critical to ensure that the results were suitable for their intended purpose and was conducted with reference to the International Council for Harmonization and FDA’s guidelines for bioanalytical method validation. The developed method was applied to plasma samples withdrawn from 64 patients who received daily doses of warfarin varying from 1.00 to 11.50 mg for at least one month. One blood sample from each patient was withdrawn at any time point at least 16 hrs and up to 7 days post-last warfarin dose. S-warfarin, R-warfarin and naproxen (internal standard) were extracted from human plasma which had been made acidic with 3.5 N sulfuric acid into diethyl ether. The diethyl ether layer was removed and evaporated, and the residue was reconstituted in 200 µl of n-propanol. A 20 µl was injected in HPLC-DAD system with detection at 304 nm. Baseline separation was achieved on a silica-gel bonded chiral AGP column (150×3.0 mm, 5µm). A novel gradient of phosphate buffer (25 mmol/L, pH=7.0) and n-propanol was delivered at a flow rate of 0.5 mL/min and the run time was 10 minutes.

Results: During the development phase, the use of n-propanol and water as the mobile phase resulted in asymmetric peak with a greater resolution factor (Rs≥1.5). The addition of potassium dihydrogen phosphate to the mobile phase resulted in drastic rise of resolution between S-warfarin and R-warfarin. It is observed that, the optimum resolution factor between S-warfarin and R-warfarin was (1.41˂1.5) below than the acceptable value of resolution factor (1.5) which it was determined under following conditions: at 85%A (KH2PO4, 25 mM, pH=7) and 15%B (n-propanol). Hence, the peak shape and symmetry between S-warfarin and R-warfarin were found to be excellent when the linear gradient elution of mobile phase was used with better resolution factor (Rs=1.86) as shown in Figure 1.  The retention times of naproxen (IS), S- warfarin and R-warfarin were approximately 1.90, 5.10 and 5.80 minutes, respectively. The established linearity range was linear (r2≥0.9990) over the concentration range of 0.035 – 2.50 µg/mL for both warfarin enantiomers (S and R). The lower limit of detection (LLOD) for S- and R-warfarin were 0.009 and 0.008 µg/mL, respectively. The recovery for both warfarin enantiomers (S and R) at three spiked levels of blank rabbit plasma (0.50, 1.25 and 2.50 µg/mL) were 92.26, 98.95 and 81.29% for (S)-warfarin and 101.36, 105.40 and 83.16% for (R)-warfarin with CV% values at 0.30-3.10% (Figure 2). The intra- and inter-assay precision, defined by the percentage coefficient of variation(CV%) of the quality controls observed in the analysis of quality control samples at three levels (0.025, 0.25 and 1.25 µg/mL) representing the low, medium and high concentrations, ranged from 4.10% to 9.12% for S-warfarin and from 3.48% to 6.81% for R-warfarin. The enantiomeric (S/R) ratio of warfarin concentrations ranged from 0.002 to 1.89, showing marked variability among the patients. Majority of patients were found to have enantiomeric (S/R) warfarin ratio of about (1/2) as shown in Figure 3.

Conclusion: A specific APG-HPLC–DAD analytical method for simultaneous determination of enantiomers of warfarin in human plasma has been developed and fully validated with satisfactory accuracy and adequate precision. The developed method was applied to determine warfarin enantiomers in patients’ on warfarin maintenance therapy. This developed and applied method may have the potential to be employed for routine simultaneous quantification of S- and R-warfarin in human plasma samples. 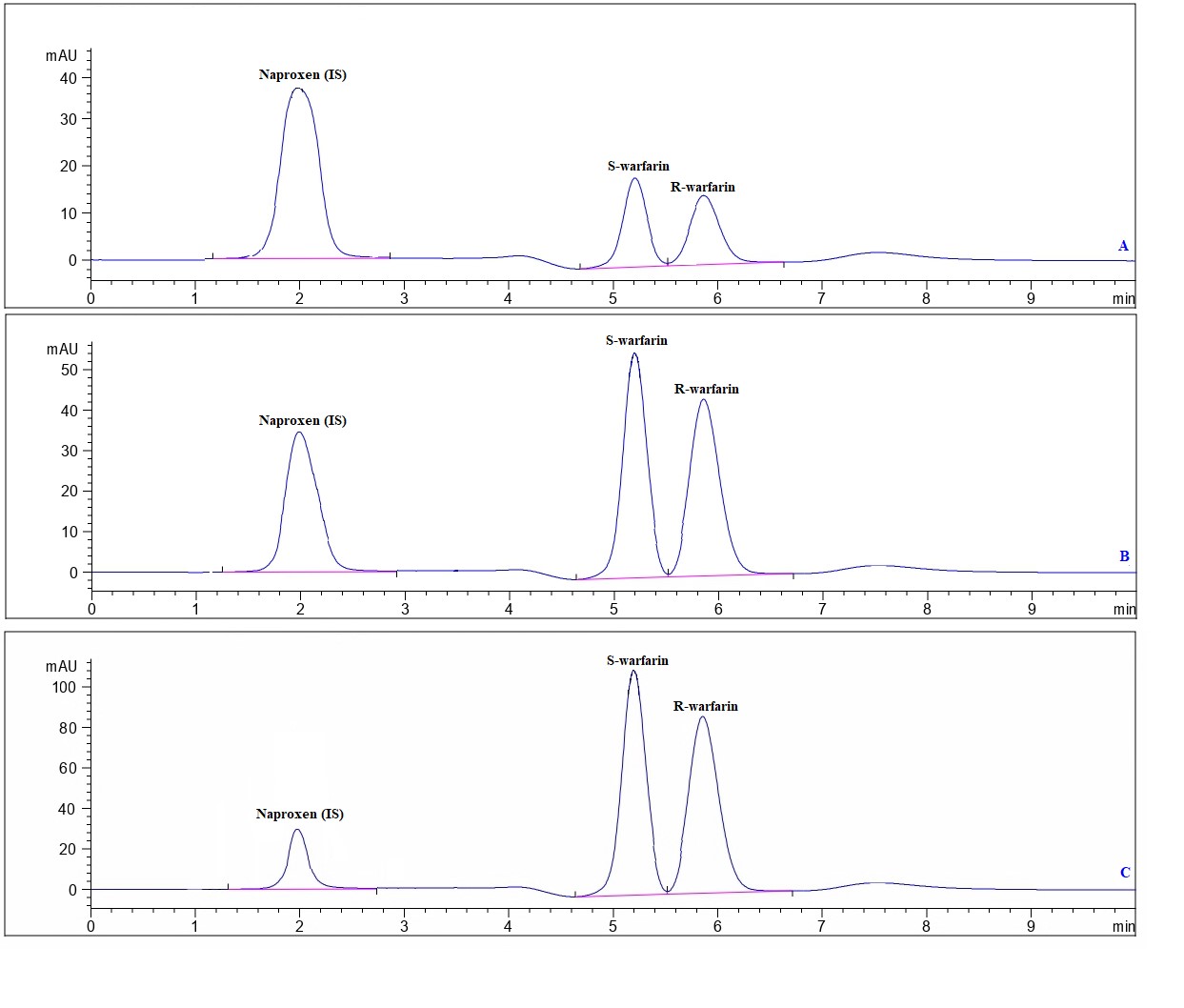