Purpose: In last three decades, no new class of antibiotics is discovered, and the existing antibiotics have started to lose their activity against different bacteria. The emergence and spread of resistance to current antibacterial agents is a major public health threat, and there is an urgent need to develop new strategies to address this issue. In this project we explored drug repurposing using chemical libraries of 2,578 compounds to discover novel antibacterial activities, primarily against Methicillin resistant Staphylococcus aureus (F-182) in a high throughput whole cell based screening approach. The two innovative dimensions of our effort are: (1) to identify antibacterial drug metabolites with improved activity post human liver microsomal metabolism, (2) to identify synergistic agents in presence of Cefoxitin, against which MRSA F-182 strain is resistant.

Methods: Two chemical libraries used in this project are FDA-approved drug library (978 compounds) and NCI Diversity Set V library (1600 compounds). The libraries were delivered in standard 96 well plates, to which were then added control antibiotics and control microsomal CYP substrates in the empty wells. The libraries were then replicated using a liquid handling workstation (Biomek 3000). To one copy of both FDA and NCI libraries was then added human liver microsome containing buffer to perform in vitro drug metabolism. Post metabolism, both libraries were extracted with DMSO and concentration was adjusted to 1 mM (PM Library). To another copy of both libraries were added DMSO to dilute and adjust the concentration at 1 mM (UM Library). UM and PM libraries were then screened against MRSA F-182 strain in presence and absence of Cefoxitin (8 µg/mL) (Figure 1). Activity was determined by measuring fluorescence of Resazurin dye using a multimode plate reader. Obtained multidimensional data were analyzed using MATLAB. Hits were identified and their minimum inhibitory concentrations (MICs) were determined using a liquid handling robot (Integra VIAFLO Assist). Drug metabolites with improved activity were identified using Liquid Chromatography and Mass Spectrometry (Thermo Scientific Orbitrap, Sciex QTrap 3200 coupled to Shimadzu UPLC). Synergistic agents were confirmed by checkerboard experiment by determining fractional inhibitory concentration (FIC) indices and isobolograms. Spectrum of activity of top hits and related compounds sharing the pyrimidine backbone in their structure were tested against 7 different MRSA strain, 1 E. coli (Seattle 1946)  and 1 Vancomycin resistant enterococcus (VRE, clinical) strain. Mechanistic study was performed using targeted metabolomics focusing on bacterial DNA biosynthesis pathway by quantifying different DNA nucleosides and nucleotides. Frequency of resistance (FoR) of the top hits were determined to evaluate the potential of the identified hits as antibacterial agents and to perform whole genome sequencing.

Results: We obtained a 22.5% and 11.8% increase in the number of hits post metabolism from the FDA and the NCI library screening, which indicated that in vitro drug metabolism increased the antibacterial hit rate. Several anticancer and antibacterial drugs showed improved activity post metabolism. We identified the active metabolites of Capecitabine as Deoxyfluorcytdine (DFCR) and Deoxyfluorouridine (DFUR) with a MIC of 3.1 and 1.6 µM respectively where their parent, Capecitabine was inactive at 400 µM1 (the highest concentration tested) (Figure 2). We found several drugs showing strong synergy with Cefoxitin against MRSA F-182. The checkerboard assay confirmed their synergy with a FIC index less than 0.5 and representative synergistic isobologram (Figure 3I). Active Capecitabine metabolites and a panel of other related compounds showed overall potent inhibitory activity against all MRSA strains tested with a MIC range of 0.049–3.1 µM except for Capecitabine and DFCR. Few of them showed activity against VRE, specially Gemcitabine and Carmofur with a MIC of 6.1E-3 and 6.3 µM, respectively. None of them were active against E. coli which was a gram negative bacterium. Targeted metabolomics study identified thymidylate synthase as the biochemical target of the Capecitabine metabolites, DFCR and DFUR based on cytoplasmic level of Deoxyuridine monophosphate and Thymidine monophosphate and their corresponding nucleosides Deoxyurdine and Thymidine (Figure 3II). Capecitabine metabolites, DFCR and DFUR showed the lowest frequency of resistance whereas Gemcitabine showed the highest frequency of resistance, although the FoR values for all the hits tested were below 4e-8 indicating their hypomutable nature. 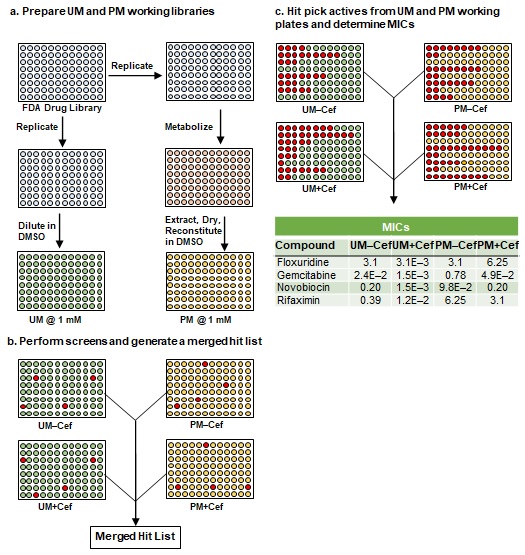 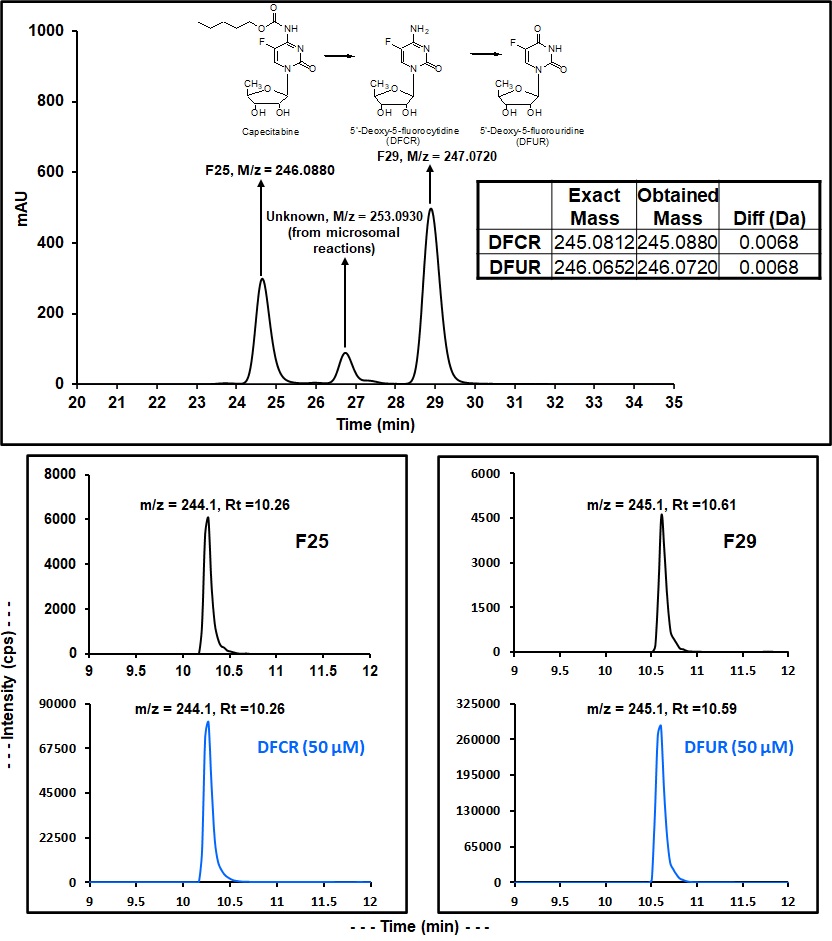 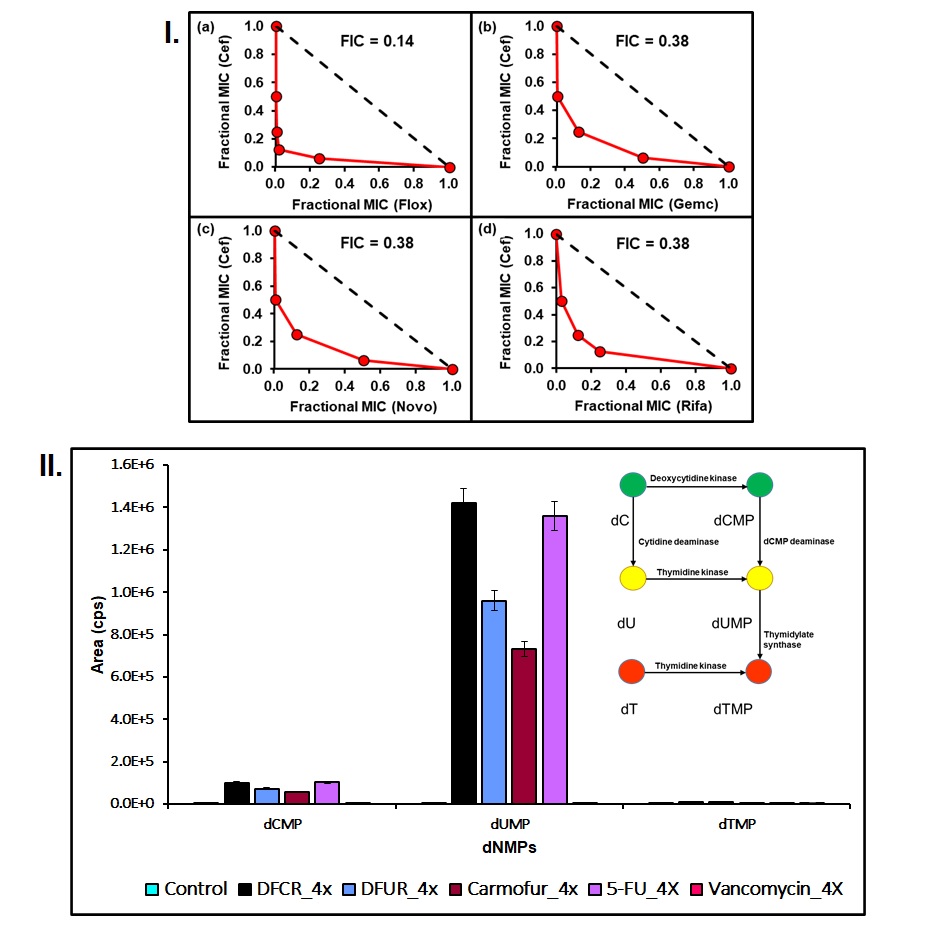