Purpose: Crystal mechanical properties play a central role in powder compaction. In accordance with the bonding area-bonding strength (BABS) model, adequate crystal plasticity is necessary to form a high bonding area (BA) between particles in a tablet through permanent plastic deformation. Crystal plasticity can be structurally attributed to anisotropic, directional interactions and unobstructed slip systems within a crystal structure. Plastically deforming crystals keep their deformed shape and maintain a large bonding area (BA) after compaction, which is highly beneficial for tablet formation. On the other hand, elastic crystals are expected to experience a large elastic recovery after compression, which would have a deleterious effect on tabletability due to a low conserved BA between adjacent particles. However, no systematic studies have been performed on the tableting properties of elastic crystals. In this work, the tableting properties of the 2-dimensionally elastic caffeine:4-chloro-3-nitrobenzoic acid methanol solvate (CCM), which exhibits exceptional single crystal elastic flexibility when bent, are evaluated to better understand how crystal elasticity influences tableting performance.

Methods: Preparation of CCM was performed by slurrying the two coformers in methanol, and was verified by powder X-ray diffractometry, differential scanning calorimetry, and polarized light microscopy. Tablets of CCM were made at varying compaction pressures ranging from 25 to 350 MPa using a universal material test machine. Tablet dimensions were measured, then tablet tensile strength was evaluated from the tablet breaking force using a texture analyzer following a standard procedure. Desolvation of the CCM powder was performed at 100 °C for 1 hour to obtain the anhydrous powder.

Results: Although elasticity is detrimental to tablet formation, the 2-dimensionally elastic CCM exhibited exceptionally good tabletability, even better than some of the best plastically deforming crystals, including 2D plastic caffeine hydrate (CAH) and the 1D plastic Schiff base of ortho-vanillin with 6-chloro-2,4-dinitroaniline cocrystal (sb-ovan:cda) (Figure 1). This surprising result indicates that a high BA must have been formed and conserved between particles in the compact, which requires significant plastic deformation. A low in-die elastic recovery was observed for CCM when compared with other commonly used excipients, indicating a highly conserved BA after decompression. Plasticity parameters extracted from in-die Heckel analyses and out-of-die Kuentz-Leuenberger and Sun approaches suggest high powder plasticity of CCM. Analysis of CCM bonding strength (BS), derived from compactibility plots, also revealed a moderate bonding strength.

The apparent dichotomy between exceptional single crystal elasticity in 3-point bending and high powder plasticity during compression can be explained by analyzing the difference in stress conditions in the two scenarios. In three-point bending, a small force is applied uniaxially. However, during compression, the crystals experience a large force with a pseudo-hydraulic stress condition, where stresses can be applied from nearly all directions. Plastic deformation can thus occur through activated slip planes that remain dormant during uniaxial 3-point bending. Analysis of the CCM energy framework identified the (010) plane and < 001 > direction as the active slip system responsible for the apparent high plasticity during compression. Thus, the exceptional tabletability of CCM is primarily driven by its high BA formed during compaction due to a high powder plasticity, which is decoupled from single crystal elasticity.

To further illustrate this point, compaction properties of this isostructural desolvated CCM (CCMd), which exhibits brittle fracture during 3-point bending, was tested. However, powder mechanical properties of CCMd remain comparable to those of CCM, which is consistent with their similar crystal structures. Hence, bulk powder compaction properties are inherently linked to crystal structure but are decoupled from deformation behavior during 3-point bending.

Conclusion: This work shows that elastic flexibility of single crystals during 3-point bending is a poor predictor of tableting behavior of powders due to inherent crystal anisotropy and difference in stress conditions. A reliable prediction of organic crystal tabletability requires a structural analysis of plasticity, decoupled from the qualitative 3-point bending assessment. 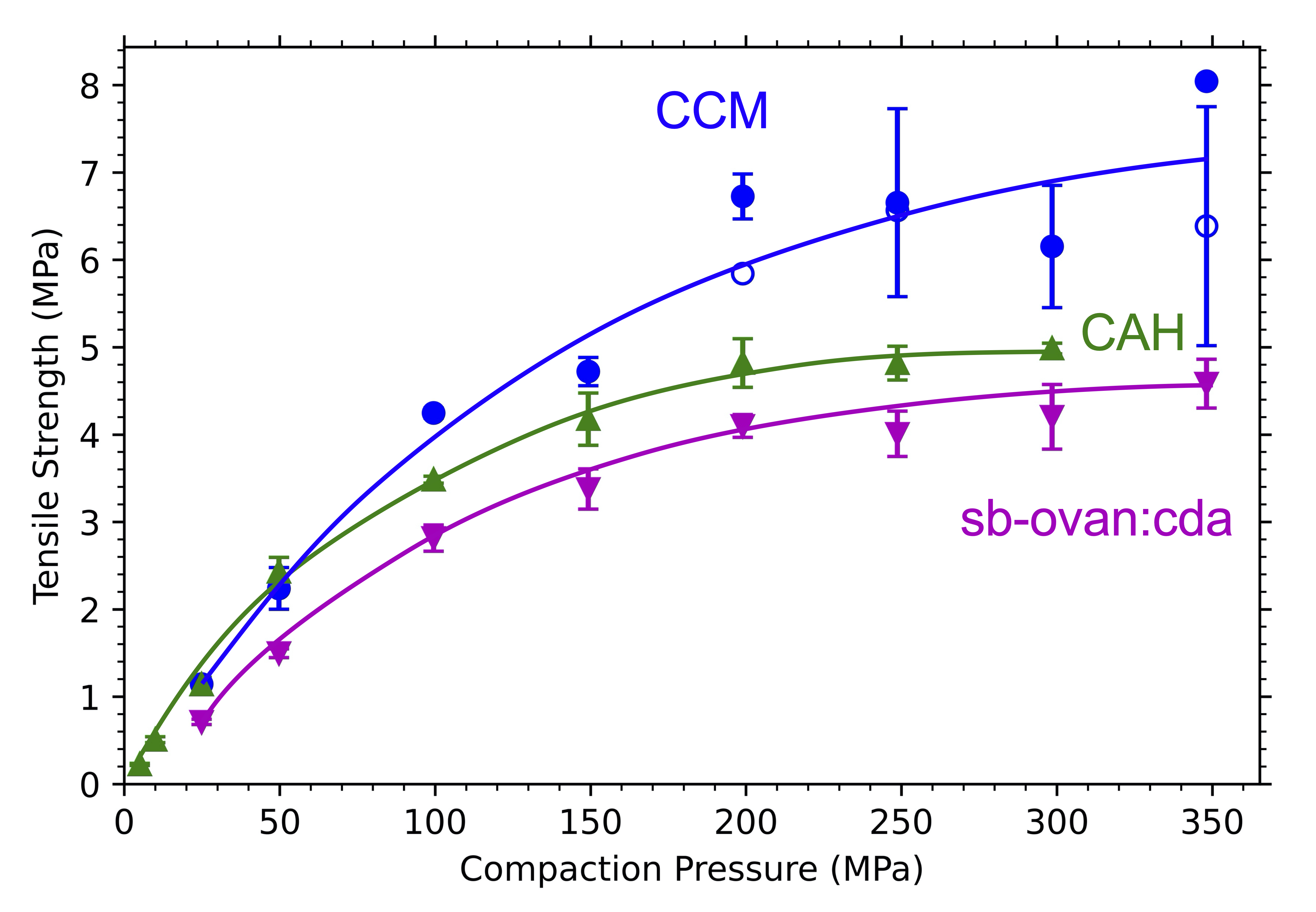