Purpose: Hot melt extrusion (HME) is one of the most promising technology for the creation of amorphous solid dispersions. During this process the active pharmaceutical ingredient (API) and the carrier polymer can be mixed or blended and are subsequently co-dispersed as a physical blend of the API carrier matrix with the aid of shear stress applied by the extruder. A combination of applied shear stress and temperature input generates the energy required to melt the polymer and embed the API. Due to the potential decay of the APIs a high stability of the targeted polymers is required. Especially free radical formation during the process can have a negative influence on API integrity as well as long term stability. Potential free radicals can form during the extrusion process itself and usually have a very low half-life. Therefore, it is important to have a suitable method to identify and characterize them. Electron paramagnetic resonance spectroscopy (EPR) is one of the promising technologies evaluated during this study. A suitable spin trap needs to be identified to enhance the resolution of signals.

Methods: In order to perform an initial screening of different polymers at small scale a vacuum compression molding device from MeltPrep GmbH was used. A schematic figure of the VCM process is presented in Figure 1. In the melting process, polymer round disks of 5 mm diameter and 2-3 mm height were produced. Pure polymers were evaluated as well as mixtures containing 10% of the respective spin trap, the heating profile was adopted to the individual sample. Polymer disks were cut into pieces to perfectly fit into the EPR-tubes. For EPR investigation the benchtop Bruker EMXnano was used. Quantification of free radical concentration was done by use of PBN (N-tert-Butyl-α-phenylnitrone) as spin trap and integration of the EPR signal. Extrusions were carried out with selected polymers using a lab-scale extruder Pharma 11 from ThermoFisher Scientific. The following polymers frequently used for HME applications were assessed during the evaluation: PVA, PVP,: PVP/VA Copolymer, PVA-PEG graft copolymer, PCL-PVAc-PEG graft copolymer, amino alkyl methacrylate copolymer, HPMC, HPMC AS.

Results: In an initial assessment it was observed that especially for amino alkyl methacrylate copolymer, HPMC, HPMC-AS high signals for polymer/spin trap samples were observed. An interaction with the spin trap PBN cannot be excluded for these samples. Therefore, these three polymers were not considered for further evaluation. The signal of the spin trapped species was successfully distinguished from spin trap decomposition by separate EPR-measurements of the spin trap. Differences in radical concentration were observed, roughly correlating with the structural complexity of the polymer (see Figure 2). Polyvinyl alcohol, a simple polymer with no complex sidechains or functional groups, showed the lowest relative radical concentration. Polyvinyl caprolactam-polyvinyl acetate-polyethylene glycol co-polymer in comparison showed a 7- fold increased signal. Two interesting polymer candidates were chosen for processing via hot melt extrusion. The qualitative statement observed via initial screening was reproduced.

Conclusion: Hot Melt Extrusion implies high thermal and mechanical stress to the polymers. This is an important factor to consider especially during the formulation of sensitive drug substances. Spin trapping of radicals during the extrusion process itself can provide new insights in the radical formation. Our first findings indicate that more radicals are generated in polymers with rather complex structures and multi-functional groups. Further experiments may also involve the use of different spin traps in order to validate these findings and may even allow a more defined characterization of the nature of the observed radicals. 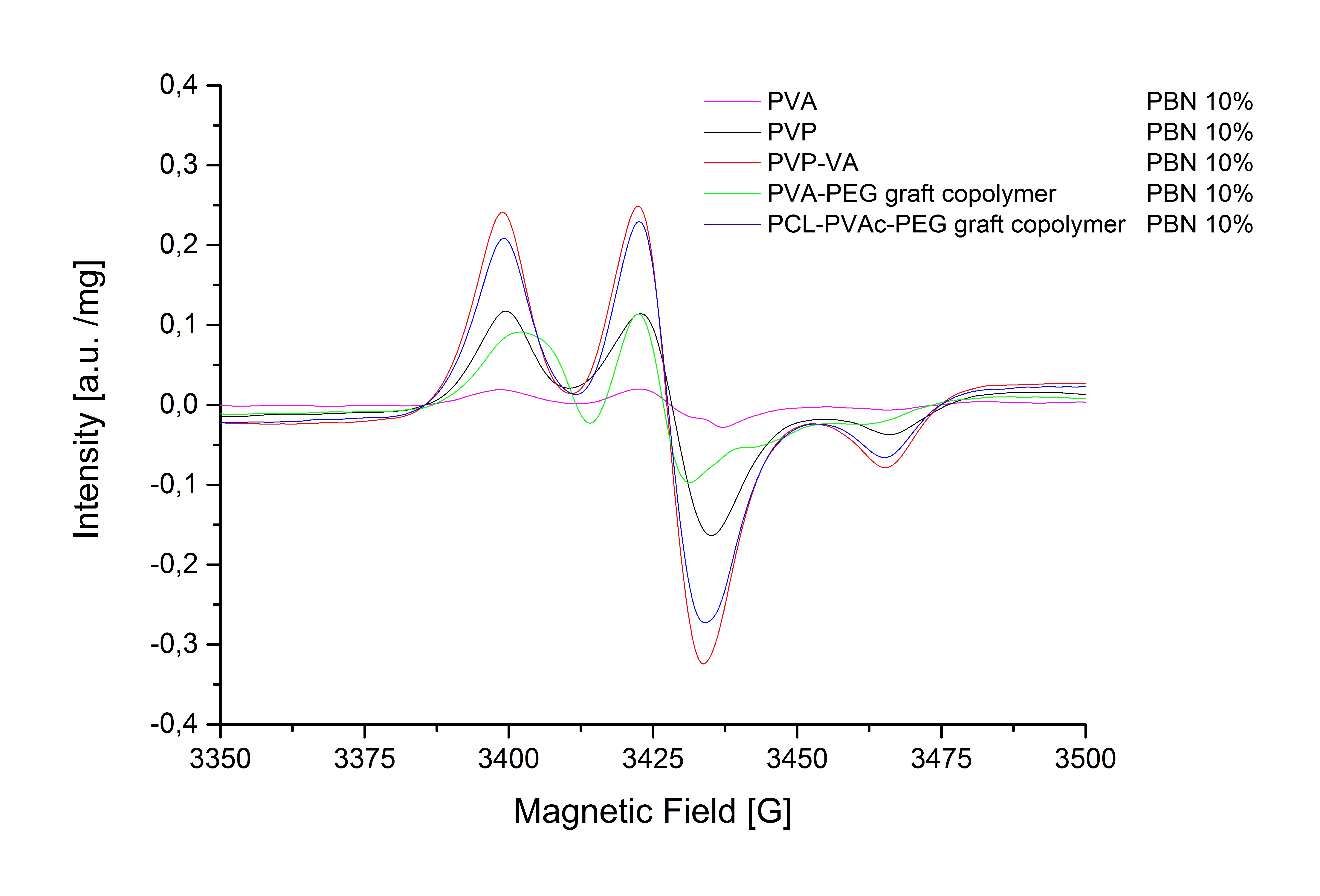