Continuous Manufacturing - How to Overcome Feeding Challenge of Magnesium Stearate

Purpose: The implementation of continuous manufacturing technology for solid applications brings up benefits as easy scale-up, consistent products, lower manufacturing costs and smaller footprint. However, dosing accuracy of minor components or badly flowing components – either API or excipients - is technically a key challenge. To overcome this hurdle, the pragmatic approach is evaluated using a pre-mix of mannitol and magnesium stearate for continuous direct compression. In the current study, the powder properties of the pre-mix are analyzed with respect to flowability and feeding. The tableting performance of this premix and in presence of model drugs is then evaluated and compared to the standard mixture with magnesium stearate added last. Finally, the suitability of the pre-mix approach is tested on a continuous line.

Methods: A spray-granulated mannitol grade (MilliporeSigma, Darmstadt, Germany) was used as binder, magnesium stearate (MST) (MilliporeSigma, Darmstadt, Germany) as lubricant and Propranolol*HCl (Selectchemie, Jiangsu, China) was one model drug. The mixtures were prepared by mixing mannitol and MST (2 % w/w) or API (10 % w/w) for 5 min at 47 rpm using a Turbula® (T2A, (Willy A. Bachofen AG-Maschinenfabrik, Muttenz, Schweiz). The third component (API or MST) was added and mixed again for 5 min, 47 rpm. The whole in one mixture was prepared by weighing the components and mixing for 5 min, 47 rpm. MST was always sieved using a 250 µm sieve. The mixtures were compressed with a single punch press (EKO, Korsch, Berlin, Germany) equipped with strain gauges to detect the ejection force. For tablet characterization a Multicheck (Erweka, Langen, Germany) was used. Dissolution tests were run using a Sotax AT Extend (Sotax, Aesch, Switzerland).

Results: The analysis of the powder properties demonstrates a very good flowability of the pre-mix (data not shown). As expected, it is comparably good to the pure mannitol filler, the addition of MST does not significantly affect the flow performance. The good flow behavior correlates with adequate feeding of the premix in the continuous line (data not shown). The performance of the pre-mix in a tableting process is shown in presence of Propranolol (Fig. 1). Overall, the detected ejection forces are acceptable. The ejection force for the pre-mix where Propranolol is added last is slightly higher for 5 and 10 kN compaction force and higher at 20 and 30 kN. The suitability of the pre-mix is also demonstrated with other model drugs (Ibuprofen, Ascorbic acid) showing comparable or even lower ejection forces for the pre-mix (data not shown). For all tested model formulations, the tablet hardness is comparable and not affected by the mixing order (Fig. 1 below). Furthermore, the dissolution performance is similar for all mixtures, the mixing sequence does not impact the API release (Fig. 2). 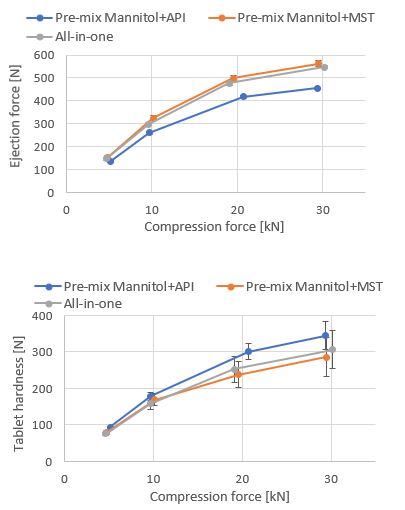