Purpose: Arguably the primary early development goal for a new chemical entity (NCE) is to demonstrate proof-of-concept (POC) in a patient population in the most time and cost-effective way possible. The drug product strategy is crucial to success. The general philosophy over the last decade for first-in-human (FIH) studies has been to “keep it simple”, with the use of rudimentary, pharmacy-prepared, fit-for-purpose formulations such as drugs and powders in bottle and capsules. The intended benefit of this strategy is to minimize upfront development time and CMC expenditure prior to generating clinical safety and pharmacokinetics (PK) data, to warrant further investment in the asset.

Given the prevalence of NCEs with challenging solubility and biopharmaceutic properties this approach presents limitations, especially where enabling formulation technologies are required to ensure adequate bioavailability.  Not only does this presents risks given the reliance on surrogate tools to predict human exposure, such as nonclinical, in vitro or in silico data, but also a high probability of needing a subsequent bridging transition to a suitable (solid) dosage form prior to the patient POC trial.

Here we describe how the integration of compounding, formulation development and GMP manufacturing activities within the FIH to POC program can streamline the development plan whilst maximizing the potential for clinical success. A general program design framework is proposed in Figure 1, describing how (i) FIH programs can be rapidly initiated via compounding of simple formulations where appropriate, or enabled GMP intermediates where necessary, (ii) multiple technologies can be screened within a FIH protocol to identify the simplest formulation type which gives the desired bioavailability/PK, and (iii) switches to solid dosage forms can be bridged during the single (SAD) and multiple (MAD) ascending dose stages of the protocol without affecting the critical path, thereby allowing an immediate supply of GMP clinical trial material into patient-based POC trials. Two case studies are presented.

Methods: Integrated early drug development programs were designed for two molecules, based on their physicochemical and biopharmaceutic properties.  In both programs, drugs products were prepared either by pharmacy compounding of the NCEs, compounding of GMP intermediates, or the GMP manufacture of finished drug products.  All formulations were prepared in real-time during the FIH clinical study, using arising safety and PK data to inform the drug product choice for the next study period as part of an adaptive protocol.

Case study 1: Compound 1 (Cmp-1), a predicted DCS Class IIb molecule, was administered in a FIH study using a crystalline suspension formulation prepared via pharmacy compounding for the single ascending dose (SAD) assessment.  In parallel multiple enabled solid dose formulations (lipidic capsules, two spray-dried dispersion (SDD) tablets) were developed, manufactured under GMP and rapidly screened in a concomitant relative bioavailability study, using the suspension formulation as a control, prior to selecting the lead prototype for use in the multiple ascending dose (MAD) part of the FIH protocol.

Case study 2: Compound 2 (Cmp-2), a predicted DCS Class IIb/IV drug, was administered in a SAD study as both a micronized powder in capsule formulation and a lipidic suspension.  Based on the emerging clinical PK data, dose escalation was completed with the lead formulation.  In parallel an optimized version of the lead formulation was developed to increase unit dose and refine excipient levels for rapid scale-up, which was tested in an optional part of the SAD protocol.

Results: Case study 1: A lipidic capsule formulation demonstrated superior clinical PK performance to SDD formulations for Cmp-1, and was used for the MAD assessment upon immediate conclusion of the SAD phase. The integrated program design was estimated to have saved over 8 months of R&D time in comparison to performing a separate critical-path solid dose development and bridging study post FIH and prior to POC.

Case study 2: Based on the clinical PK data a micronized powder-in-capsule formulation was selected during the SAD study as the preferred formulation technology. An optimized formulation was identified and successfully bridged also within the SAD protocol prior to immediate manufacture for the patient POC study. Overall program duration was 12 months.

Conclusion: The majority of NCEs entering development have sub-optimal solubility, presenting challenges to development teams as they try to control CMC investments whilst shortening time to POC.  Integration of flexible compounding and GMP manufacturing within the FIH-to-POC program has been shown to offer significant benefits in achieving these objectives. The ability to manufacture and dose multiple formulations types “real-time”, using human data to inform decisions, coupled with the ability to use smaller batch sizes and abbreviated data packages ensures CMC spend can be appropriately managed. A road-map has been proposed to inform formulation transitions with FIH studies to enable a seamless progression into patient POC trials. Drug development programs using this approach have been shown to save, on average, 15 months of time when compared to traditional practices. 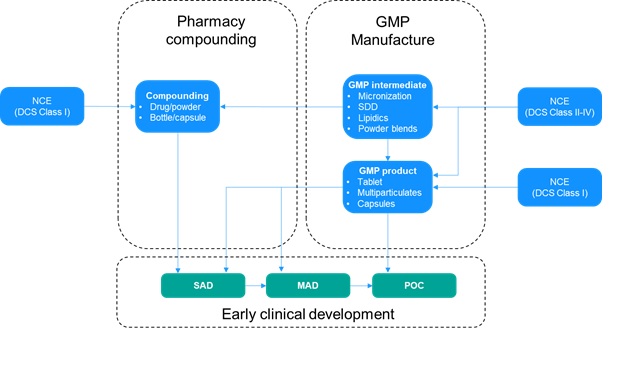