Purpose: Abiraterone acetate is a poorly water soluble prodrug used in treatment of prostate cancer. In our previous study, we developed amorphous solid dispersions of active metabolite Abiraterone with polymers and oligomer, using solvent free KinetiSol® technology. We found that hydroxypropyl β cyclodextrin (HPBCD) based KinetiSol® processed solid dispersions (KSD) surpassed polymer based KSDs in terms of bioavailability enhancement of Abiraterone. The purpose of this study was to develop abiraterone-HPBCD (see Figure 1) KSDs with different drug loading (DL) and investigate the solid state properties along with the interaction between abiraterone-HPBCD within these KSDs.

Conclusion: From this study, it could be concluded that inclusion complexes of  drug-cyclodextrin were developed within the abiraterone KSDs. And 10% w/w DL was optimal for complete complexation of abiraterone within HPBCD. 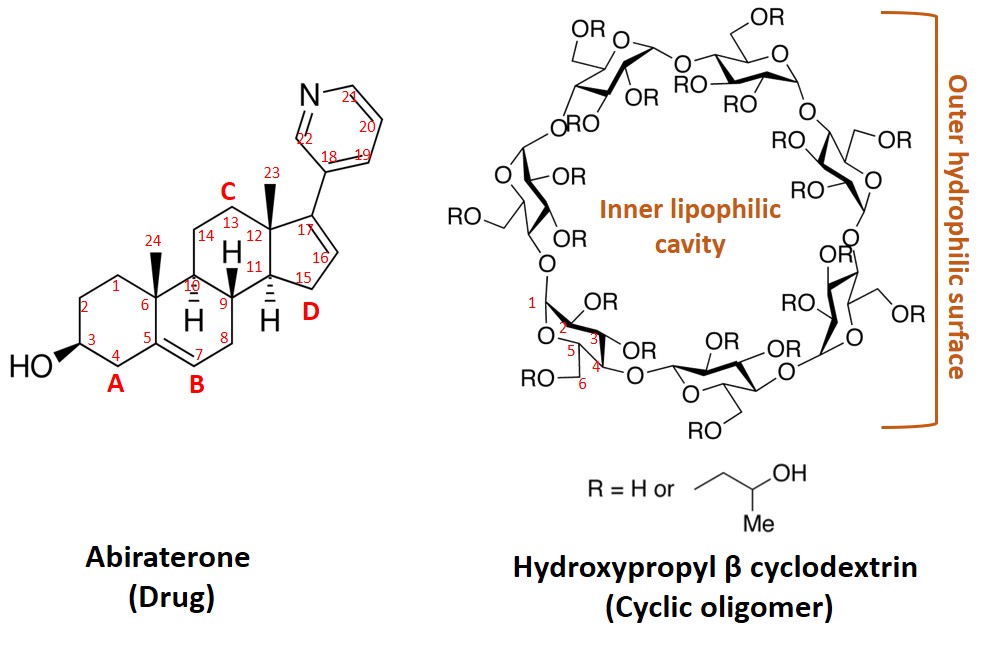 References: Gala, U.; Miller, D.; Williams, R.O., III. Improved Dissolution and Pharmacokinetics of Abiraterone through KinetiSol® Enabled Amorphous Solid Dispersions. Pharmaceutics 2020, 12, 357.
Acknowledgement and Disclosure: Gala, Miller, Spangenberg and Williams are coinventors of the intellectual property related to this work. Williams acknowledges financial support for Gala from DisperSol Technologies, LLC. The research presented herein is a part of Gala’s dissertation- ‘Improved Prostate Cancer Therapeutics through KinetiSol® Enabled Amorphous Solid Dispersions of Abiraterone’, The University of Texas at Austin, 2019 and will be published as a part of research article in future.