Purpose: Alzheimer’s disease (AD) is a progressive brain disorder that is characterized by cognitive decline and metabolic dysfunction. Research has demonstrated that peripheral insulin resistance along with brain insulin resistance increases the risk for AD. Increased peripheral insulin levels promote insulin transport to the brain across the blood-brain-barrier, facilitating pivotal neuronal functions in the CNS. However, insulin resistance in the brain impairs insulin delivery and signaling. Literature evidence demonstrates the pivotal role of lipid rafts in insulin receptor functioning and signal transduction. The impact of lipid raft composition at the BBB on insulin transport across the BBB and moreover, the downstream effects on the insulin signaling pathway are poorly understood. We hypothesize that the delivery of lipid nanoparticles (LNP) containing unsaturated/saturated lipids can improve membrane lipid composition and correct the aberrant signaling/trafficking of insulin.

Results: The size of the nanoparticles were around 150 nm and the zeta potential was around 60 mV. Cellular uptake of SNPs formulated with 7:1(w/w) DOTAP: DPPC and ONP  formulated with 3:1 (w/w) DOTAP: DPPC demonstrated the best nanoparticle uptake by hCMEC/D3 monolayers. Dose-dependent increase in insulin uptake was found in cell monolayers exposed to SNPs but the ONPs did not show a significant effect on insulin uptake. Western blot densitometry analysis demonstrated that incubation with 60 µg/mL SNPs significantly increased the phosphorylation of AKT in hCMEC/D3 monolayers, whereas ONPs had no impact on the AKT phosphorylation.

Conclusion: Soybean oil, which contains a larger proportion of unsaturated fatty acids, when delivered as a nanoformulation has the potential to rectify insulin signaling/trafficking at the BBB endothelium. 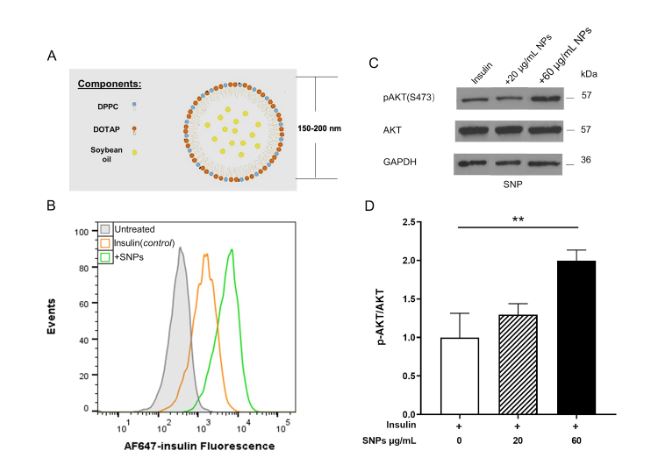