Purpose: Ranitidine HCl has been widely used as a prescription and over the counter medicine for the treatment of stomach and intestinal ulcer, gastroesophageal reflux disease (GERD) and erosive esophagitis. It has been reported that the stability of ranitidine HCl is significantly affected by elevated humidity and temperature. Recently, the FDA advised pharmaceutical companies to recall ranitidine HCl formulations from the market over concern of the presence of N-nitrosodimethylamine (NDMA) impurity. This recall presents an opportunity for pharmaceutical companies to reformulate ranitidine HCl core using excipients to help to improve the stability of the drug. It has been shown that partially pregelatinized maize starch (Starch 1500®) has moisture scavenging properties and its inclusion within the formulation may enhance drug stability1. Hence, the purpose of this study was to investigate the influence of Starch 1500 on the stability of ranitidine HCl, a moisture sensitive drug. The stability of coated ranitidine HCl tablets, containing Starch 1500 was evaluated in comparison to a marketed product. Ranitidine HCl tablet samples were dispensed into a pill organizer (also known as multidose compliance aid) and exposed to 40oC/75% RH storage conditions for 14 days. Tablets were tested for drug assay and impurities each day for one week and then at 14 days.

Methods: Two alternative formulations were developed using ranitidine HCl and MCC, with and without Starch 1500 together with colloidal silicon dioxide and magnesium stearate. Powders were blended in a twin shell blender for 10 mins followed by lubrication with magnesium stearate for 3 mins. The blends were compressed to a target tablet weight of 311 mg with a drug dose of 150 mg ranitidine HCl, then coated with a moisture barrier coating (Opadry® amb II). A marketed ranitidine HCl (150 mg) tablet consisting of drug and microcrystalline cellulose (MCC), as per the drug label information, was also purchased from a pharmacy store. The two ranitidine HCl tablet test formulations and the marketed product were stored in a pill organizer at 40oC/75% RH conditions. Samples were pulled every day for 7 days and then at 14 days of storage.  The samples were analyzed for ranitidine assay and impurities using liquid chromatography.

Results: Tablet formulations, with and without Starch 1500, produced low friability tablets. The inclusion of Starch 1500 led to lower tablet ejection force and low disintegration time. Coated tablets in the pill organizer exposed to the open dish 40oC/75% RH conditions led to coating rupture within 4-6 hrs for the marketed product and within 24 hrs for the two developmental formulations. The color of the core composition changed from white to brown after 4 days and progressively worsen during the remainder of the study. Figures 1 and 2 display the reduction of drug content and the growth of total impurities of the samples, respectively. The loss of drug was less for the formulation containing Starch 1500 with 85% w/w of drug remaining after 14 days of storage, while the formulation without Starch 1500 contained 60% w/w of the drug and the marketed product contained 59% w/w of the drug. The rate of degradation followed the sigmoidal shape; hence,  the drug assay remained constant for the first 4 days. After the initial appearance of impurities, the degradation rate appeared to increase. The level of impurities in the Starch 1500 containing formulation was significantly lower (12% w/w).

Conclusion: Ranitidine HCl tablet formulations using MCC, with and without the inclusion of Starch 1500 as fillers were investigated for drug stability when dispensed in a pill organizer at 40oC /75% RH. Inclusion of Starch 1500, a partially pregelatinized starch, within the core formulation reduced the rate of degradation of ranitidine and lead to lower levels of total impurities. The enhanced stability of ranitidine HCl tablets is attributed to the moisture scavenging property of Starch 1500  that reduced drug hydrolysis and degradation. 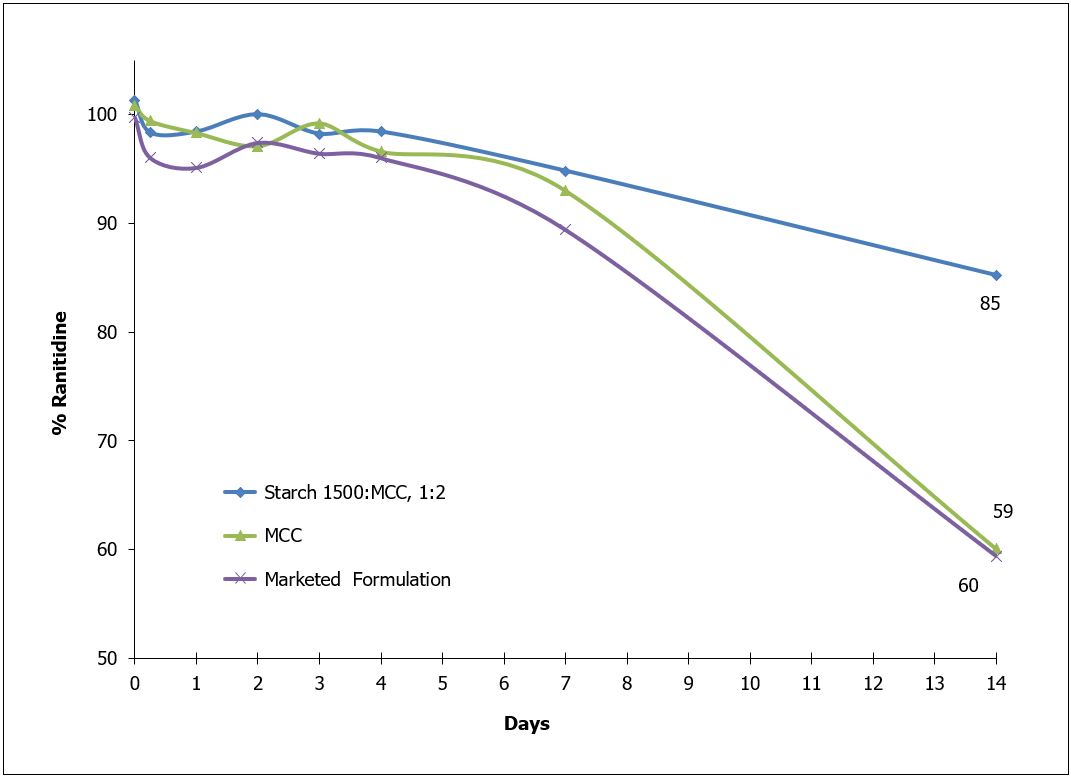 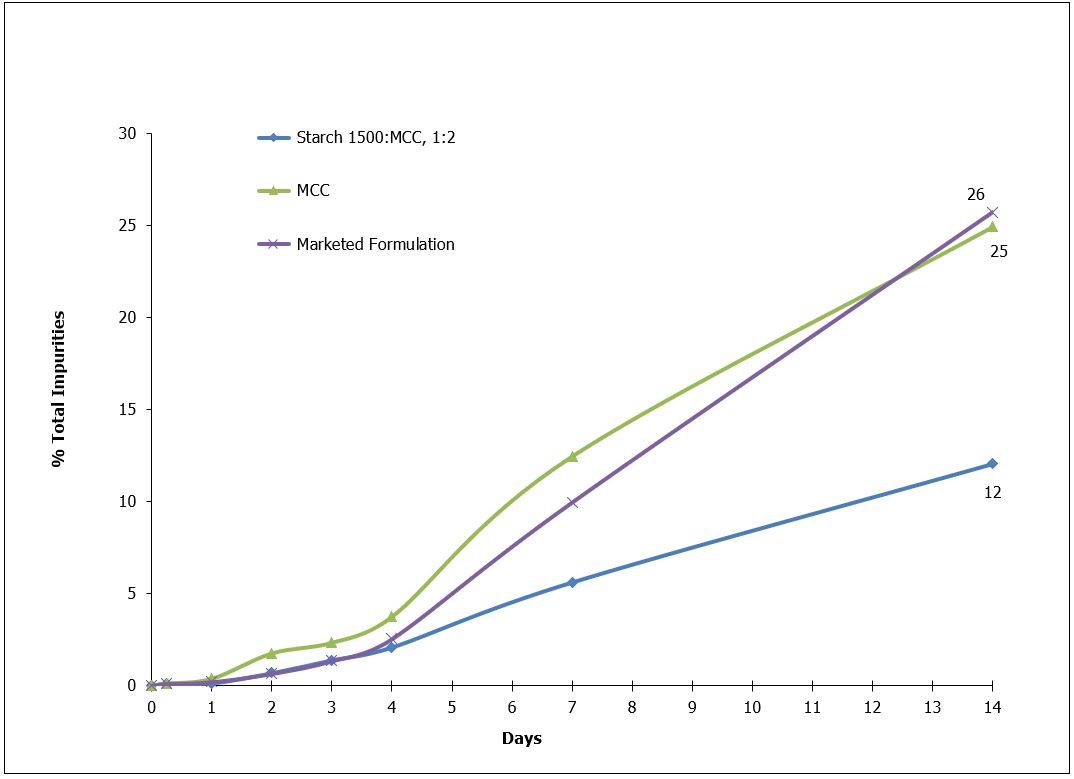