Purpose: Death from accidental or intentional overdose of sleeping tablets have increased exponentially in the USA. Around 70 million of the American population is affected by sleep problems. Due to the side effects associated with benzodiazepines, “Z-drugs” like zolpidem have become more popular. However, Z-drugs at higher doses has a potential for abuse due to its euphoric effect. Furthermore, simultaneous consumption of sleeping tablets with alcoholic beverages not only intensifies the effect of sleeping tablets, but also leads to suppression of the respiratory system, blackouts, sleep walking and death in many cases. Thus, we proposed a unique and innovative technology develop an Overdose and Alcohol Sensitive Immediate Release Sleeping tablet (OASIS) for deterring accidental overdose or abuse related use of sleeping tablets. Metoprolol tartrate and Hydrochlorothiazide were used as model drugs in place of zolpidem tartrate (Agonist) and flumazenil (Antagonist), respectively. We hypothesize that an appropriate use of Eudragit® polymer’s chemistry could be helpful in designing a tablet to prevent release of agonist in case of overdose and simultaneous release of antagonist when consumed with alcohol (Fig. 1).

Methods: Agonist and antagonist loaded Eudragit® polymers were prepared using hot melt extrusion (Process 11, ThermoScientific, MA). Effect of drug loading and polymer ratio was optimized. Solid state characterization of pure components, physical mixture, crushed filaments were performed using DSC, XRPD and TGA. Screening of various alkalizing agent was carried out by determining the amount of alkalizing agent and time required to raise pH above 5, by titrating it against Fasted state simulated gastric fluid (FaSSGF). Crushed filaments were converted into a tablet with addition of an alkalizing agent, binder and a superdisintegrant using single punch Carvar press. The tablets were characterized for hardness, friability, disintegration time. In vitro dissolution studies of single tablet and multiple tablets (5 tablets in dissolution jar) in 250 mL each of FaSSGF, FaSSGF+20% alcohol using USP dissolution apparatus 2 was carried out. Lastly, effect of commonly used alcoholic beverages on release of antagonist was performed by addition of milled filaments (loaded with antagonist) to tubes each containing 50 ml of laboratory alcohol, vodka, rum and whiskey diluted with FaSSGF. 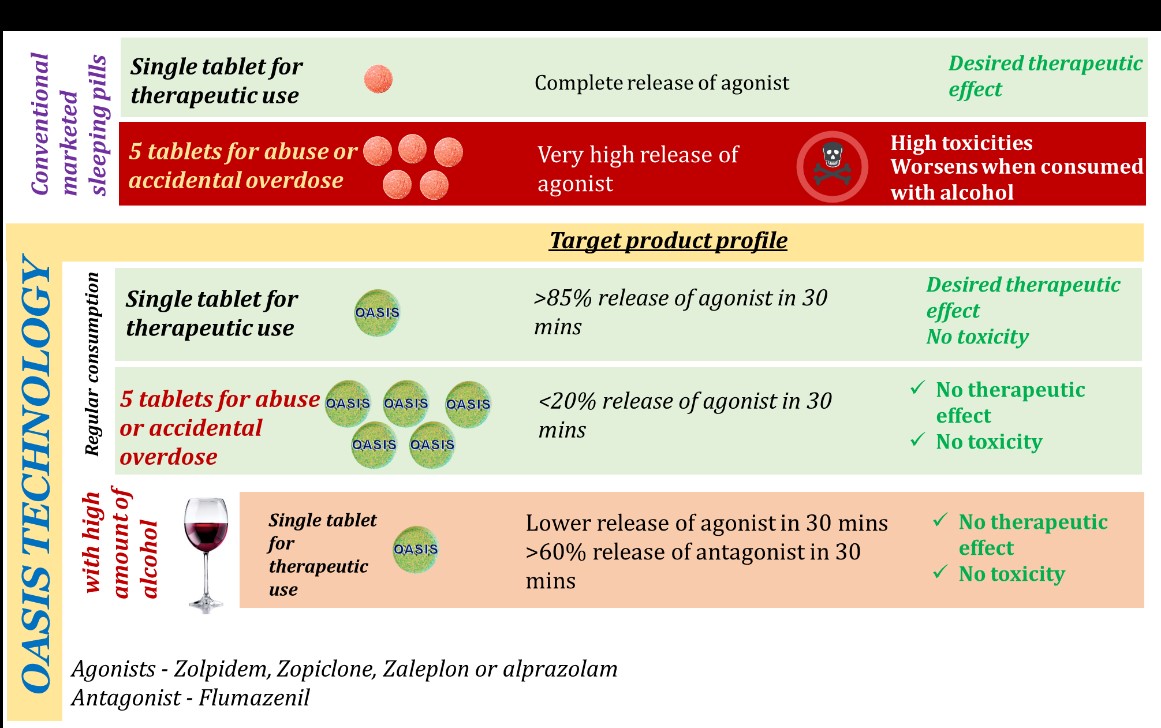 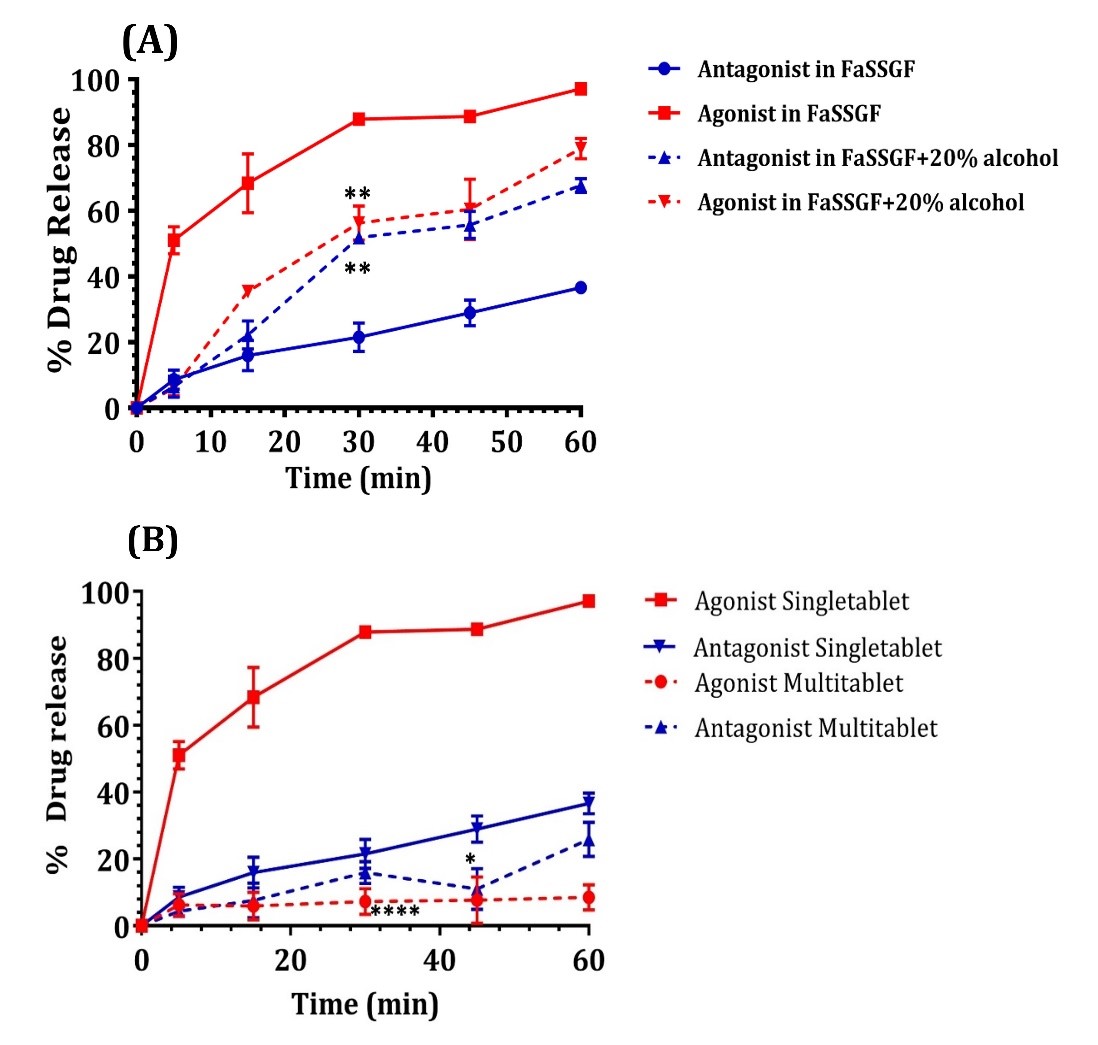 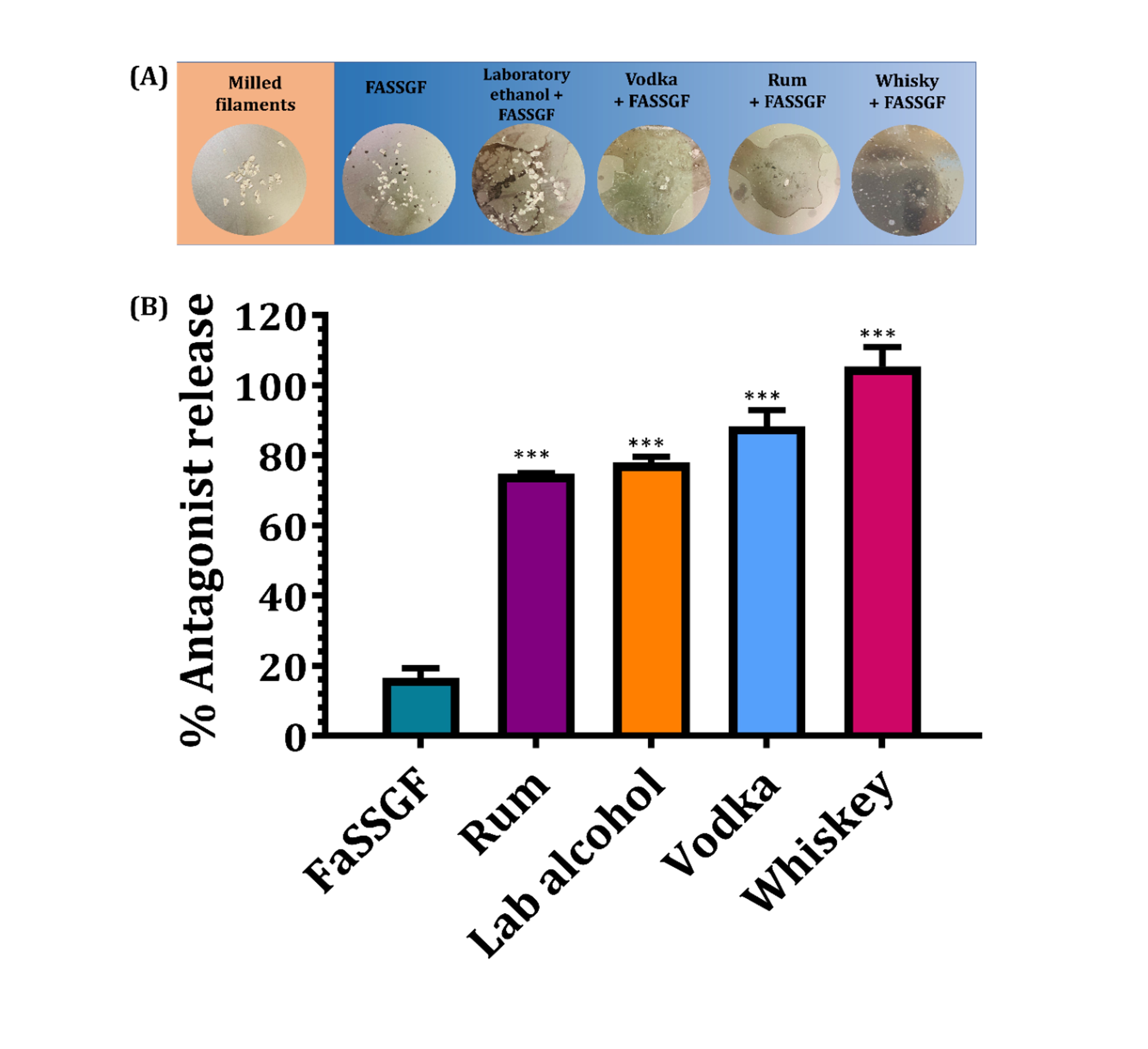