Purpose: Therapeutic management of high blood pressure has often centered on the use of agents that focus on peripheral mechanisms such as blood electrolyte (sodium/calcium), volume, and renin-angiotensin system regulation. Hardly ever, a drug therapy focused on hypertension driven by the sympathetic nervous system i.e., neurogenic essential hypertension. Failure to achieve blood pressure control in patients with neurogenic essential hypertension with the conventional antihypertensives (even at the limit additive combination) suggest the need for treatment directed at the underlining mechanism. Angiotensin II type 1 receptor activity is known to influence sympathetic pathways through circumventricular organs and paraventricular nuclei, leading to neurogenic hypertension. Angiotensin II, a centrally acting neuropeptide, functions mostly as a peripheral effector peptide of the renin-angiotensin system. It has been suggested that regulation of Angiotensin II and its receptor functionality with receptor antagonist drugs such as losartan is a potentially successful route for the management of neurogenic hypertension. This is augmented by knowledge that surgical procedures that denervate the Angiotensin II pathway can improve blood pressure control. However, information on the ability of losartan to cross the blood-brain barrier is contradictory. Owing to variant successes achieved with surgical procedures and expensive drug combination therapies, we hypothesize that targeted delivery of losartan via dual functionalized liposomes across the blood-brain barrier will reverse neurogenic essential hypertension. Our long-term aim of this study is to develop a therapeutic tool to treat neurogenic hypertension.

Methods: Losartan potassium at a dose of 3mg/kg (i.v. via tail vein injection) was administered to Sprague Dawley rats to determine its ability to cross the blood-brain barrier (BBB). Blood, cerebrospinal fluid (CSF), and organs were harvested at different time points (30 min, 1 hour, and 2 hours) and studied for biodistribution of losartan. HPLC method from the USP was adapted with slight modification (Mobile phase: Phosphate buffer pH 3: Acetonitrile (6:4), flow rate 0.9 mL/min, C-18 column) for quantitative assessment of losartan in various tissues. Dual functionalized liposomes were prepared using the thin film hydration technique. Briefly, Losartan, DOTAP, DOPE, cholesterol, and DSPE-PEG (2000)-Pen (45:45:2:4 mole % respectively) were dissolved in chloroform: methanol (2:1; v/v) and the solvent was evaporated to form a thin lipid film. The penetratin conjugated liposomes were prepared by hydrating the dried lipid film with HEPES buffered saline at pH 7.4. DSPE-PEG (2000)-Tf was added and stirred overnight at room temperature to form Tf-Pen-conjugated liposomes. Free DSPE-PEG (2000)-Tf was removed by passing through the Sephadex G-100 column. The rhodamine-labeled liposomes were formed by adding lissamine rhodamine PE to the organic solution of lipid prior to solvent evaporation. The encapsulation efficiency and drug loading were determined using the HPLC method. The stability of liposomes was monitored at 37°C for 14 days. In-vitro cellular uptake of rhodamine-labeled losartan liposomes was determined in Bend-3 cells after 2 hours, following exposure of cells to 200µM of lipid. Qualitative analysis was performed by the addition of Hoechst to stain the nuclei and observed under fluorescent microscopy, while a quantitative assessment was achieved with HPLC analysis of losartan as described previously. For the quantitative assay losartan was extracted with methanol from the cell lysate.

Results: Our preliminary data showed that losartan potassium administered at 3 mg/kg i.v. injection did not cross the BBB as indicated by the absence of losartan peak in the chromatograms of the brain and CSF samples. Losartan concentration in the liver decreased over time, while increased in the spleen and kidney. The highest level of losartan was observed in the heart among all the tissues tested. The optimized dual functionalized losartan liposomes had a particle size of 143.1 ± 4.7 nm with a polydispersity index of 0.285 ±  0.051. The zeta potential was 40.4 ± 3.93 mV. The entrapment efficiency of losartan in the dual functionalized liposomes was 66.8 ± 1.445%. Following a 14-day observation, the size of the liposomes did not significantly deviate from the mean size and thus was considered stable. Cellular uptake in bEnd.3 cells showed that dual functionalized liposomes had superior uptake profile compared to unencapsulated losartan, monofunctionalized, and plain liposomes.

Conclusion: Losartan potassium, a clinically used angiotensin II type 1 receptor blocker, does not readily cross the BBB. In this study, liposomes with small particle size and low polydispersity index were formulated that can encapsulate a high amount of losartan. Moreover, liposomal formulations remained stable for 14 days when stored at 37°C temperature, indicating their excellent storage stability. The dual-functionalized liposomes were capable of internalization at a higher rate and extent as compared to free losartan, plain liposomes, or monofunctionalized liposomes. Our future goal is to evaluate the potential of dual-functionalized liposomes to enhance losartan biodistribution in the brain for effective management of neurogenic hypertension. 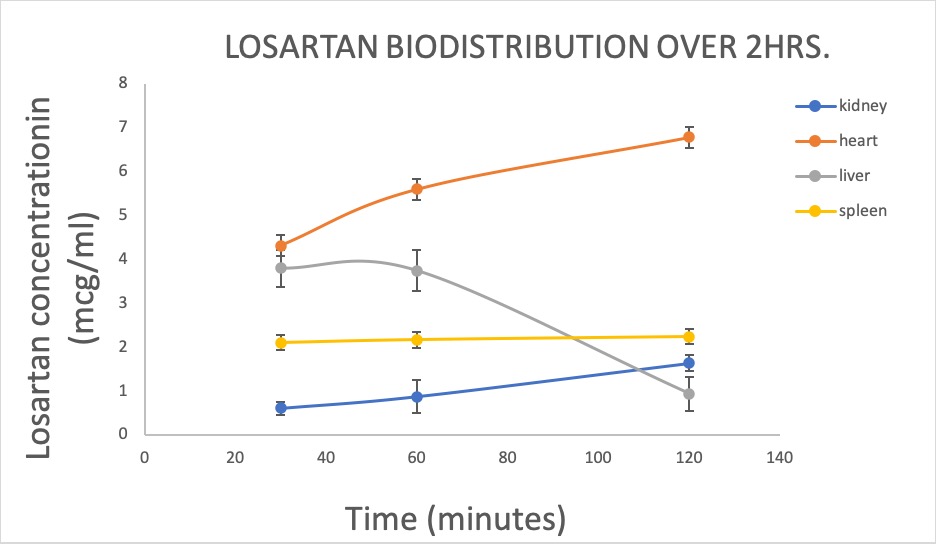 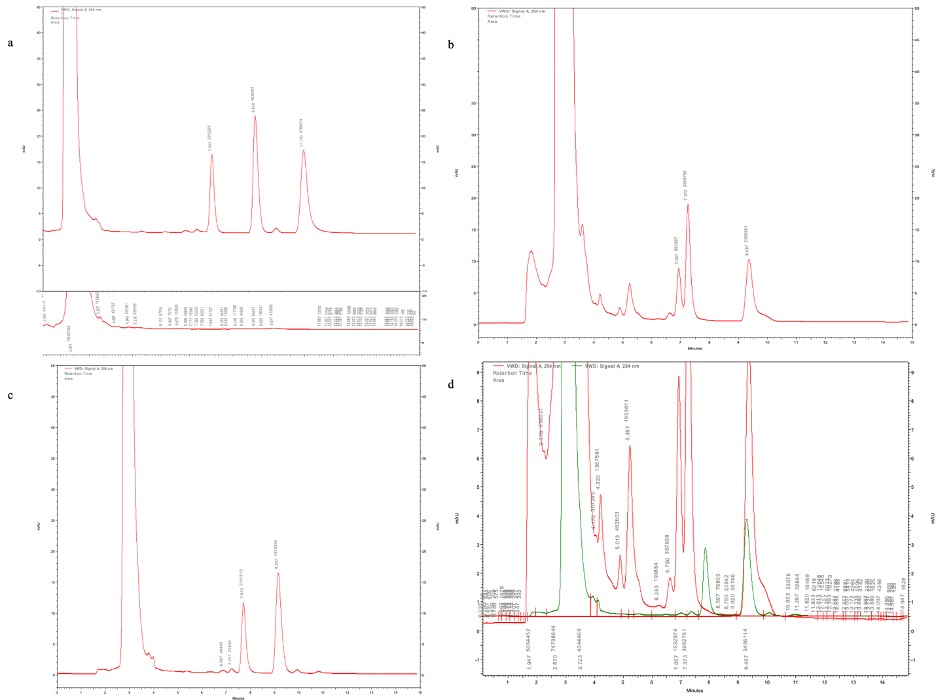 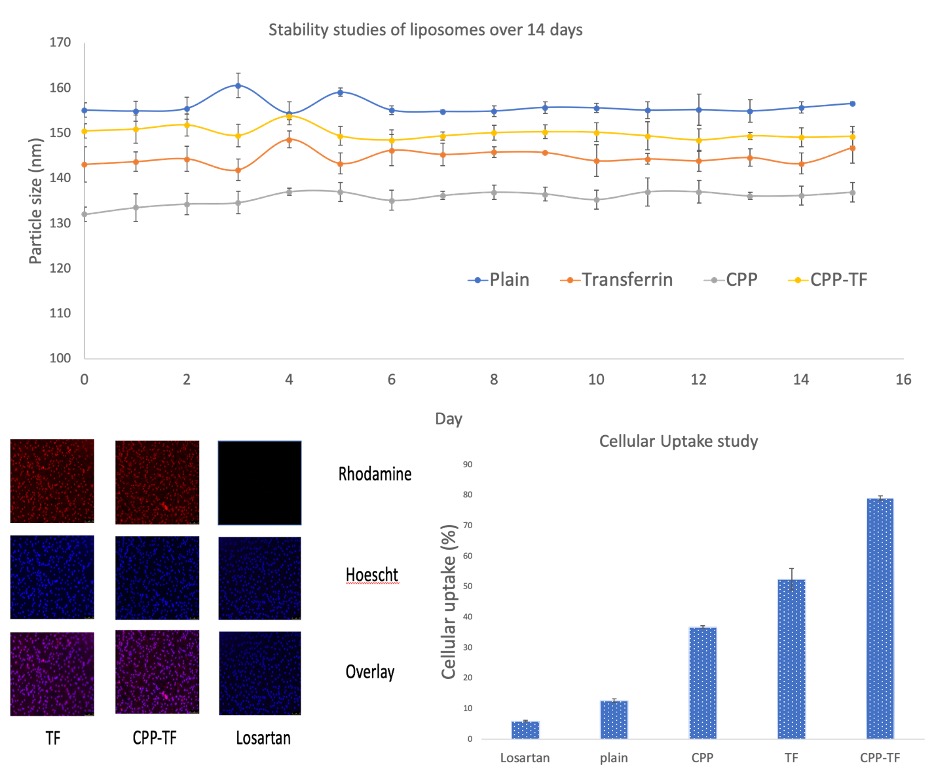