Pharmacology, Immunogenicity, and Safety of PF-06881894, a Proposed Biosimilar to Pegfilgrastim, Versus US- and EU-Approved Pegfilgrastim Reference Products (Neulasta®) in Healthy Volunteers

Purpose: PF-06881894 is a proposed biosimilar to pegfilgrastim reference product (Neulasta®; Amgen, Thousand Oaks, CA). Two studies (C1221001 and C1221005) were conducted to assess PF‑06881894, and US-licensed and EU-approved pegfilgrastim reference products, to determine whether there were any clinically meaningful differences among them regarding pharmacodynamics (PD), pharmacokinetics (PK), immunogenicity, and safety.

Methods: Healthy male or female volunteers aged 18–65 years were randomized to treatment groups in studies C1221001 and C1221005. Volunteers with any active systemic or immunologic disease/condition were ineligible for study participation. C1221001 was a phase I, open-label, 3-treatment, 3-period, 6-sequence crossover PD/PK equivalence and safety study of a single subcutaneous 6-mg dose of PF-06881894, pegfilgrastim-US, and pegfilgrastim-EU. The washout period between treatments was ≥56 days. The primary PD endpoints were area under the effect-vs-time curve for absolute neutrophil count (ANC) from dose administration to 288 h postdose, and maximum observed ANC value among subjects confirmed negative for anti-pegfilgrastim antibodies. Primary PK variables included area under the serum pegfilgrastim-vs-time curve from the time of dose administration to infinity (AUC0─∞) and maximum observed serum pegfilgrastim concentration (Cmax). Pharmacological equivalence among study drugs was concluded when the 90% confidence intervals (CIs) of the test:reference ratios of the geometric means (GMRs) for primary PD and PK endpoints were completely contained within the 80–125% acceptance limits. PD/PK variables were calculated using non-compartmental methods and step-down testing was used sequentially for study drug comparisons with positive test results. C1221005 was a phase I, randomized (1:1), parallel-group, non-inferiority study conducted to assess the immunogenicity and safety of 2 separate subcutaneous 6-mg doses of PF-06881894 vs pegfilgrastim-US with ~1 month between doses. The primary endpoint for the immunogenicity study was the proportion of subjects with both negative baseline and confirmed positive postdose anti-pegfilgrastim antibodies at any time during the study. The non-inferiority of PF‑06881894 vs US-pegfilgrastim would be demonstrated if the upper bound of the 90% CI for the test:reference risk difference of the primary endpoint was ≤10% of the non-inferiority margin using an exact method. For both studies, the safety variables assessed included treatment-emergent adverse events (TEAEs) and adverse events of special interest (AESI) in all randomized subjects who received ≥1 dose of study medication. Laboratory variables for both studies were assessed and injection-site reactions (ISRs) evaluated for study C1221005.

Results: Altogether, 153 healthy volunteers (HVs) of mean (range) age 30.4 (18−65) years, 52.9% males, were enrolled in study C1221001 and randomized to 1 of 6 treatment sequences. Baseline demographics across sequences were similar. The PD and PK populations each included 143 (93.5%) subjects; 10 HVs who were confirmed positive for anti-pegfilgrastim antibodies were excluded from those analyses. Geometric mean values were similar among the study drugs for the primary PD parameters, area under the effect-vs-time curve for ANC (AUECANC) and maximum observed value for ANC (ANC_Cmax), and the primary PK parameters AUC0─∞ and Cmax. The 90% CIs for the GMRs were completely contained within the predefined 80−125% acceptance limits, thus demonstrating PD/PK equivalence among study drugs (Image 1). Overall, 422 HVs were randomized to receive either PF-06881894 (n=212) or pegfilgrastim-US (n=210) in study C1221005. In both groups, 210 subjects (mean age, 36.6 [range, 18−65] years; 56.4% female) received study treatment. Baseline demographics were balanced between treatment groups. Among the 417 randomized subjects who received ≥1 dose of study drug and had ≥1 postdose anti-pegfilgrastim antibody sample, 12/204 (5.9%) in the PF-06881894 group vs 15/201 (7.5%) in the pegfilgrastim-US group had a negative baseline anti-pegfilgrastim antibody and confirmed postdose positive anti-filgrastim antibody test result at any study visit. Non-inferiority was established because the upper bound of the 90% CI (−5.915 to 2.675) for the risk difference (−1.6%) between treatments was within the prespecified non-inferiority margin of ≤0.10%. No neutralizing antibodies were detected in the evaluable population. In both studies, the percentages of subjects with all-causality TEAEs, serious AEs, and AESIs were comparable across treatments. The most frequently reported TEAEs were musculoskeletal pain, headache, and back pain. Most TEAEs were mild or moderate in severity. The most frequently reported AESI was the category of potential allergic reactions (Image 2). There were no meaningful differences between the percentages of subjects with ISRs (PF-06881894, 5.2% and pegfilgrastim-US, 3.8%) in study C1221005. Laboratory variables were not clinically significant between treatments in both studies. Overall, the presence of anti-pegfilgrastim antibodies had no discernible impact on TEAE trends across treatments.

Conclusion: PF-06881894 demonstrated PD/PK equivalence to US- and EU-approved pegfilgrastim reference products in a single-dose, 3-way crossover study. In the multiple-dose, comparative immunogenicity study, PF-06881894 was non-inferior to US-approved pegfilgrastim. No clinically meaningful differences in safety were observed across treatments within either study and with the established safety profile of pegfilgrastim reference products. Collectively, these studies demonstrate support for biosimilarity of PF-06881894 to Neulasta®. ClinicalTrials.gov identifiers: NCT02629289 (C1221001); NCT03273842 (C1221005) 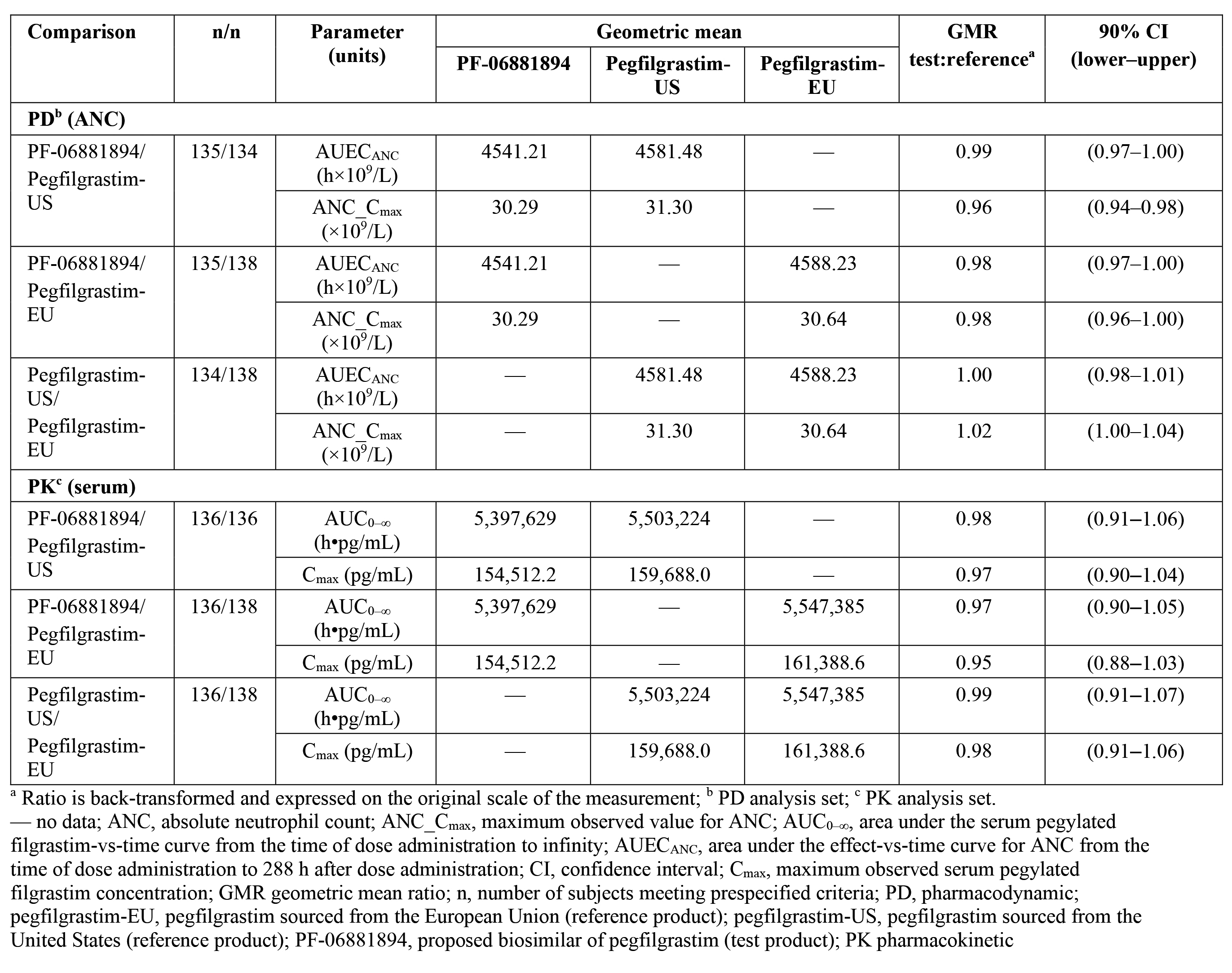