Purpose: The development and advancements in 3D printing over the last decade have directed pharmaceutical research towards the possibility of printing personalized medication. Even though 3D printing is gaining approval and is being utilized for a wide range of applications in the material engineering world, its growth in the pharmaceutical industry is slow. This is due to the lack of regulations which is an outcome of insufficient research to support its application in dosage form manufacturing. The purpose of this research was to understand the impact of fill density of 3D printed devices (i.e. tablets) on the release of a biopharmaceutical classification system (BCS) class II drug from hydroxypropylmethylcellulose acetate succinate (HPMCAS) based 3D printed dosage forms.

Methods: The model drug (ibuprofen) and the polymers (HPMCAS HG, MG, LG) were first characterized using differential scanning calorimetry (DSC) to evaluate their melting temperature (Tm), glass transition temperature (Tg), and degradation temperature (Td). Based on the thermal characterization and available literature, a hot-melt extrusion process was designed for the formulations with 20% drug load. The extruded filaments were analyzed for their texture to evaluate their feasibility for fused deposition modeling-based 3D printing. Suitable filaments were used to 3D print tablets (10 x 4mm) with different fill densities ranging from 20-80%. These tablets along with the individual components, physical mixtures, and extrudates were exposed to thermal characterization, spectrophotometric characterization, textural characterization, and release testing. The data acquired were statistically analyzed to determine whether fill density played a significant role in defining and controlling the release profile of the formulations.

Results: The preliminary thermal evaluation suggested that the drug has a melting temperature of 75-78°C, whereas the polymer has a glass transition temperature of >120°C. Considering the preliminary thermal behavior of the excipients, the extrusion was processed at 130-140°C, with an RPM of 50 producing a torque ranging from 650-690Gm. The extruded filaments were found to be suitable for the FDM based 3D printing process. On DSC and X-ray diffraction studies of the extruded filaments, and 3D printed tablets, no trace of crystallinity was observed, confirming the formation of amorphous solid dispersions. The drug content was found to be within regulatory range (M = 95.58%, SD = 0.5%). The tablets released less than 2% drug at pH 2 over 2 h. After the pH shift (pH 6.8), formulations with different fill densities were observed to release the drug at different rates with 20% showing the fastest and most complete drug release and 80% depicting a slow and incomplete drug release.

Conclusion: From the current results, we can report that the amorphous solid dispersions (ASDs) of the drug and the polymer was developed, which can be confirmed by the absence of crystallinity in the extrudates and tablets. Further, the prepared filaments were suitable for the FDM based 3D printing of tablets. Moreover, there was a trend observed in the release profiles of the dosage form where the fill density was controlling the drug release. This opens up new avenues in the manufacturing of patient-specific therapies, where the same filaments can be printed with different fill densities (and drugs) to control the release of the loaded drugs as per the patient’s requirements. Further statistical studies are underway to develop a model that can predict the fill densities required for the HPMCAS based dosage forms to attain a specific release profile. 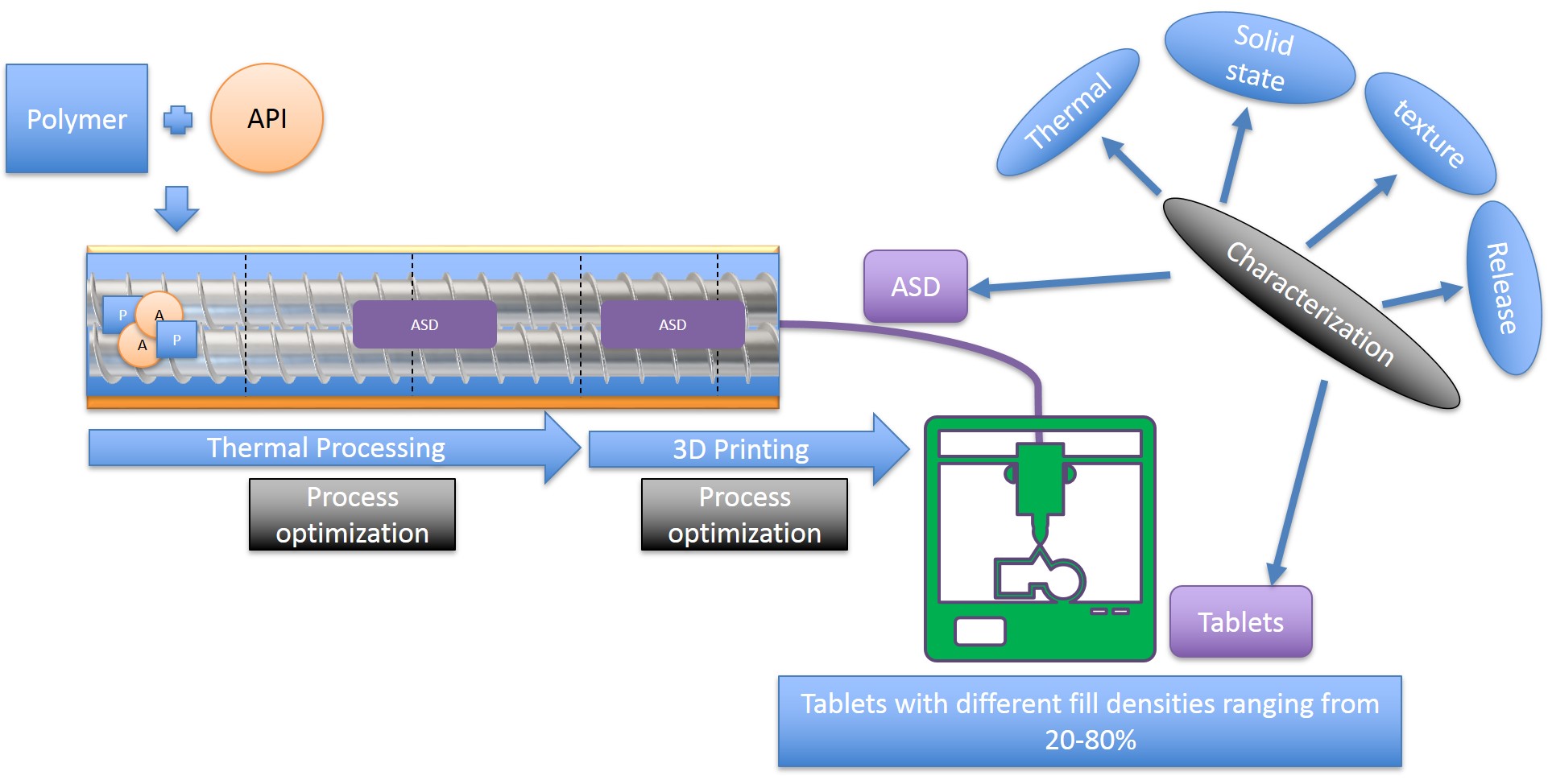 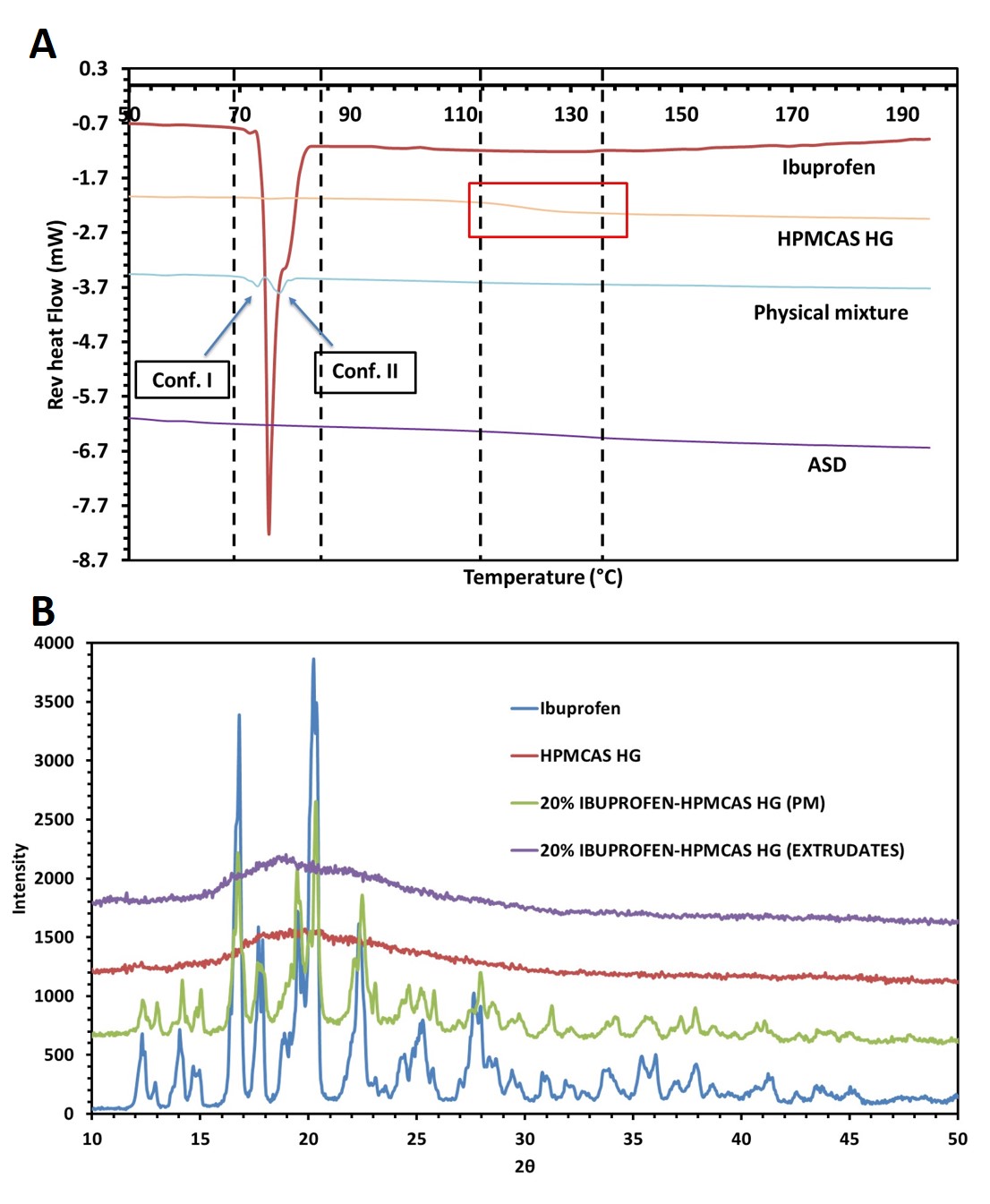 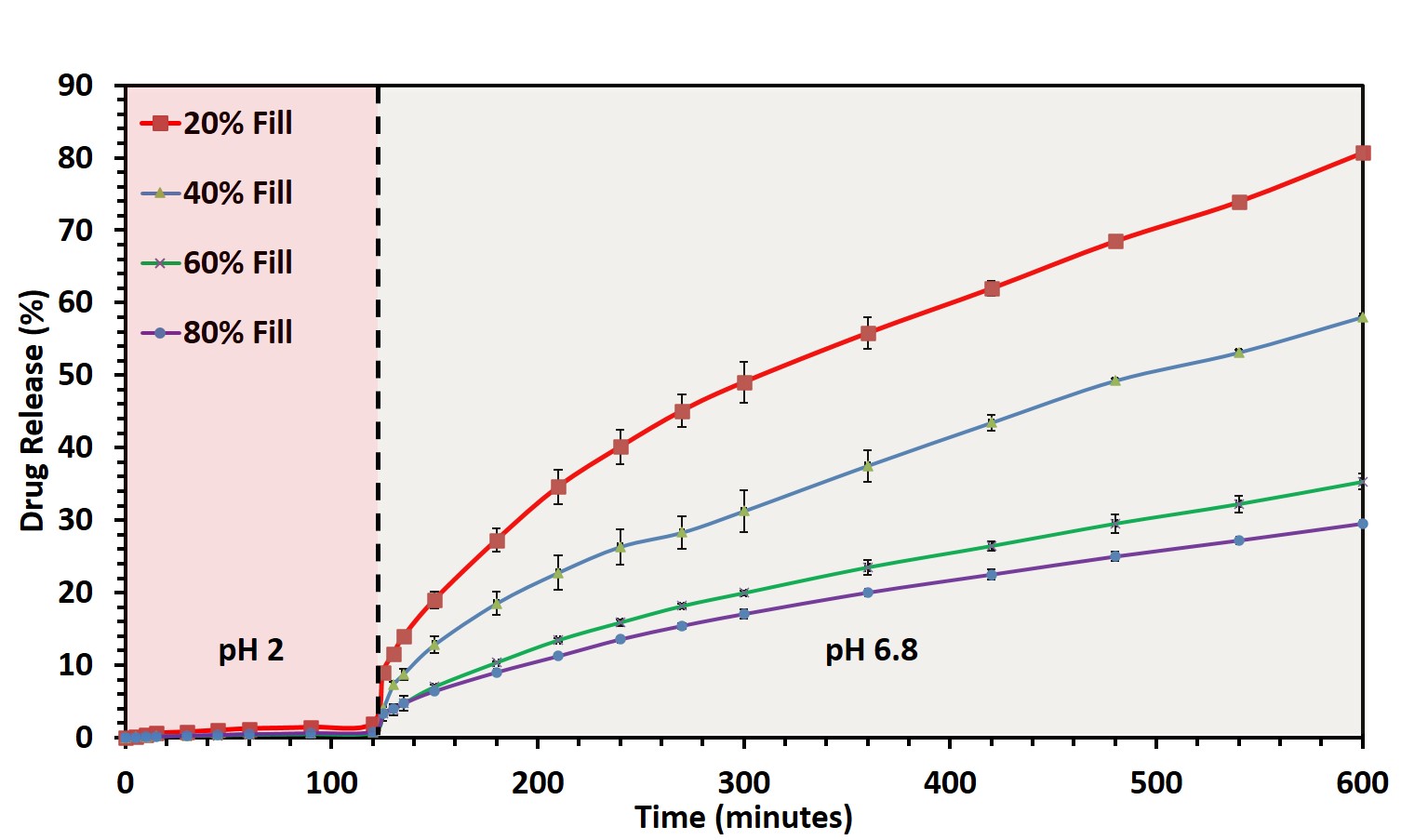