Purpose: Antibiotic resistance is a serious public health threat leading to incessant demand for new methods of novel drug target identification. The identification of the mechanism of action of new antibacterial agents is a major bottleneck for new agent development. Our research in this area has focused on four aspects of bacterial physiology: 1) Known biosynthetic pathways in bacteria. 2) The effect of antibiotics on the metabolites in these pathways. 3) Resistance mechanisms to agents targeting these pathways. 4) And the identification and characterization of novel agents targeting resistance mechanisms. In prior studies, we have examined the effects of a number of antibiotics on intermediate levels in cell wall biosynthesis (CWB) pathway in Methicillin Resistant Staphylococcus aureus (MRSA), which reveals dramatic (up to 3000 fold) and rapid changes in metabolite levels using liquid chromatography-tandem mass spectrometry (LC-MS/MS) based methods that allow quantification of all the cytoplasmic intermediates in this pathway. We have recently developed key tools that would significantly facilitate drug target identification and thus expedite the emergence of novel antibiotics. To facilitate the LC-MS/MS approaches for biomarker identification and mechanism of action (MOA) determinations, a pilot study on the effect of vancomycin on MRSA was performed. In this study, an amine targeted approach based on light and heavy atom isotope labeled Marfey’s reagent is compared with an untargeted liquid chromatography-high resolution mass spectrometry (LC-HRMS) approach for the identification of potential biomarkers of vancomycin action against MRSA. This methodology focuses on experiment with different set of drugs to determine statistical significance for each metabolite to be the drug target and to compare the whole metabolome in an experiment with known target of an antibiotic.

Results: Two strategies were tested: untargeted LC-HRMS strategy and an amine-specific metabolite focused approach using Marfey’s reagent as an amine labeling reagent. To enable the identification of modified amines, and the stoichiometry of modification, a stable heavy atom isotope labeled Marfey’s reagent was developed. Peak lists from the derivatization of samples with both light (L-Mar) and heavy (H-Mar) readily allowed modified amines to be identified (Figure 1).This approach has so far identified 80 mono-adducts, 20 di-adducts, and several potential triadducts in S. aureus. This amine-targeted approach is being compared to an untargeted approach for the identification of biomarkers for the effect of vancomycin on MRSA. Principal component Analysis (PCA) can use the identified principal component to distinguish Control (C) and Vancomycin (V) treated MRSA samples sample subsets that would figure out metabolites with high contribution and have strong influence to the distribution of the data (Figure 2). The samples sharing similar features are distributed close to each other. This would separate the data into subgroups when available and identify the subsets of samples that reflect the relative variation of the multidimensional data associated with different drugs under study. Important features were designated by fold-change analysis with threshold 2. The red circles represent features above the threshold. Values are on projected on log scale, so that both up-regulated and down-regulated features can be plotted in a symmetrical way (Figure 3).

Conclusion: The new method would significantly facilitate drug target identification and thus expedite the emergence of novel antibiotics. The above-mentioned soft ionization MS-based methods could broadly, analytically and precisely study the MOA, and provide evidence such as the drug targets, to provide better support for drug discovery and combat antibacterial resistance. 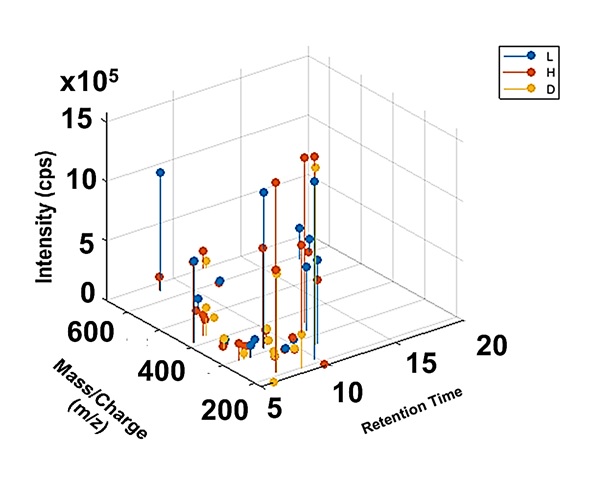 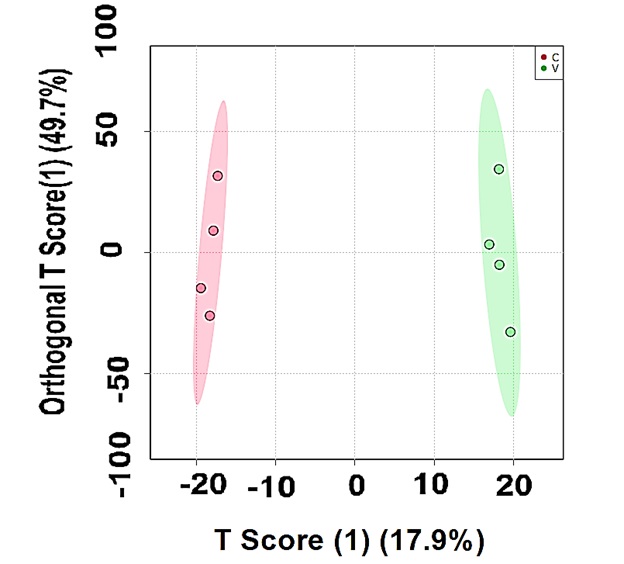 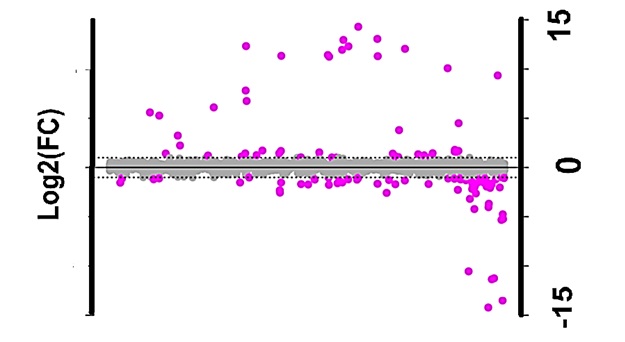