Purpose: The objective of this study was to develop an amorphous solid dispersions (ASDs) for the poorly soluble Atorvastatin calcium trihydrate via hot melt extrusion (HME) and to investigate the physical stability of the ASD.

Methods: In the present study, Atorvastatin calcium trihydrate (ACT), PlasdoneTM S630 (P-S630), were employed as a poorly water soluble drug and polymeric carrier, respectively. Physical mixtures of ACT and P-S630 were sieved through ASTM #30 mesh and then mixed for 15 minutes in a V-blender (GlobePharma, MaxiblendTM). Hot melt extrusion was performed using a co-rotating Prism Eurolab 16mm twin-screw extruder (Thermo Fisher Scientific, USA) with a 3mm diameter die, length to diameter (L/D) ratio of 40/1 and at a temperature of 180 °C, screw speed of 100 RPM. The obtained extrudates were milled using a Fitzmill (FitzPatrick, USA) through a #20 mesh sieve at 1200 rpm. The milled extrudates were characterized by differential scanning calorimetry (TA Instruments DSC 2500) to understand and confirm the nature of ACT in amorphous solid dispersions. Interactions between ACT and P-S630 were investigated by FTIR (Agilent Technologies, Cary 660, Santa Clara, CA). Assays of ASDs samples were performed using an HPLC (Waters Corp., Milford, MA, USA) method. Further, in vitro dissolution studies of pure ACT and ASDs were performed in 900 mL of water for 60 min using USP apparatus II (SR8-plus, Hanson) at an agitation speed of 50 RPM and the drug release was evaluated using a UV–Vis spectrophotometer (Genesys 180, Thermoscientific) at 245nm. The physical stability of solid dispersions was assessed at 40°C/75% RH in HDPE containers.

Results: Initial extrusion trials conducted at 160°C and 170°C at 50 RPM resulted in high processing torque values above the instrument limit. Extrusion at a process temperature of 180°C and a RPM of 100, resulted in acceptable processability and the extrudates obtained were transparent light yellow, brittle, and easy to mill. The formation of ASD was confirmed by DSC analysis  and no crystalline peak of ACT was observed in the thermogram. The DSC analysis of stability samples indicated that ASD produced by HME was amorphous and displayed no phase separation at 40°C/75% RH, within 2 weeks. There was no significant change in assay between initial and 2 weeks stability samples indicating ACT is physically and chemically stable in the ASD. In vitro dissolution data (Figure. 1) of milled extrudate powder demonstrated significant improvement in the dissolution rate for ASDs with 97% drug being released within 15 min compared to pure crystalline ACT which showed 64% drug release in 60 min.

Conclusion: ASD produced via HME processing is a valuable tool to enhance the solubility and bioavailability of poorly soluble drugs. Results from the DSC studies showed that ACT was molecularly dispersed within the matrix of P-S630 and the ASD showed a significantly higher dissolution rate compared to pure ACT. The 2 weeks stability data revealed the physical stability of ACT within the ASD formulations. 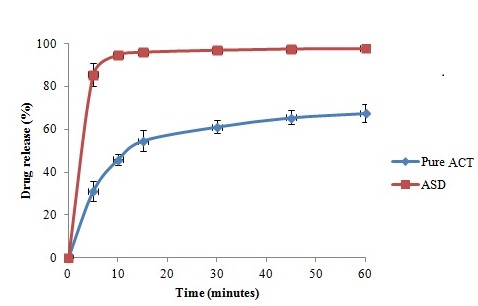