Methods: 20% (w/w) of Theophylline (TPL) was blended with 60% (w/w) of polymer and 20% Poly Ethylene glycol (PEG) 1500 in a Maxiblend™ (GlobePharma, New Brunswick, NJ, USA) at 25 rpm for 15 minutes. PEG 1500 was used as a plasticizer. The blends were extruded using an 11mm corotating twin screw extruder (Thermo Fisher Scientiﬁc, Waltham, MA, USA). A customized screw configuration was used to improve the processability. The obtained extrudates were milled to 3 mm in size. In vitro drug release studies were conducted in simulated salivary fluid (SSF) of pH 6.8 and 0.1N HCl of pH 6.8 media using a type I apparatus (SR8-plus, Hanson) at 50 rpm. The formulations were also characterized by differential scanning calorimetry (DSC) and FTIR. Further, the bitter threshold comparison was performed where a known quantity of the taste masked formulation was mixed with 10 ml of distilled water and shaken for 60 seconds. The concentration of the drug in the water was assessed using UV–Vis spectrophotometer (Genesys 180, Thermoscientific).

Results: It was observed that SS 100P started degrading at 210℃ and the melting point of theophylline was found to be 276℃. The Tg and degradation temperature of the polymers observed were similar to the reported values. The melting peak of theophylline at 276°C disappeared in the thermograms of the extrudates, inferring that the drug converted into an amorphous form. The FTIR results showed that there was no atypical interaction between drug and polymers, but instead, the formation of weak hydrogen bonds – typical of amorphous solid dispersions. All formulations showed excellent taste masking properties with less than 4% drug release in salivary pH in the first 2 min, as seen in Fig 1. In the range of 30 – 60 sec, SS 100P showed the lowest drug release, i.e., best taste masking performance, an important attribute for orally dissolving products. ANOVA analysis showed that there were no significant differences in the release profiles of SS 100P and EPO and that of EPO and MAE. However, SS 100P showed significantly lower drug release (more efficient taste masking performance) as compared to MAE due to their differences in solubility profiles. i.e., SS 100P is highly insoluble in salivary pH whereas MAE is freely soluble in salivary pH. EPO and SS 100P exhibited complete drug release in acidic media (Fig 2). While SS 100P showed 86% of drug release in 2 h, there was 100% drug release achieved from EPO in 2 h in 0.1N HCl. This faster release from EPO might be because of the more hydrophilic nature of EPO due to the presence of a methyl group instead of an ethyl group in SS 100P. As expected, MAE did not show any release in 0.1N HCl. It showed only 6% drug release in 2 h because of its insoluble nature in pH < 5. This is characteristic of polymers with enteric or gastroresistant properties. The solubility of free drug in water was found to be around 135µg/ml which is similar to the reported bitter threshold (108 - 162 µg/ml) of theophylline. The solubility of theophylline from formulations was found to be 25 to 40 µg /ml. This shows that all polymers suppressed drug release in water, showing significantly less solubility compared to the threshold level of theophylline. However, there was no statistically significant difference (n = 3) in the solubility values of the three polymers.

Conclusion: The study showed that all polymers were highly effective for taste masking theophylline. They also showed excellent processability in HME in the presence of PEG 1500 as plasticizer. Kollicoat® Smartseal 100P showed the lowest drug release in SSF, which was statistically similar to EPO, but significantly lower than MAE. Moreover, EPO and SS 100P showed almost 100% release in 0.1N HCl media in 2 h. But MAE showed gastric protection with just 6% drug release even after 2 h. Thus, Kollicoat® Smartseal 100P was found to be an effective taste masking polymer with fast release in acidic media. 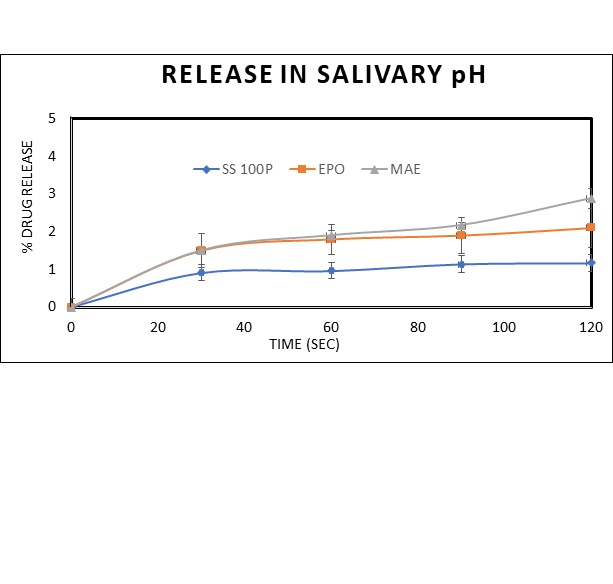 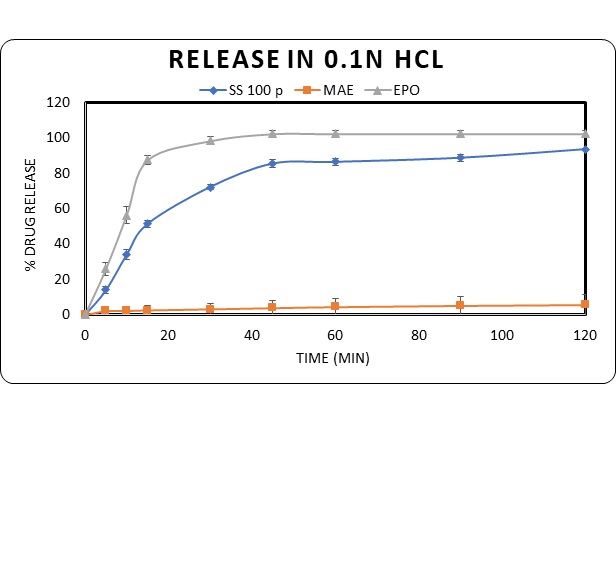